Review: Get an edge with the Streamlight Wedge flashlight 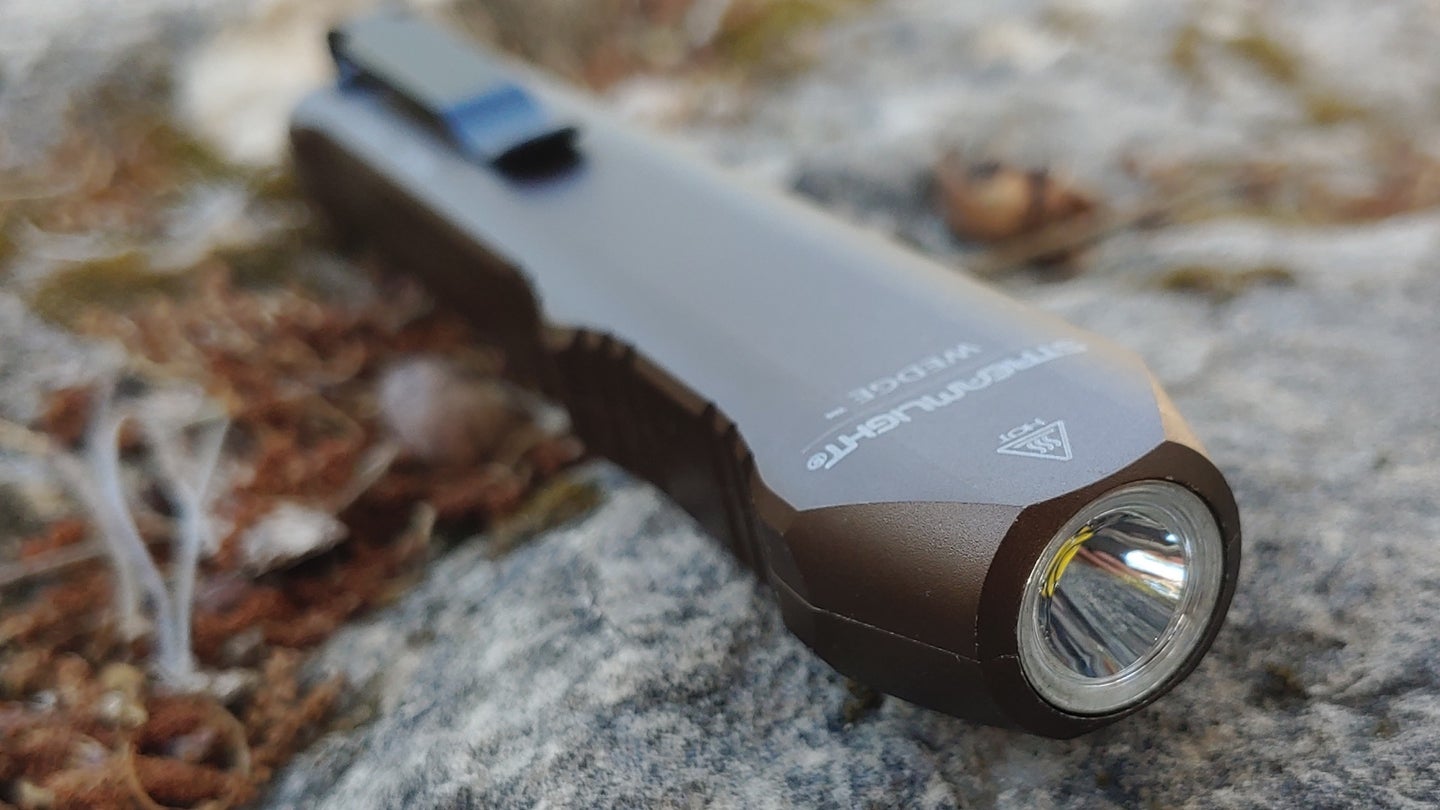 There are lots of companies out there that make flashlights of all kinds, from headlamps and weapon-mounted lights to flashlights, spotlights, camping lanterns, and more. Streamlight is one of the few companies that produce all of those light types mentioned above and beyond, and it’s the reason it’s one of the two main companies trusted by law enforcement and military forces worldwide for both handheld and weapon lights.

I’ve had lots of experience with Streamlight. I utilized a Streamlight Sidewinder for two deployments as a Marine, and the majority of my firearms wear Streamlight weapon lights. The company has produced dozens of various EDC lights that range from stylus-sized to big boys that require a belt pouch, and it’s a brand I trust after more than a decade of use.

With the Streamlight Wedge, however, we are dealing with something quite different than the company’s previous lights.

Editor’s note: the Streamlight Wedge also made Task & Purpose’s roundup of the best EDC flashlights of the year.

When the Wedge premiered at the end of 2020, I was intrigued. What drew me to the Wedge was the flat design it features. It’s not round like most small everyday carry lights and looked to be about the width and general shape of a pocket knife. For an EDC light, flat makes a lot of sense. When something lives mostly in your pocket, the flatter it is, the more convenient it is for daily carry.

(Light nerds will point out that Surefire, the other big light company, did it first with the Stiletto. Yeah, sure, the Stiletto is flat, but it’s much wider and pocket filling than the Wedge. That’s not a slight at the Stiletto, as it does pack more power, but the Wedge seems far more pocket-friendly for daily carry purposes than the Stiletto.)

Outside of the flat design, the 300- to 1000-lumen power drew me to the Wedge. Before this flashlight, my EDC light was a little 100-lumen penlight from 5.11 Tactical. Don’t get me wrong, the penlight served me well, but the Wedge offered me three to ten times the power in nearly the same sized model.

The Streamlight Wedge is proof that big things come in small packages. Here’s why it might end up as your EDC flashlight of choice.

I received an early production sample directly from Streamlight, and as such, my boxing will likely differ from retail packaging. My Wedge came in a plain white box, with some instructions, a short USB-C cable, and a lanyard. The Wedge comes in either black or FDE, and I have the FDE variant. The finish is anodized, which ensures it’s quite tough and dependable but also looks very nice.

I ditched the lanyard as the Wedge comes with a robust pocket clip. The super-thin and single-control design ensures that there is no right-handed or left-handed use with the Wedge. It’s completely ambidextrous, and you can swap the pocket clip from side to side for carrying on either side.

Grooves along one side provide you a very sure grip and make it easy to hold with wet or gloved hands. The on switch sits near the front of the light.  I’d recommend you use a fencing grip on the light, as its small size conforms well to the hand.

The Wedge measures 5.46 inches long, is 1 inch wide, and just over half an inch thick. At 3.3 ounces with the built-in rechargeable battery, it’s quite lightweight. It slides easily into a pocket, as you’d expect. The pocket clip allows it to slide deep into the pocket without becoming obtrusive.

How we tested the Streamlight Wedge

As an everyday carry light, the best way to test it was to carry it every day. I live a pretty active life. I work a mix of indoors and out, I adventure on weekends, and to be, a light is often as handy to have as a pocket knife. I might need to navigate hazardous terrain in the dark, or I might just need to find a toy dropped under a car seat.

When I forget my light, I almost always regret it. So I strapped on the Streamlight Wedge every day. I woke up, put my pants on, tucked on my knife and light, and went about it. The Wedge rode shotgun on a controlled burn, on our first yearly kayaking trip, and everywhere in between.

Speaking of kayaking: the Wedge sports an IPX7 waterproofing rating, meaning it can be submerged up to 1 meter for half an hour. While it didn’t get that wet kayaking, it got damp and functioned without issue. I also dropped it in a Tupperware container full of water and let it sit for half an hour (OK, more like 33 minutes because I kind of forgot about it), yet it persevered.

The USB port at the rear is completely waterproof, and I thought it might be a weak point. If so, it’s yet to show itself as weak. The Wedge is also rated shockproof for a 1-meter fall. I went beyond that and dropped it from shoulder height onto a wood deck a dozen times, and it didn’t tap out. The finish wasn’t even scratched.

I utilized the light at night to solve a few problems. One night, I awoke to a terrible noise under my house—something banging around under there quite loudly. With the Wedge in one hand and a .22 handgun in the other, I entered the crawl space under my home. I would’ve been a terrible tunnel rat in Vietnam because I immediately regretted my decision. As I crawled, I realized the Wedge’s square shape made it easy to squeeze between your teeth when you need a hand-free option. I wouldn’t advise this for comfort and general dentistry, but it does work well.

This is where I have to mention the Wedge’s power. The Wedge’s standard beam cast a 300-lumen beam backed by 1,200 candela. Users can also use the THRO mode, which casts a 1,000-lumen beam backed by 3,000 candela. This is important because I didn’t want to get close to whatever was under my house. THRO works by pushing the on toggle forward one more position and will hold the 1,000-lumen setting until the switch is released or 35 seconds pass.

That extra candela propels the bright beam further. I didn’t want to get too close to whatever was making that racket. Wild animals being wild makes them a lot less fun to deal with than you’d imagine. As I got closer, I used the THRO to see an armadillo stuck. Armadillos are kind of stupid, but it’s not likely to attack my face. Half an hour later, I helped the little grunting idiot out and went about my early morning.

I used the Wedge in a wide variety of locations and scenarios and always found its performance top-notch. It seems incredibly durable and very convenient for daily carry.

The rectangular design also makes it easy to juggle multiple items in one hand with the light. I can hold it between my index and middle finger while carrying a handful of gear at night. It’s superbly ergonomic in hand. The switch design is easy to use in either hand and is built in a manner to ensure it’s next to impossible for it to go off in your pocket.

The 300 lumens of cool white light and the optional 1,000 lumens of the THRO provide me a ton of power in a very small package. A 3 hours run time provides plenty of light for plenty of time. The switch also features a battery indicator in the form of a small LED. When it glows green, you’re good to go; when it glows red, it needs a recharge. The USB-C port means I can charge it off the same charger my phone uses, so I always have one on hand in my car, office, and home. It makes it easy to keep the light topped off.

There isn’t a lot not to like about this light. I will say I think you could power down the THRO to 800 or even 600 lumens and have a more efficient light. The THRO could last longer and not drain the battery as badly. 1,000 lumens is great, but the small emitter and 3,000 candela don’t make the best use of so much power. 1000 lumens is bright, but without the candela to push it further, it doesn’t reach its full potential. I think 600 lumens backed by 3,000 candela would likely provide the same effective range, but it’d be somewhat dimmer up close.

My complaints are minor. The Wedge is an outstanding EDC light for your average person. It’s not a Modlite that replicates the power of the sun, but it doesn’t need to be. For EDC tasks, it’s more than suitable power-wise. The unique rectangular design makes it incredibly ergonomic and easy to use in hand and carry in the pocket.

FAQs about the Streamlight Wedge

Q. How much does the Streamlight Wedge cost?

A. MSRP for the Streamlight Wedge runs about $91.79 on Amazon.

Q. When will the Streamlight Wedge be released?

Q. What does THRO stand for?

A. THRO stands for Temporarily Heightened Regulated Output. If it ran at 1,000 lumens and 3,000 candela all the time, it would need to be bigger with more heat conductive electronics. However, for short ‘throws,’ it works fine in the compact Wedge.

Q. What happens after the THRO is used for 35 seconds?

A. The Wedge steps back down to 300 lumens for continuous use. This ensures nothing burns up inside the light, and you get good battery life.

Q. Can you carry the Streamlight Wedge tip-up?

A. No. While the pocket clip is reversible, it does not allow you to change the vertical orientation of carry.

Q. How long does it take to charge?

A. The Wedge takes three hours to charge from empty.