Grab flashlights for your go bag, car, and EDC with these discounts from Streamlight. 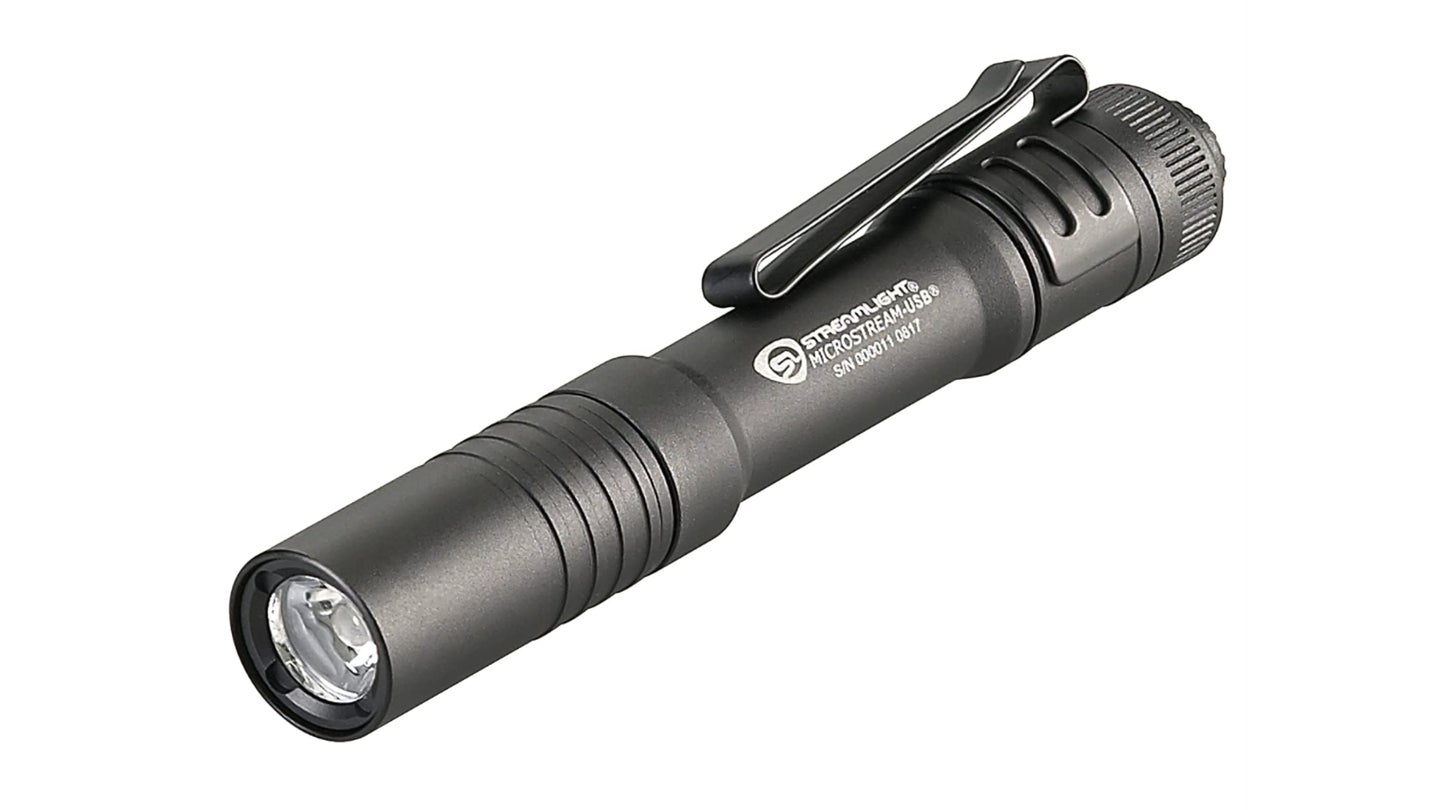 It doesn’t matter if you’re grabbing your EDC gear on the way out the door, packing your car for a trip, or prepping your go bag for the end of times; if you don’t have a good flashlight on hand, you’re wrong. Right now, you can fix that with a flashlight from Streamlight while pocketing big Amazon Prime Day savings.

Streamlight is one of our go-to brands for flashlights because it builds quality products that are tough enough to perform in the field without being overpriced. Unlike some tactical brands, Streamlight puts its money into the products instead of slick social media ad campaigns, and that translates to you spending less on the gear you need.

For Amazon Prime Day, Streamlight is offering up to $76 off its already affordable flashlights. Read on to find one (or more) that works for you.

The Streamlight MacroStream is an excellent choice for your car or get-home bag. It’s about half the size of a Sharpie, has a double-sided pocket clip that can mount the light on a hat brim, and recharges with a micro-USB port that’s protected beneath the flashlight’s sliding aluminum housing. Power modes include high, which produces 500 lumens for two hours, and low, which produces 50 lumens for eight hours. With an IPX4 rating, this light is water-resistant and can hold up to most of the challenges you’re likely to encounter.

The MacroStream has a 4.7-star rating based on nearly 12,000 reviews, so it’s safe to say it’s a hit with the people who own one. Reviews praise this versatile flashlight for its build quality, value, and brightness. There are also a few video reviews so you can see it in action.

“While at work, I was moving skids with the forklift,” one user wrote. “Getting off to straighten a load, I was unaware that my Streamlight fell to the ground. As I finished moving skids I noticed my light laying on the pavement right in the path of the forklift tires; I realized that I had run it over about 3 times. Feeling a bit dumb for not noticing it earlier, I picked it up expecting the worst. However; upon retrieving the light, [almost] all of the damage was superficial — [it] turned on and off just as it had before. The lens didn’t have a scratch and even the pocket clip was still OK.”

Think of the MacroStream as the sweet spot of flashlights. It’s rugged and well built but not overpriced. It’s small and portable, but lasts all night on the low setting and can reach almost 100 yards into the darkness on the high setting. The rechargeable battery makes it that much more appealing because you can keep it operational almost indefinitely with a small solar charger or power bank.

If the big-brother MacroStream is the jack of all trades, the Streamlight MicroStream is the perfect EDC flashlight. It retains the same aluminum construction, micro-USB charging, and two-way pocket and hat clip — all in a package that’s shorter, slimmer, and lighter. It’ll fit into your pocket like a tube of chapstick and make carrying a flashlight everywhere you go much more convenient. The compact size does come at a price: reduced power. The MicroStream offers 250 lumens for 1.5 hours on high and 50 lumens for 3.5 hours on low. That’s plenty for close-quarters work, but insufficient for prolonged use in larger spaces.

Streamlight MicroStream owners give the flashlight a 4.7-star rating with around 7,600 reviews. Plenty of happy customers attest to the MicroStream’s toughness and ease of carry, with photos of well-worn flashlights to prove their points.

“This little light has ridden in my front pocket along with a Leatherman Wave with a pocket clip … for over two years now,” one user wrote. “For two years I’ve been amazed [by] the quality of this light. It has been dropped down steep hills in rocks, totally submerged in water, covered in oil, grease, gasoline, etc., used in extreme temperatures, and just generally abused. It has never failed to work and I think I only charge it about once every three months — and it probably doesn’t need [to be] charged even then. I’ve used it around the home, on the farm, working on equipment, hunting, fishing, off-roading, shooting … and I don’t think I could live without it.”

The Streamlight MicroStream is a compact light that delivers just enough power to keep you on the right track. Adding lighting capability to your EDC is one of the biggest upgrades you can make after a quality blade, and the MicroStream is a fantastic option — especially at this price.

When it comes to lighting up your entire workspace or campsite, the Streamlight Seige is a great tool for the job. This 540-lumen lantern can stand on its own or be hung from its base for an overhead light. The high setting will provide 540 lumens for 30 hours, but you can stretch battery life even further with the medium setting, which is good for 270 lumens and 70 hours; or the low setting, which produces 55 lumens for 295 hours. You can preserve your night vision with a red-light setting or activate the strobe to serve as an emergency beacon. The polycarbonate housing is built to take a beating and floats, so you can trust it in the field.

These features have led to more than 4,000 reviews from happy customers who give the Streamlight Siege a 4.8-star rating on Amazon. Common high points include build quality, versatility, night vision, and brightness.

“As a total LED wonk, I heartily recommend this lantern,” one owner wrote. “For one, unlike many of the lantern makers out there, Streamlight calculates their run-times to only 10 percent of initial value — not down to one percent as so many other companies do — so their run-time estimates are more accurate. There will still be some usable light output at the specified times. The lantern will tell you when you’re close to exhausting your batteries. The built-in battery level indicator goes from green to yellow to red as you approach the end of charge. The button also flashes red if you install one of your D-cells incorrectly (reversed polarity).”

One feature we’d like to see in the future is a rechargeable battery. The Siege currently uses three D alkaline batteries; that means you’ll be spending more down the road, but at least they’re readily available and result in minimal downtime. As long as that doesn’t bother you, this is an excellent camping or emergency lantern — and a tremendous bang for the buck.

If a full-size rechargeable flashlight is what you’re after, the Streamlight ProTac HL5-X is a good option that can also save you some money. Its single button can be programmed to activate your preferred combination of modes, including high, medium, and low output, and a strobe function that’s great for defensive use. Power output tops out at 3,500 lumens, but only if you use the provided rechargeable batteries. Disposable CR123A batteries will reduce peak output to 2,500 lumens. This flashlight carries an IPX7 waterproof rating and a rubber sleeve for impact protection.

Nearly 3,000 customer reviews have pushed the ProTac HL5-X to a 4.7-star rating on Amazon.

“The design is fantastic,” one owner wrote. “You can feel the quality when you hold this light. It is well balanced and the rubberized grip is really nice. It is a bit large to carry on your duty belt but I do wish they offered a drop-in nylon holster for this if you know you are going to be using it away from your vehicle. The brightness of this light is way more powerful than the high beams on just about any vehicle. I would say about 4 times as bright as the high beams on my work truck.”

The fact that both rechargeable batteries have to be removed and plugged in to charge is annoying, but they should last several hours. You also have the option to use four disposable CR123A batteries in a pinch. At this much of a discount, this is a solid addition to your vehicle or pack.

There are times when the ProTac HL5-X is too big, but the MacroStream is too small. When that happens, the Streamlight PolyTac is just right. This compact flashlight is less than six inches long but boasts 600 lumens, a sealed glass lens, three output levels, a strobe function, and a polymer housing that’s lightweight and impact-resistant. Two disposable CR123A batteries will power the PolyTac for 34 hours on low, 5.5 hours on medium, and 2.75 hours on high.

This flashlight, which was designed for military, police, and first responders, has a 4.8-star rating from 2,800 reviews on Amazon. Some owners have posted videos so you can see the real thing in action.

“This is a nice small flashlight that has taken a couple [of] good falls,” one owner wrote. “While crawling around a warehouse this took a fall that was roughly 15 feet onto concrete. Other than a couple [of] scuffs, it came out unscathed. I bought some rechargeable batteries to replace the ones that came with the light but so [far] the life has been pretty good after several hours of use. I like that I can tap the power button and get a dimmer mode for longer life but don’t have to cycle through the settings to turn off.”

If you’re looking for a durable, just-right-sized flashlight, the PolyTac is a great option. User reviews are mixed when it comes to mounting this light to a weapon, but we wouldn’t recommend it. There are better weapon lights out there, so keep this one in your hand.

It goes without saying that we love (good) tactical gear here at Task & Purpose, but sometimes a friendly little light like the Streamlight Pocket mate is all you need to get the job done. This flashlight offers 325 lumens, three power settings, and a clip to mount it someplace accessible. It’s a great option to keep with a first aid kit, roadside emergency kit, or get-home bag. Best of all, it’s rechargeable and tops off in four hours.

The tiny but mighty Pocket Mate has a 4.7-star Amazon rating based on more than 1,000 reviews.

“I bought this to clip onto my dog’s leash so I can see what I’m picking up at night,” one owner wrote. “I’ve had it about a year and never needed to charge it. It has two settings and a continuous button (don’t have to press and hold). I love it enough [that] I plan to buy a second one for backpacking.”

The Streamlight Pocket Mate is a handy piece of kit and costs pocket change right now. Don’t overthink it.