As veterans, we can never fully divorce ourselves from our military service or from the wars we fought in. It... 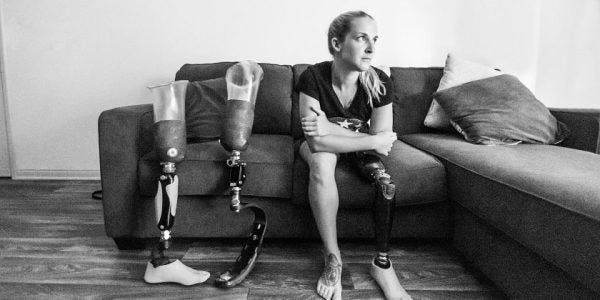 As veterans, we can never fully divorce ourselves from our military service or from the wars we fought in. It is a key part of who we are, but not the sum of all we have done or hope to do.

This is what lies at the heart of The Veterans Project, an ongoing multimedia story and blog created by Tim Kolczak.

An Iraq War veteran who deployed with the Texas Army National Guard’s 141st Infantry Regiment to Camp Taji, Iraq, from 2009 to 2010, Kolczak left the military in 2011.

“When I got out, I didn’t want to have anything to do with the military,” explained the 29-year-old. “I just wanted to get away from the military thing, but not the guys. I loved my unit and I love the guys I served with.”

This feeling stayed with Kolczak, and in 2013, as part of his capstone project for his master's degree at The University of Texas at Dallas, he began profiling other veterans. The project quickly took on a life of its own.

The Veterans Project is a mix of multimedia storytelling, blogging, and photojournalism, but the driving force behind it is Kolczak’s compassionate portrayal of his fellow vets. Moving portraits, deeply personal profiles, and revealing interviews paint a complex and deeply human picture of America’s veterans as they seek to define themselves at home, after the war. All the while, the memories, and for some, wounds sustained in combat, serve as constant reminders of the battlefields they left behind.

“I think what drives us forward is often some of our greatest pain,” explained Kolczak. “That pain for me was losing one of my best friends, Staff Sgt. Carter Chick, an incredible Marine and soldier. I think about that man with every shutter actuation, every word I write, and every story I tell. I feel that profiling a veteran with anything less than my best would be a discredit to him and his legacy.”

Below are five veterans whom Kolczak has profiled as part of The Veterans Project.

Army National Guard Staff Sgt. Carter Chick an Army and Marine Corps veteran who served alongside Kolzcak in Iraq. On Sept. 5, 2015, Chick took his own life.

“There are heroes, yes. There are guys that come home missing both arms, both legs doing a job that very few people have the guts to do. … Guys that came home with missing limbs, Medal of Honor winners, guys that didn’t come home. … They’re the true heroes in my opinion.”

Marine Cpl. Jesse Diana served five years as an infantryman, deploying to both Iraq and Afghanistan.

“Understand that it is okay to not understand us. Don't try to pretend or relate to us because we will never be able to feel that connection. Don't treat us like misfits to society, and just understand that part of serving your country is sacrificing who you once were as a person.”

Army Sgt. Joe Washam was part of a task force searching for weapons of mass destruction in Iraq in 2004 when a chemical fire in a nearby factory caused an explosion.

“I made a decision that would actually save my life. I decided to run. The humvee was engulfed in flames but I decided to jump out and take off anyways. Two other soldiers were killed in that explosion. … I survived the explosion but 40% of my body was covered in burns. 90% of my body is covered in scar tissue.”

Marine Sgt. Kirstie Ennis was critically injured during a helicopter crash in Afghanistan while serving as a door gunner on June 23, 2012.

“I was kind of ripped apart. The last thing I remember was the screaming I heard. I was kind of in-and-out from there. My leg was mangled and snapped, my right shoulder was destroyed, I could fit my fist through my face and my jaw was completely destroyed. … From that moment on, I was just fighting to stay awake.”

“We need to hold each other accountable. When you go back to your town and lose the brotherhood, you start to feel empty. We need to stay up with each other and help each other out. Don’t give up on each other.”

Army Staff Sgt. Terry Saffron was badly wounded by a roadside bomb in Iraq in 2004 following an enemy ambush. Two of his fellow soldiers were killed and he was left with shrapnel all over his body.

“I don't know if being a civilian is a reality to me. I mean I'm not in the military anymore but I don't really know what being a civilian even means anymore. I don't have an amputation. You can can tell I'm not all here because of my brain injuries though. I'm missing a fibula and my face is missing bones, but I'm not wearing a prosthetic so my outward injuries aren't as obvious.”