This Film Shows How The Government Fails Vets On Mental Health

It’s no secret that our newest generation of warfighters has been plagued with a slew of mental health issues over... 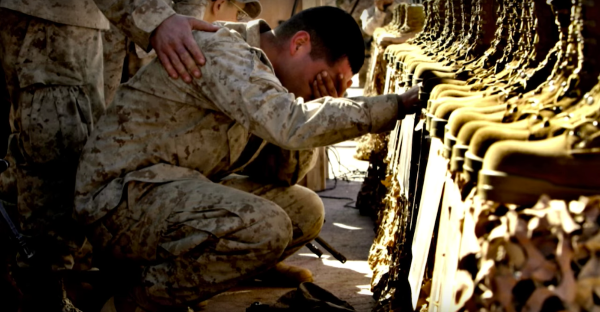 It’s no secret that our newest generation of warfighters has been plagued with a slew of mental health issues over the past decade and a half. Though suicide statistics are somewhat difficult to come by, there's no doubt that diagnoses of post-traumatic stress disorder and other mental health issues affect significant numbers of post-9/11 vets. Who, if anyone, is to blame for this disgrace? And what can be done about it? These are the questions Tom Donahue brilliantly shines a light on in “Thank You For Your Service” — an important documentary for anyone wanting to understand the impact of mental health problems on our veterans.

The film follows four service members to make sense of their actions in war, but does more as well. The film shares a lot of appalling statistics that help contextualize the severity and complexity of the problem while providing a foundation to understand how today’s situation was allowed to happen in the first place.

Donahue draws on more than 200 interviews to share the insight of experts in their field such as Karl Marlantes, who wrote a book on what it’s like to go to war. The film explains what warfighters experience in combat. It also shows high-ranking officials who did their best to address systemic failures from the beginning of our most recent wars, like Dr. Mark Russell. Despite Russell and others sounding the alarm to officials as high as the Veterans Affairs secretary, the VA and other organizations failed early on to prepare for the mental health needs of returning troops.

It would be one thing if military leadership didn’t know about the issues. However, as retired Brig. Gen. Loree Sutton explains, back in 2003 they knew, but they “weren’t allowed to discuss the invisible wounds.” The film gives numerous examples that demonstrate despite the problems being understood and anticipated, they were ignored by some of the highest ranking leaders at the time — leaving countless service members and veterans alone and in pain with little or no options for care. And those who bravely sought to overcome the stigma of seeking psychological help between 2001 and 2012 were often on the receiving end of a 259% increase in narcotic prescriptions from the VA, despite there being only a 29% increase in patients during the same time.

The statistics, stories, and visuals hit close to home for me as a veteran who has struggled with mental health issues. However, arguably the film’s most important accomplishment is to highlight the resilience of our service members and the incredible people that continue to serve them. Experts in the film discuss ways to eliminate stigmas and other barriers to seeking care. Donahue highlights how organizations like Save a Warrior and Lifesavers Wild Horse Rescue use time-tested methods to help vets process their wartime experiences and live their lives to the best of their abilities.

One of the film’s most thought-provoking ideas is to advocate for the creation of a behavioral health corps — an idea originally brought up after World War II. Because behavioral health is generally the lowest priority within the Medical Corps, a standalone corps would alleviate the bureaucratic red tape that prevents the behavioral health of every warfighter from being the priority it deserves to be. Regardless of whether you think this would work or not, the most important thing this gripping documentary does is provide context as to how these mental health problems became so rampant, which will hopefully spark the much needed conversation to address these issues.

“Thank You For Your Service” open theatrically in D.C. on Friday, Oct. 21 for a week run at the Landmark West End and in New York City on Oct. 28 for a week long run at AMC Empire on 42nd Street. Learn how you can also host your own screening of the film.