Recently, a friend sent me a flier and invite for a program teaching critical skills to those veterans going through... 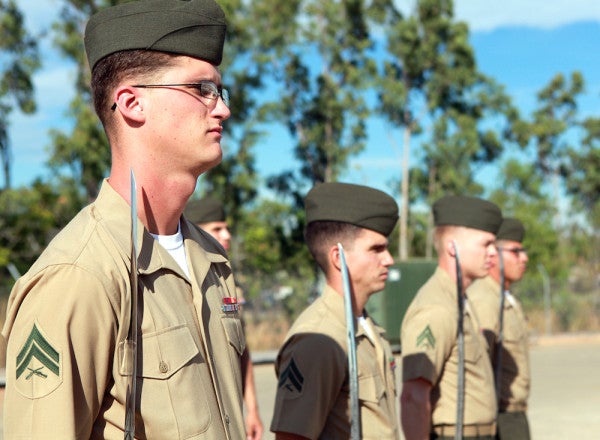 Recently, a friend sent me a flier and invite for a program teaching critical skills to those veterans going through a tough transition period. The administrators work individually with participants to help them determine what their interests might be and how to improve their career opportunities. The flier was great. It said:

Or, come most. The fine print of the one-pager clearly stated that this was for women veterans, but specifically, women veteran officers. The program description also went into some detail about how this program was filling a “critical need” by limiting space to officers because they are most in need of assistance in transferring their leadership skills to the civilian sector.

As a former enlisted female, all I could say was “Ouch.” In a time when female veterans can’t seem to park in a parking spot without receiving nasty notes, or can’t enter a VA hospital without getting a look that asks, “Are you here to visit someone, miss?”, this program was almost as offensive to me. It begged the question: Why aren’t enlisted members good enough to be regarded as leaders in the civilian realm?

The organization was clear in its published assumptions: Female officers are the leaders in the pool of female veterans. The program takes a one-termer, a captain, who unless she held a company command, has a very real chance of supervising fewer personnel than the average staff sergeant.

Task & Purpose covered the disparity between officers and enlisted in the hiring market, but this was a fresh wound for me. It confused me: If you are legitimately trying to help veterans transition, why are you focusing on the demographic that has a very good chance of getting employed quickly in the civilian job market?

To give this organization the benefit of the doubt, I considered maybe they wanted to target college graduates. But if a company or organization is targeting veterans who have finished college, by focusing on officers, it ignores the thousands of enlisted who came in with or acquired their degrees during service, as well as the majority of the chief warrant officer corps. No, if it had been college they wanted, they’d have asked for a resume, not a military job title.

This problem isn’t localized to one organization, either. I recalled an occasion when I sat in the audience of a prominent panel discussion on what companies might do to assist transitioning veterans, and what veterans might do to help companies better understand their value as employees. Of 12 panel members, just one was enlisted and a successful entrepreneur. The rest — the ones who actually applied to their post-military positions — were all officers. A brave enlisted soul stood to pose a question: How can we help companies understand the leadership capabilities of the enlisted, particularly those enlisted who took the time to complete their college educations, because enlisted struggled more to find suitable employment?

The officers practically tripped over each other in their efforts to respond. The highest-ranking member of the panel won out, and stated: “There is no disparity. Every officer has just as many problems when getting out with the same number of years. Next question.” The other officers, to include two females, harrumphed their agreement. The lone enlisted sat silently, outvoted.

I wanted to leave the audience. At the time, I had a master’s degree in a technical field, 10 years in the service, a lot of varied experience, but I couldn’t land a job because every interview still consisted of the question, “So, if you had a degree, why didn’t you become an officer?” The panel was wrong: There was a disparity. The assumption seems to be there’s something wrong with those of us who decided we loved our jobs on the ground with the plebes and the grunts and the dirt.

This women veterans officer organization was just another kick to the gut. My friend who forwarded the opportunity asked if she should see if they’d make an exception. No, I don’t want an exception. I want them to list the real qualifications. Don’t tell me what rank I should have achieved or what path I should have chosen, tell me what I needed to accomplish. Do you want people with a college degree? Do you want advanced degrees? Do you want a certain number of years in a management role? Do you want people looking to stay in their field, who are looking to change, or who don’t know what they want?

To organizations out there looking to help bridge the wide chasm between military and corporate institutions: We need you. We need help. But there are millions of us, and we are a diverse group that needs assistance, both officer and enlisted. Stop assuming rank makes right. We are out of the military; rank means nothing. Experience does. Education does. Change your questions to what we did rather than what our collar said we did. Evaluate leaders in practice rather than leaders on paper. You might be surprised at what you learn.