Long before James Mattis was Secretary of Defense, he was a Marine general known throughout the Corps as a tough-talking,... 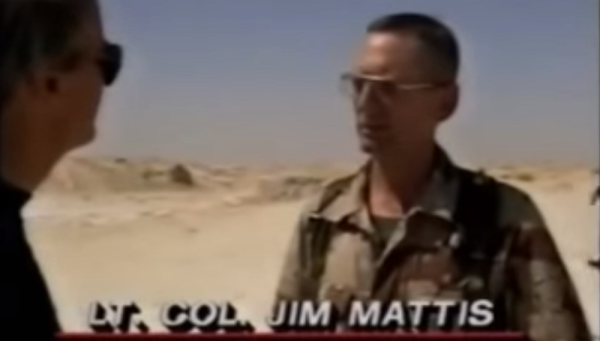 Long before James Mattis was Secretary of Defense, he was a Marine general known throughout the Corps as a tough-talking, no-bullshit commander. But everyone has to start somewhere. So, if you’ve ever wondered what “Mad Dog” Mattis was like before he earned his nom de guerre from the media — his preferred nickname is reportedly his old callsign: CHAOS, meaning the Colonel Has An Outstanding Solution — you’re in luck.

In the broadcast, legendary NBC News anchor Tom Brokaw asks Mattis how his Marines are holding up: “These are Marines, but they're young kids, they've never been in this situation before… Are they having to deal with nerves, as well?”

Now, keep in mind, this is the same Mattis who famously told reporters during a panel discussion on Afghanistan at the San Diego Convention Center that “It's fun to shoot some people” — and that was just back in 2005. “I'll be right up there with you,” the then-three-star general said. “I like brawling.”

Related: 10 Things We Learned About Mattis From That ‘New Yorker’ Profile »

So how’d a Marine whose characteristic frankness has earned his missives their own designation respond to Brokaw’s question? “No. They're pretty calm, pretty matter of fact,” Mattis said, rocking a pair of BCGs that have since been replaced by some other interesting choices in attire. “They know what's expected of them and they're all hard charging and ready to go.”

Though when Brokaw asks the Marines if they’re nervous, the answers are a bit different. Someone probably had to fill a few extra sandbags after that.