These Oakley sunglasses are a $215 GWOT participation trophy, and they used the wrong ribbon

Bro, do you even veteran? 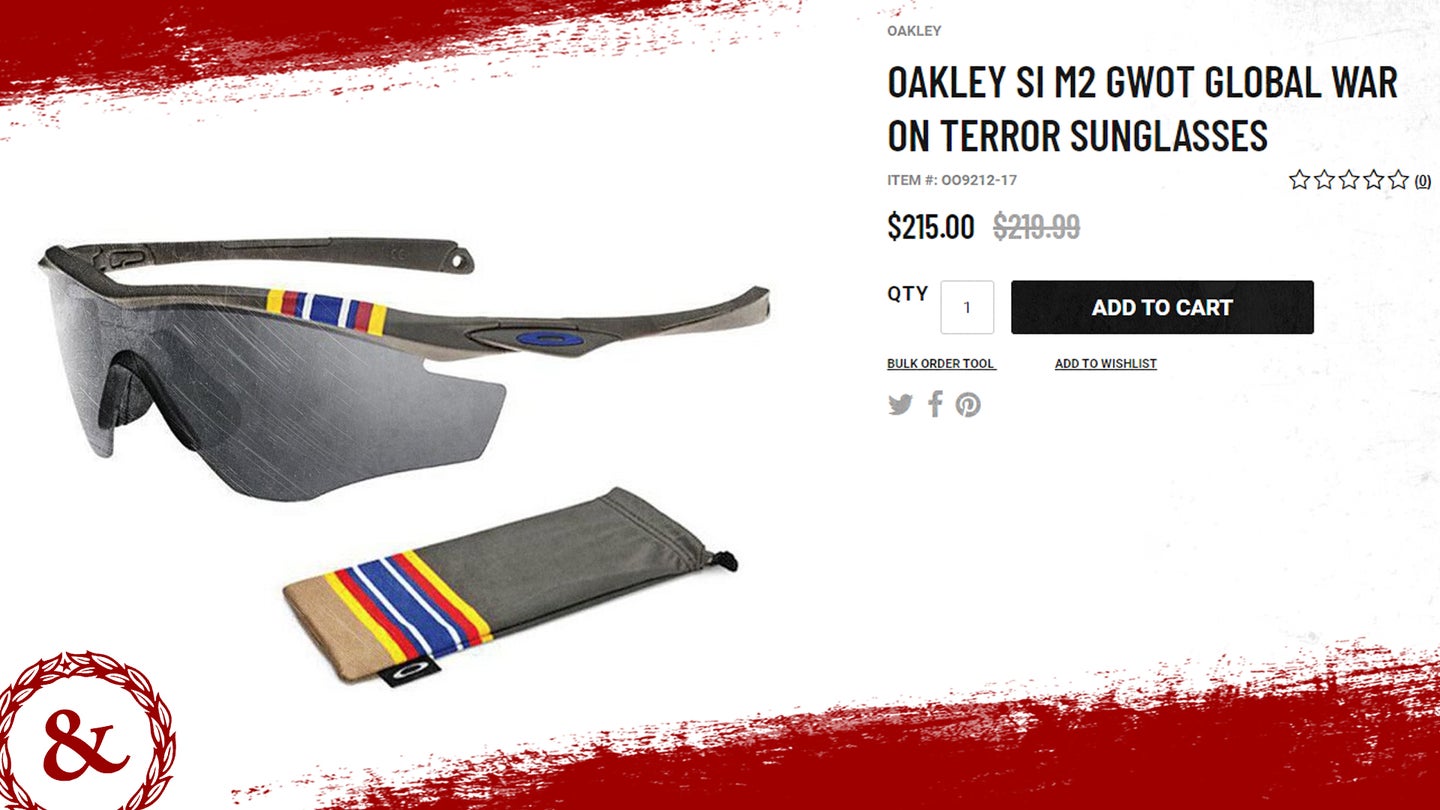 If you’re looking for a surefire way to let the world know that you played a role in the Global War on Terror — and went broke at the same time — then these Oakley sunglasses might be for you:

Yes, these are real, and there’s a lot to unpack here, so stay with me.

The shades are officially titled the Oakley SI M2 Global War On Terror Sunglasses, and like the decades-long and globe-spanning conflict for which they’re named, at $215 they ain’t cheap. But you know what they say: You can’t put a price on freedom, or faux-patriotic impulse buys, for that matter.

It doesn’t seem like the shades are still available for purchase on Oakley’s official site, however, they can be found on other digital markets, like eBay, or for sale on U.S. Patriot Tactical, which notes that the high-performance frames and lenses are made to be durable, impact-resistant, and provide UV protection — all of which are pretty on-brand for Oakley’s sunglasses, which are more common at military bases than lifted pick up trucks or muscle cars.

After taking a closer look at this high-priced piece of eye-protection, I have to pause and say “wait, what the fuck?” Not only do these glasses show off what is essentially a freebie award, upon closer inspection it looks like they actually put the wrong ribbon on them. Yeah, that’s right.

This is the ribbon for Global War on Terrorism Service Medal.

Note the pattern of the stripes on the GWOT ribbon, and how the last two bands on either edge are blue, followed by gold, and then red as they move inward. According to federal regulations for the medal, “the dark red stripe denotes sacrifice. The gold stripes symbolize achievement. The blue stripes signify justice.”

So, there’s that. Next is the fact that the GWOT service medal is, to put it bluntly, a participation trophy. For most of the 2000s and on into the early 2010s, the GWOT medal was one of two awards that everyone was guaranteed to get, just for showing up to the recruiter’s office — the other was the National Defense Service Medal, which is awarded for serving during a time of war.

The official criteria for the Global War on Terrorism Service Medal reads as follows: “All service members on active duty, including Reserve Components mobilized, or National Guardsmen activated on or after September 11, 2001 to a date to be determined having served 30 consecutive days or 60 nonconsecutive days are authorized the Global War on Terrorism Service Medal.” This essentially means that a month after arriving to your unit, once you’ve finished boot camp and training for your career field, you’ll end up with your second medal and the beginnings of your own Chesty Puller starter kit. There’s a lot more to be said about just how off the rails the military award process went during those early GWOT years, but the short version is: This ribbon is generally just seen as a “gimme.”

Tell you what, if you’re really desperate to telegraph your service to the world, how about you buy a slightly cheaper pair of Oakley shades, then send me $50 and I’ll ship you some super glue and my GWOT ribbon — I’ll toss in the medal for good measure — and you can assemble an actual set of GWOT shades yourself. Sounds like a win-win to me.

Watch next: Military tattoos are something else.