Why Some Service Members Can’t Afford To Feed Their Families

The nonprofit hunger-relief charity, Feeding America, recently released a study that concluded one out of four households with a current... 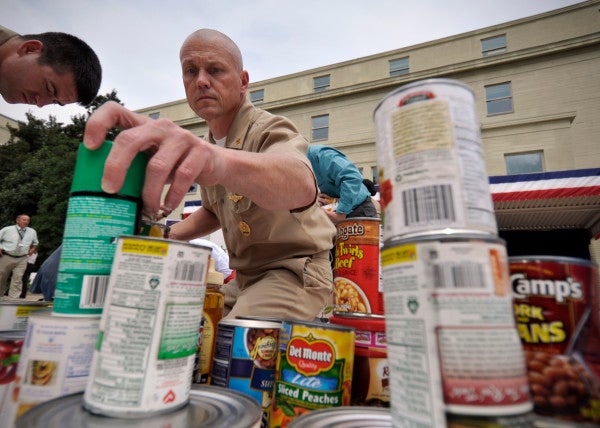 The nonprofit hunger-relief charity, Feeding America, recently released a study that concluded one out of four households with a current military member required assistance from the group’s 196 networks of food banks throughout the United States in 2012.

Feeding America’s spokesperson Maura Daly explained to Task & Purpose, “Many food banks that are in close proximity to military bases are reporting a high percentage of client households with a member currently serving in the military.”

However, in response to the study, Department of Defense officials stated that the outcome of the survey paints an inaccurate picture because it surveyed households instead of individuals, then compared those numbers to military data. (A more detailed analysis of the numbers can be found at the Defense in Depth blog.)

“There are many factors that go into military compensation, including pay grade, years of service, location, availability of various special and incentive pays and dependency status,” Navy Lt. Cmdr. Nate Christensen, a Department of Defense spokesman, told Task & Purpose.

“Military compensation, which includes pay and benefits, compares favorably with the private sector,” said Christensen. As an example, Christensen cited Army privates, with less than two years of service and no dependents, who earn on average $41,000 figuring in base pay, housing and food allowances. An Army captain with six years and no dependents earns nearly $100,000.

I have no doubt that there is a nugget of truth to Feeding America’s survey and local food banks and charities consistently providing service members and their families with assistance.

But aside from the flawed methodology for conducting the survey, one issue that has largely been ignored by Feeding America, as well as all of the articles and news programs calling attention to the survey, is the topic of personal lifestyle choices and financial responsibility. I liken this to a saying I heard many, many times throughout my military career: The military mirrors society. While this has practical and impractical applications, we shouldn’t be all that surprised to see stories like this in media headlines or be oblivious to what military communities are really like. There’s the good, the bad, and the ugly in every sector. Including the military.

The technology boom of the past 20 years is nothing short of a miracle that has advanced and accelerated every professional field in America. It behooves mankind to be forever grateful for the good it continues to serve in the medical, scientific, educational and military fields of study. However, I continually see a decline in humanity, unlike the history books really thought to predict, when it comes to our relationship with our current technologically advanced United States. The slow growth and then immediate exploding effect technology has on retail and advertising awesomeness has helped the United States turn into an over-indulged, over-consumed, over-medicated, and super-sized, free for all.

We are a super-sized nation that buys big and spends big. Two very expensive wars, subprime lending, and the 2008 financial disaster should have been wake-up calls to this testament of buying big and “Keeping up with the Joneses.” But sadly it wasn’t, and many civilians have a complicated relationship with money. Many service members do, too.

Money is emotional and when it’s compounded by 13 years of multiple, stress-induced and often emotion-laden deployments, service members are bound to develop money disorders and no check-the-block redeployment training is going to keep one from falling into that trap.

In addition to the generous military living and healthcare entitlements, service members may be eligible to receive deployment and hazardous duty incentive pay, hardship duty pay, assignment incentive pay, hostile fire/imminent danger pay and special duty pay, as they should with the sacrifice’s made of an all-volunteer force.

Think of that Army private with less than two years of service and no dependents who earns on average $41,000 annually. The addition of generous incentive pay available can easily push his/her earnings to nearly $50,000 in one year.

This pay is significantly raised when a service member earns more rank and also has family members to support.

However, many service men and women have seen the emotionally charged spending before, during and after deployments. We’ve all known someone, heard a story, or supervised a soldier, sailor, airman, or Marine who came back from a deployment and bought a $45,000 car only to find upon inspection that his/her family was living in filth and the children barely fed.

Or the service member who hastily rushed into a relationship or marriage only to find that the spouse emptied his bank account and skipped town. This became so frequent a problem that leaders of U.S. Forces Korea established a regulation to protect service members from fraudulent marriages.

I have personally known military families that were forced to use federal assistance programs and food bank assistance because the service member consistently blew his paycheck at local strip clubs and bars within the first week of a pay period.

We have all heard the horror stories and this certainly does not represent the entire military community. Many families are just poor money managers, but instead of embracing the financial management resources offered, they continue to overspend, overbuy, and overindulge without skipping a beat.

There are hundreds of free, comprehensive resources available to service members and many ready, willing, and able leaders within the military who truly care about their subordinates financial health and well being.

There are very, very few legitimate reasons a service member or his/her family should ever be faced with hunger, but there needs to be a more open conversation about personal lifestyle choices and the consequences they have on military readiness before we start laying blame.