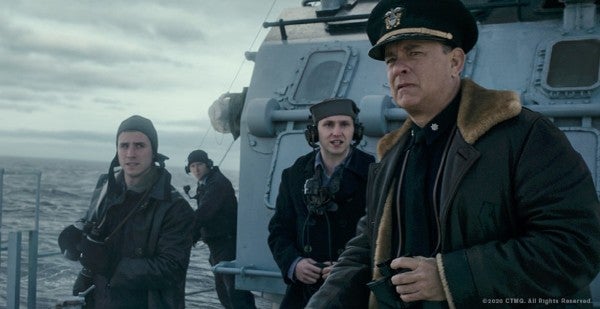 Starring Hanks as Cmdr. Ernest Krause, Greyhound takes place during the beginning of the war, as the Navy destroyer, USS Kealing, sets sail across the Atlantic Ocean.

The mission: Escort a convoy of Allied supply ships across open waters, with limited support and absolutely no air cover.

As Task & Purpose previously reported, the script, which Hanks had a hand in writing, is based off The Good Shepherd, a novel by C.S. Forester. In the original source material, Krause is a career Navy officer, but the mission marks his first war-time post as a ship's captain — which draws some nervous glances from his crew when he admits that in the trailer.

And their concern is more than justified, as the convoy of ships is being hunted by marauding German U-Boats.

Given Hanks' work on numerous war films and series over the years — from Saving Private Ryan, to Band of Brothers — it's likely Greyhound will balance non-stop action with character development and dramatic storytelling.

So, if watching America's dad sink a bunch of Nazi submarines sounds like a good way to spend an hour-and-a-half, it might be worth checking out Greyhound when it hits Apple TV this week.