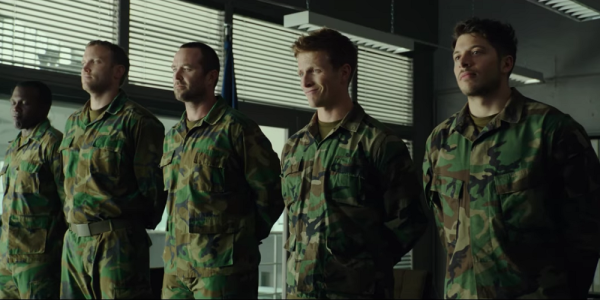 It’s 1995 in Sarajevo and a rogue team of Navy SEALs are driving a stolen tank through war-torn streets as enemy soldiers and tanks pursue them. Explosions abound and rounds zip by, before the commandeered kill machine pulls a hard left off a bridge and plunges into a river.

That’s roughly five seconds of the two-minute trailer for “Renegades,” an upcoming action flick about a group of highly trained Navy SEALs who go off the reservation in the middle of a warzone to snatch a cache of Nazi gold worth millions. The team, led by Sullivan Stapleton from “300: Rise of an Empire,” hatch a desperate plan to recover the gold, which is located far behind enemy lines, in order to give it back to the locals.

Based on the trailer, “Renegades” seems like it’ll be a bit of a mash-up of “Oceans 11,” “Kelly’s Heroes,” “Three Kings,” and the “A-Team.” Really, just think of it as your typical heist movie, but with a ton of guns, Nazis — because why not — Navy SEALs and J.K. Simmons as the stern, no bull-shit commanding officer.

This movie looks campy, but if you’re in the mood for something that puts a premium on massive explosions, comedic relief, and at least one sex scene, then keep an eye out for “Renegades,” which hits theaters February 2017.

In the meantime, check out the full trailer below.