The Warfighter’s Guide To A Combat Playlist

When “Fortunate Son,” by Creedence Clearwater Revival, comes over the speakers, everyone’s mind immediately jumps to one thing: the Vietnam... 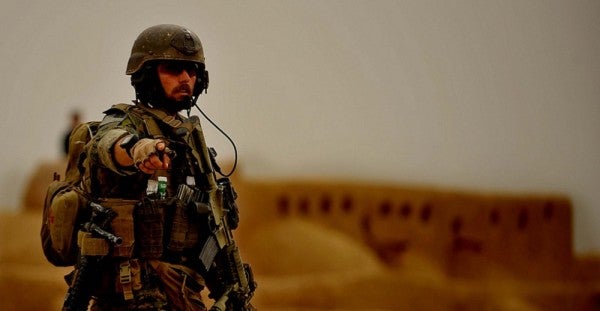 When “Fortunate Son,” by Creedence Clearwater Revival, comes over the speakers, everyone’s mind immediately jumps to one thing: the Vietnam War. Between the song’s lyrics and its presence in war movies, the anti-war protest song is virtually synonymous with that conflict.

Now, think of the wars in Iraq or Afghanistan: Is there any song that embodies those conflicts the same way? No, and it’s something Jason Kurtzhals wants to change.

“You have songs from the Vietnam era that are synonymous with that era,” the DJ and Iraq war veteran tells Task & Purpose. “But we don’t have a song. We have artists like Toby Keith and Five Finger Death Punch and Chris Daughtry that sing about it, but if someone were to hear that song, and go ‘that song means the war in Afghanistan,’ ‘that song means the the War on Terror,’ I don’t think you’re going to find it.”

The former airman hosts Frontline Radio, part of Slacker Radio, an online music app, which features song submissions from service members and veterans as well as stories explaining where they were on deployment when they first heard it.

His goal is to help build out a playlist for our generation’s wars, he says.

“But if we do something now to make that happen, it might change a few things,” explains Kurtzhals. “Like OK, we brought actual soldiers, sailors, airmen, and Marines together to build a playlist about songs that they listen to, let’s make that happen now so the future generations can look back, and say ‘oh yeah, music actually did mean something to these guys back then.’”

Kurtzhals deployed to deployed to Nasiriyah, Iraq, from 2008 to 2009, as a part of the tactical security element for a detachment with Air Force Office of Special Investigations, and operated out of Ali Air Base.

As was the case with many of us, music was a constant on Kurtzhals’ deployment, and now, years later, it’s a reminder of his time in the military and of those he served with.

“They weren’t just songs that people listened to on their way home from work, like this is what kept people going,” he says. “This is what motivated them.”

We asked Kurtzhals what songs would be on his ideal wartime playlist and why.

“The Catalyst,” by Linkin Park.

One night while eating in the chow hall, the base came under indirect fire. As part of the base’s quick-reaction force, Kurtzhals and his team raced back to their tent to gear up and respond to the attack. According to Kurtzhals, this song brings him back to that moment every time he hears it.

“When I think about that moment, just blowing through barricades and saying ‘screw you’ to the MP’s who were trying to block us off, and going around them, and shit like that just so we could get our gear, get in our trucks, get mounted up, and head out,” he explains. “That song really kind of seals the deal for me in terms of something that meant what that moment kind of meant to me.”

“School’s Out,” by Alice Cooper

On their last mission before returning home, Kurtzhals’ truck commander had one final announcement for his men: school’s out.

“So he took over the comm system and he put that song on, and was like ‘school’s out, you guys are done, you’re no longer under my supervision you guys can do whatever the fuck you want,” says Kurtzhals with a laugh. “I love that song still. It was perfect for what it actually meant.”

“All Summer Long,” by Kid Rock

“It was the dead heat of summer, I think it was like 123 degrees that day, one of the hottest days we were there,” says Kurtzhals. “We were next to the Euphrates river during a patrol and that song came on over the head set and I just kept thinking ‘I’d love to back in Northern Michigan right now.’ … Meanwhile I’m here in the dirt, sweating my ass off.”

But for a moment, he was able to escape, and that’s an important part of any good wartime playlist.

“It’s a song you hear back home and you can bring it to wherever you are and it still takes you back home,” he says.

As a .50-cal gunner, he had to be able to lift his weapon system, all its ammo, and other assorted equipment by himself, so before he deployed his master sergeant told him he’d have to bulk up.

“I didn’t weigh too much at the time, I think I weighed about 200-pounds and he was like ‘I’m giving you a couple months before we deploy to get in shape. Your job is just to get as big as you can, as strong as you can,’” says Kurtzhals. “So I needed a song to just push me through the gym. You’ve gotta be a beast and be able to lift some heavy shit and not falter, so the best song for that was ‘Superbeast’ by Rob Zombie. During deadlifts, squats, bench, all that stuff, it made me think ‘like alright, you’ve gotta be a beast.’”

“Sunday Bloody Sunday,” by U2

While Kurtzhals and his team finished their pre-deployment training they were stationed at Fort Dix, New Jersey, which meant they were under “General Order No. 1” he says, adding that meant “no drinking, no fucking, no whoring, no whatever.”

Fortunately, Kurtzhals and two of his friends had access to a government vehicle, and a 24-hour PX that sold beer.

“We just grabbed a six-pack of Coors Light and turned on the radio, tuned the car off and ‘Sunday Bloody Sunday’ came on by U2 and we just sat there and we drank the beer, we didn’t get drunk or anything, we didn’t get hammered, but it was just like ‘this might be our last beer. Who knows what could happen in the next eight to nine months, so let’s just enjoy this moment while we have it,’ and we did. So the song definitely takes me back to that moment.”

“Touchdown,” by T.I. and Eminem

When his team was flying into Iraq from Saudi Arabia, his driver, a New Yorker with dramatically different music tastes, found a way to put his mind at ease.

“We didn’t see too eye-to-eye on music. He liked a lot of hip-hop and rap. I was more into classic rock, country, alternative, hard rock,” says Kurtzhals. “He was like, ‘look we’re going to touchdown there, we’re going to have a good time, we’re going to be just fine, I’m your driver, you’re in safe hands … just listen to this song, it’ll calm you down’ and he put on ‘Touchdown,’ and it was fitting for the moment, because we were flying in, and we were in good hands; I trusted him.”

“Even now when I listen to it, I still think of him and it’s just a good song to have in my playlist, for sure,” adds Kurtzhals.

“I was saving this one for last,” says Kurtzhals. “Our call sign was ‘Raven’ when we first arrived and we wanted to change it. It’s stupid, everyone’s called fucking ‘Raven.’ What’s unique? What’s edgy? What’s probably going to get somebody pissed off at us? So, our master sergeant was like ‘well, we stole some equipment from the Army, stole some shit from the Navy, to make our Humvees a little bit better, we swindled the Navy out of some ammo and shit like that. So we’re hustlers, we’re like pool hustlers. We make it look like we’re a simple little Air Force team and don’t know what the fuck we’re doing, but in the meantime we know exactly what we’re doing and exactly what we want to get, so we’re hustling people for it.”

“So he’s like ‘OK, we have a new callsign now, it’s going to ‘Hustlers’ and we’re going to listen to this song before we go out on every mission, and it was Rick Ross’ ‘Hustlin',” and it was just kind of one of those songs,” says Kurtzhals with a laugh. “OK, my uncle was in Vietnam, my grandpa was in World War II, I had another uncle in Korea. They had these magnificent defining moments, but my defining moment that I have to tell my kids about someday, is that my fucking callsign was from Rick Ross’ ‘Hustlin’.’’’