SOCOM Is Looking For A New Multi-Caliber Sniper Rifle

On April 6, U.S. Special Operations Command released a sources sought notice asking for companies who are capable of producing... 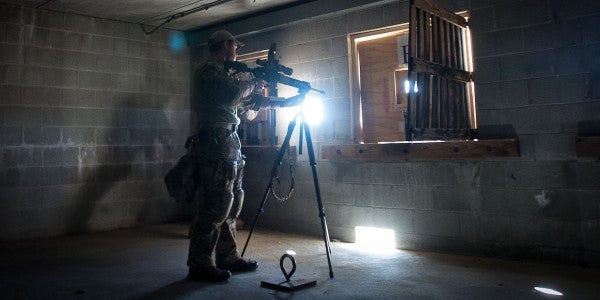 On April 6, U.S. Special Operations Command released a sources sought notice asking for companies who are capable of producing the next generation of sniper rifles.

In a significant departure from traditional sniper rifles in the military inventory, the new Advanced Sniper Rifle would need to be capable of shooting 7.62 NATO, .300NM, and 338NM with the use of a conversion kit. It also needs to be extremely accurate, with the desired outcome being a rifle that can hit .5 Minute of Angle (MOA) at 300 meters for the 7.62 and .300, and 1.5 MOA at 300 meters for the .338.

The document also calls for the rifle to be no heavier than 13 pounds and no longer than 40 inches. It will also need to come with a light and sound suppressor, which means three different suppressors would be needed — one for each caliber.

This sources sought notice is very interesting considering the Army just announced last year that Heckler & Koch is replacing the M110 SASS and its predecessor the SR-25, which both shoot 7.62 NATO. Additionally, in March 2013, SOCOM awarded a nearly $80 million contract to Remington for 5,150 Mk-21 Precision Sniper Rifles. The Mk-21, like the specs given in the notice for the ASR, is a modular rifle system capable of shooting 7.62 NATO, .300WM, and .338 Lapua.

SOCOM is an organization that rapidly evolves with current and future threats, and is known for adapting its equipment to suit the next mission, not the last one. It’s possible that the Remington’s Mk-21 has not performed well in the field, forcing commanders to reconsider the organization’s preferred sniper platform. It also might be due to the increased defense spending that is expected under the Trump administration, which may allow the special operations community to upgrade their rifles more than what they were able to in 2013.

The document, which was first reported by Soldier Systems, is not a request for proposal, and will only be used for market research and planning, but may result in some companies being invited for an open discussion with the government at some point in the future. With a deadline of April 24 to submit a response to the inquiry, it’s unlikely that anyone other than the major players inside the military weapons circle will be able to meet that deadline with all the information requested.