But how will it handle in the field? 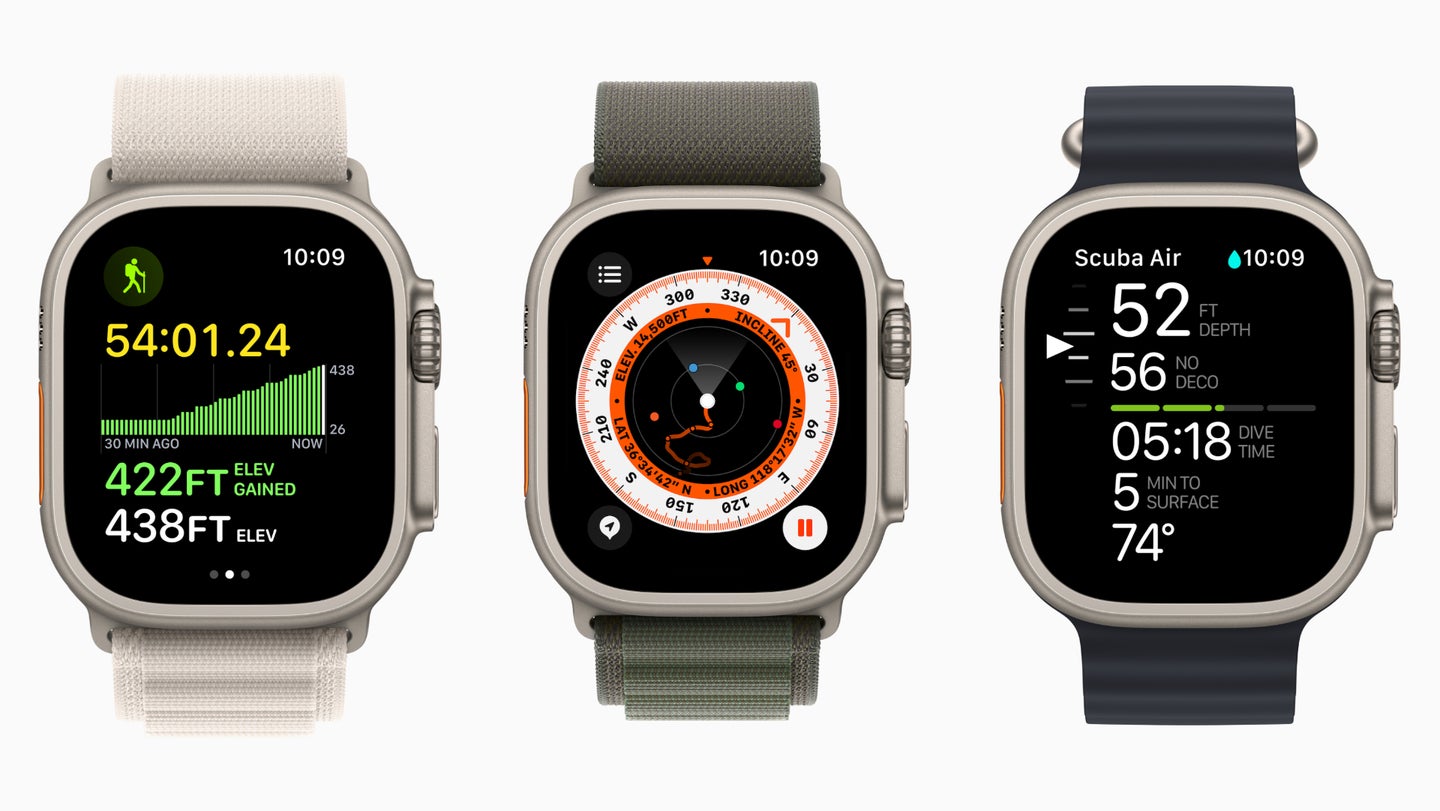 Smartwatches have long been divided into two distinct categories: those that are basically just wrist-mounted cellular devices and those that are so-called “adventure watches,” which are designed as GPS devices and fitness trackers first with some smartwatch features second. Apple watches have always occupied the former category, channeling the DNA of their sleek and utilitarian iPhone, iPod, and iPad ancestors rather than that of the more rugged, rough-and-tumble Garmin watches which evolved from a line of portable GPS receivers. This delineation has led many folks to choose Apple for the everyday smartwatch and Garmin for more extreme activities.

Now, it appears, the two categories have collapsed in on each other with Apple’s latest smartwatch offering. On Wednesday, the company announced the Apple Watch Ultra, a bigger, bolder, and more durable device than any of the Apple watches that came before it. The question is: is it rugged enough for the field or still just another expensive timepiece fit only for the S-shop?

The Ultra enhances the design language of the company’s Series 7 smartwatch by adding a number of features that make it much more of an adventure watch and much less of a fragile status symbol. New to the Ultra is the titanium case and sapphire crystal, which both enhance the watch’s durability and bring it more in line with the high-end traditional field and dive watches that remain popular right now. Indeed, the watch is MIL-STD-810H certified and subjected to rigorous testing to ensure it maintains its functions in even the most austere conditions.

Also new to the Ultra is improved water resistance, offering 100 meters in still water. Apple states this feature will make the watch durable enough to take dives as deep as 40 meters, which is more than enough for most recreational divers. On top of that, the Ultra meets EN 13319 standards, which is a commonly-accepted standard for dive computers and depth gauges. The company has even said, in typical Apple fashion, that “there’s an app for that” and promised that diving accessory manufacturer Huish Outdoors will develop a dive computer app as a companion to the Ultra.

All of this is to say that Apple wants the Ultra to be the watch that you can rely on for most of your outdoor adventures, no matter how intense.

​​​“Inspired by explorers and athletes from around the world, we created an entirely new category of Apple Watch designed for new and extreme environments — it’s the most rugged and capable Apple Watch yet,” Apple COO Jeff William said in a statement introducing the Ultra, which he dubbed “a versatile tool that empowers users to push their boundaries with adventure, endurance, and exploration.”

But the Ultra is not just more rugged, since Apple isn’t just aping Garmin with this watch; in fact, there are some additional features that Apple fans in particular will gush over. The display on the Ultra follows the trend toward larger displays that’s been established by the iPhone, measuring a whopping 49mm in diameter and making for an extremely readable screen. This readability is further aided by an ultra-bright retina display, which Apple advertises as their brightest yet at 2000 nits, which is two times as bright as any existing Apple watch display. The Ultra also features improved microphones and speakers to further enhance phone calls, even without AirPods; this is combined with noise-reduction software to ensure that even during outdoor activities, the wind won’t be as much of an issue as with previous iterations.

There are a litany of other features, but one question that remains is whether or not this will be something that will supplant Garmin watches for fitness and outdoor use, or just become a more larger version of the venerable Apple watch. Several features stood out to me as pointing to the latter, rather than the former. For example, the battery life is 36 hours of normal usage, which is high for Apple watches but not great when you compare it to options from Garmin. In addition, the Ultra suffers from the same dinner-plate disease that afflicts Garmin, Suunto, and Coros GPS watches by chewing up a ton of wrist space.

Then there’s the question that’s probably on the average reader’s mind: is this actually rugged enough for use by a U.S. service member? In terms of durability, the titanium case and sapphire crystal as well as the enhanced water resistance are definite wins for the Ultra, and the super-accurate GPS, compass function and low-light display mode are other tools that are handy in a field environment. But that’s where potential military applications end: the fact is, a significant number of the Ultra’s advertised features are focused on fitness tracking and various extreme sports rather than wilderness survival or military use. While the Ultra might compete with lower-end Garmins like the Forerunner that are explicitly for use for physical fitness, you don’t have to get rid of your Fenix or Tactix just yet.

All in all, the first thing that came to my mind when I first saw the Apple Watch Ultra was “finally, those Marines who insist on wearing Apple watches in the field will be able to wear them without breaking them.” To that end, I am very interested to see how the Ultra performs as the company finds new ways to spread its infectious branding and loyal fanbase to the world of rugged outdoor smartwatches.

Apple Watch Ultra is available to order now with availability starting on September 23.