Review: Jetboil’s MiniMo is a versatile camping stove for your next backcountry adventure

A top choice for backpacker teams who want to boil or precision cook. 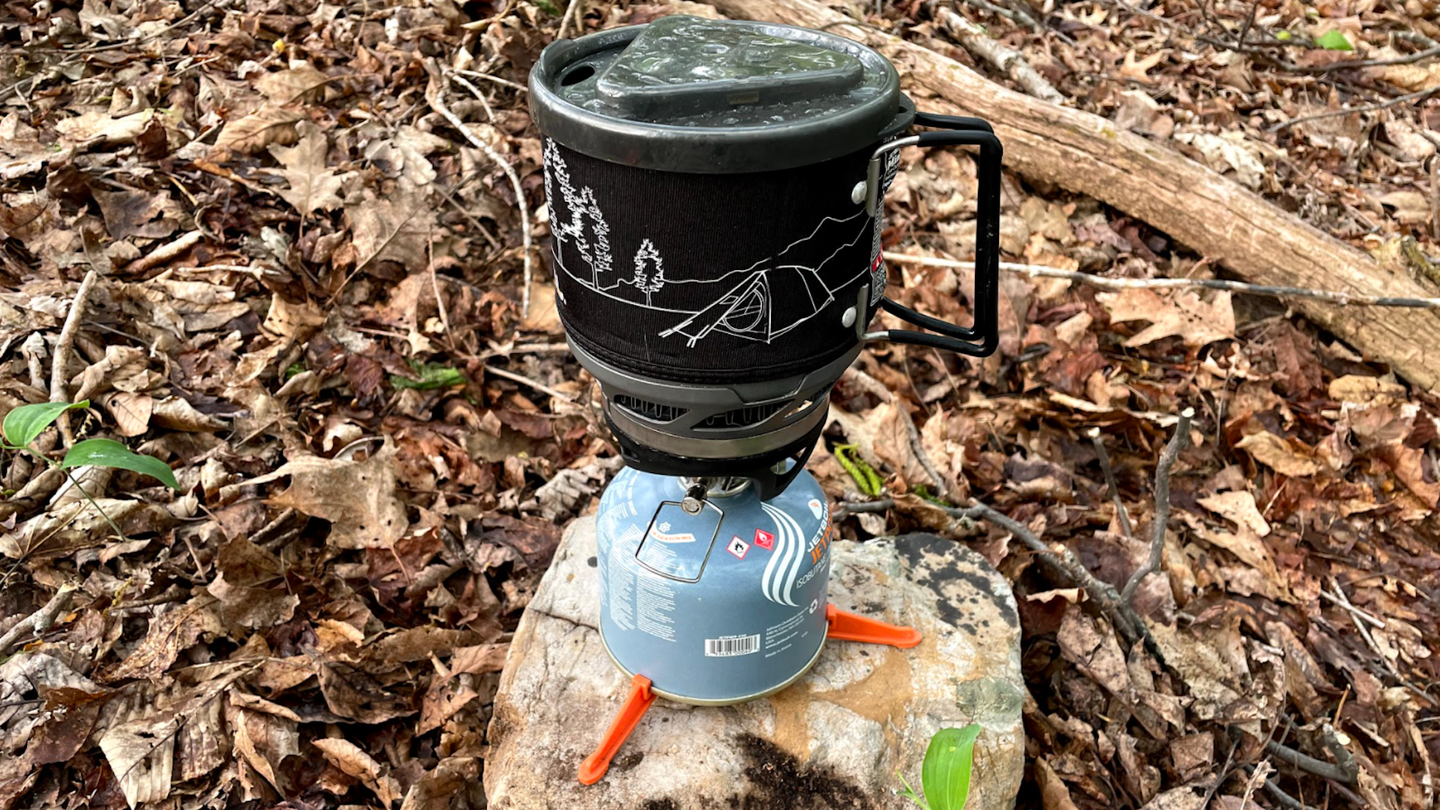 In the Spring of 2015, my wife had a great idea. “Let’s hike the Appalachian Trail,” she said. I liked this idea for two reasons. First, it was a big goal: freshly retired from the Marine Corps, I was looking for something physically and mentally challenging to do. Second, I’ve had a life-long fascination with the trail, its history, and its culture.

As I started taking inventory of my mountaineering gear, I realized the Coleman Peak 2 stove that I bought back in 1992 was pretty much shot and needed to be replaced. For me, a backpacking stove is a must-take for trips into the backcountry. I don’t mind suffering when moving, but when I get to camp, I like a hot, comforting meal. Where the potential for hypothermia is a concern, stoves can be lifesavers.

I was working at the U.S. Naval Institute at the time, so I headed over to the Eastern Mountain Sports store in Annapolis, Maryland which has since unfortunately closed. While I was inspecting the selection of camp stoves, one of the store clerks asked me if I needed some help. I told her that we were about to start section-hiking the Appalachian Trail and I was looking for a reliable, lightweight stove to take along. She mentioned that she and her friends had completed a thru-hike the previous year and used several stoves over the six months she was on the trail. She told me she liked Jetboil the best. I remember her telling me, “They heat water in a flash, are really light, and I’ve never had any issues starting them.” She said she carried the Jetboil Flash model, but offered that I might want the larger version since I’d be cooking for two people and pulled the MiniMo down from the shelf.

The MiniMo is a canister stove, meaning that the burner unit screws into and sits atop a metal fuel canister. The stove is composed of seven parts: a triangle-shaped fuel canister stabilizer, a burner unit, a velvety soft storage bag for the burner unit, a 1.0 liter Neoprene-wrapped FluxRing metal cooking cup with an integrated windscreen, a plastic bottom cover for the cooking cup that serves as a measuring cup, and an insulating drink-through lid. I grabbed an eight-ounce metal isobutane/propane fuel canister off the shelf and put it together.

With outdoor equipment, simple is generally best. Many times, you’ll find yourself setting up equipment in the dark after a fatiguing day under less than ideal weather conditions. It’s basic biology: when the body is hungry and tired, the brain doesn’t get the glycogen it needs to run, and it’s harder for you to think and do basic tasks like assemble a camp stove. Add a bit of stress, like dealing with a hypothermia victim, and time can be an important factor. The faster you can get hot liquids into a patient, the quicker you can treat their symptoms and speed their recovery.

As a trained architect, I immediately appreciated the industrial designer who conceived the MiniMo. The design is simple, efficient, and intuitive to assemble. There aren’t any connecting hoses and everything either screws or snaps together. The orange plastic fuel canister stabiliser base is triangular, accepts either 100 gram (3.53 ounce) or 230 gram (8.11 ounce) fuel cans (sold separately). It’s legs hinge outwards to provide a large base to provide stability to the top-heavy cooking cup.

Importantly, the burner unit quickly screws into the fuel canister and rotate-locks into the cooking cup. This locking mechanism prevents the cooking cup from slipping off of the burner unit during use, which can be a real bummer. I’ve had that happen with other stoves over the years and it really sucks to see the food you worked so hard to carry over miles splayed on the forest floor. Additionally, locking the burner to the cup allows you to pick the entire unit up with one hand when lit, which is handy. Extend the cup handles and pop on the lid and you’re ready to fire it up.

Once I understood the stove’s design and components, I was able to set the stove up in less than 12 seconds on my second try and fill and ignite it under 20 seconds. There’s no beating that convenience.

How we tested the Jetboil MiniMo

I couldn’t fire up the stove inside without causing an issue with the store’s employees, so I completed the purchase, took it home, poured in a liter of water, and ignited it in my backyard. The burner has an integrated Piezo electric push-button ignition switch and regulator which allows for incremental heat adjustments and improves stove performance in cold weather. (Many canister stoves struggle at altitude or in cold temperatures as they don’t vaporize the fuel as easily as liquid fuel stoves.) The stove came alive with a satisfying pop and whoosh and I could smell the burnt hairs of my left hand, which always reminds me of fletching arrows at Boy Scout camp. I had a half-liter of water at a full rolling boil just past the two-minute mark as advertised. It can boil a full liter in just over 4 minutes. Both set-up and fire-up were quick and easy to perform, and the stove brought the water from cold tap temperature to 212 Fahrenheit in a snap.

One of the cool things about the MiniMo is that it has a thermal regulator which allows the user to dial the temperature of the stove up or down, which is nice because not all canister stoves have this function. Indeed, many of the Jetboil options are either full blast on or off. This regulator opens up the range of possible uses beyond just rapidly heating water. If you want to get fancy and actually cook in the cup, the MiniMo can support everything from a low simmer to full-on saute. The FluxRing design enables better heat distribution across the bottom of the cup which aids quick boiling, and the integrated windscreen allows for uninterrupted operation.

Compared to other Jetboil models, the MiniMo has a larger, shorter and wider cooking cup that is optimal for cooking food or boiling water for more than one person. (There are smaller options for solo use.) The shorter rim height lowers the utensil angle and makes it easier to eat directly out of the cup. The cup is Neoprene-wrapped and the flip out handles are PVC-wrapped to prevent you from burning your hands and assist in pouring. The rubber lid has a convenient pour spout, a straining area, and a triangular bump out to stow the fuel canister stabilizer base when the legs are retracted. The pour spout allows you to drink out of the cup without burning your lips on heated metal which is greatly appreciated. Lastly, the plastic measuring cup that snaps to the bottom of the cooking cup mates with the lid to allow for additional food compartmentalization and serving options as one person could eat out of the cooking cup and another out of the measuring cup.

One of the things I immediately noticed about the design of the MiniMo was its stackability. The canister base folds up and snaps into the rubber lid, and the burner, once placed in its protective bag, fits inside the cooking cup. If you turn the burner sideways, you can fit a 100-gram fuel can inside the cup as well. Alternatively, a 230 gram (8.11 ounce) fuel canister can fit inside the cooking cup but not simultaneously with the burner. The entire system is about the size of a cantaloupe and only weighs 413 grams (14.6 ounces).

The things I like best about the Jetboil MiniMo are the speed at which it boils water, the efficiency of design, the ease of assembly, the versatility provided by the regulator, and the fuel efficiency at 12 liters per 100 grams of gas. While the MiniMo is heavier than Jetboil’s other 1-liter backpacking stove, the Flash, by 44 grams, I feel the versatility justifies the additional weight. Jetboil offers a Stash model that only weighs 200 grams, but the Stash only boils without a regulator and lacks a rotating locking design that keeps the pot securely attached to the burner unit. It’s a lightweight and versatile stove that is ideal for backpacking, climbing, mountaineering, and kayak camping.

My only complaint about the MiniMo is that the plastic measuring cup broke within a year, and I’m wondering if there are more rugged material options (Lexan, perhaps?) available. At 415 grams (14.6 ounces), there are lighter-weight options available, but few with the MiniMo’s versatility. I haven’t replaced the measuring cup and won’t. Sixteen trips and 618.6 miles into the Appalachian Trail, I haven’t missed it. My wife and I carry exceptionally light titanium mugs for eating out of, so the measuring cup is extraneous in my opinion.

At $149, I feel I get good value out of the Jetboil MiniMo. There are less expensive options available, but few with the versatility and overall performance of the MiniMo.

FAQs about the Jetboil MiniMo

Q. How much does the Jetboil MiniMo cost?

Q. What’s the power of the stove?

Q: What’s the fuel efficiency of the stove?

Q. Is the integrated lighter reliable?

A. I’ve used this stove since 2016 and it has fired up every time on the first try to include cold mornings in the single digits. I do recommend carrying a small Bic lighter just in case though. Redundant fire starting systems are a smart thing in the backcountry – especially on extended trips. Of note, I’ve used the stove from sea level to 4,500 feet, but have not yet tested it at higher altitudes. I’ve read reports that some users experienced trouble starting the stove with the integrated Piezo ignition above 8,000 feet. This may be due to operator error. Mountaineers Conrad Anker, Renan Ozturk, and Jimmy Chin used a Jetboil Sumo stove well above 18,000’ and in cold temperatures when they climbed Meru in 2011.