In January, more than 64,000 firearms enthusiasts, law enforcement officials, and professional warfighters poured into the Sands Expo Center in... 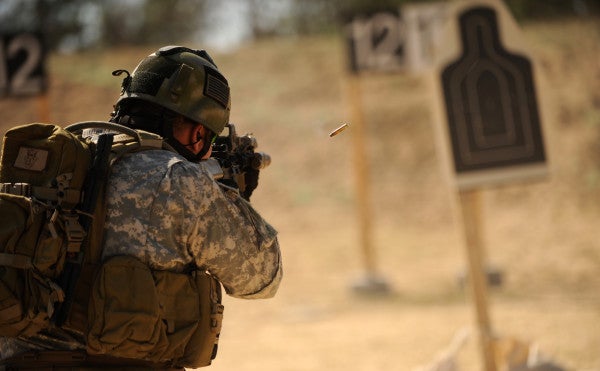 In January, more than 64,000 firearms enthusiasts, law enforcement officials, and professional warfighters poured into the Sands Expo Center in Las Vegas for the 38th annual Shooting, Hunting, and Outdoor Trade Show, or SHOT Show. As the largest trade show for the firearms and tactical industries in the world, SHOT offers a comprehensive glimpse of what the future of war fighting has in store. 2016 saw the event’s biggest turnout so far, with upward of 1,6000 exhibiting companies crowding the showroom floor.

Here we spotlight seven standouts that belong on every professional warfighter’s packing list this year.

Keeping batteries dry and easily accessible while on mission can be a pain the ass. The Cell Vault by Thrym is a simple and smartly designed solution to that problem. Slim and waterproof, the Vault uses less than one MOLLE column and holds the three most common battery types for tactical accessories: AA, AAA, and CR123.

Pressure switches are nothing new, but what’s currently available often comes up short in the durability department. Enter Unit Tactical’s Tactical Augmented Pressure Switch, or TAPS. Encased in a molded polymer body, TAPS features two programmable buttons, as well as removable cables, which are compatible with tactical devices made by different companies. TAPS also features a mechanical backup, so the switches will continue to function if the batteries die.

The future of tactical hearing protection has arrived. While providing ample hearing protection from harmful noise like explosives and gunfire, the electronics inside the EB15 ear plugs by Eytomic Research allow speech and ambient noise to be heard clearly. The smaller and lighter earbuds also mean less bulk and more comfort compared to full-size headsets and earmuffs.

The tactical helmet market has been evolving a lot lately, with many manufacturers now offering advanced designs and more customization. At 2.2 pounds, MTEK USA’s Flux is one of the lightest helmet shells ever. It also features a unique boltless design with no holes drilled into the shell, which makes it one of the safest helmets on the market. And with accessory rails featuring the new Magpul MLOK attachment system, the Flux is fully customizable right out of the box.

With the holographic weapon sight market now wide open since design flaws were revealed in the dominant EOtech line of optics, many shooters are looking for a worthy replacement. Elcan’s Specter Hologram Combat Optic is it. The HCO features a combination one-minute angle dot and 75 MOA circle, which will be familiar to users of other holographic sights. But perhaps the most impressive feature is a 1,200-hour battery life on optimal settings — a significant improvement over previous designs.

Return of the Jungle Boot

The classic jungle boot is making a comeback. Boot makers Altama and Salomon Forces have introduced boots optimized for the wet jungle terrain, with features like drainages holes and and puncture resistant materials. As tactical companies look to America’s defense pivot to the Pacific, we can expect jungle-optimized gear to become much more prevalent in the industry.

American firearms company Lewis Machine & Tool has revealed its MARS-L line of AR-15 pattern rifles, featuring a unique lower and upper receiver designed to accommodate fully ambidextrous controls, including a right side bolt release and a fenced-in mag release on the left. While ambidextrous AR-15s are not new, this design will be one of the first to enter wide service with a foreign military. The New Zealand Defense Force has selected the MARS-L to replace the variant of the Steyr AUG currently in service.