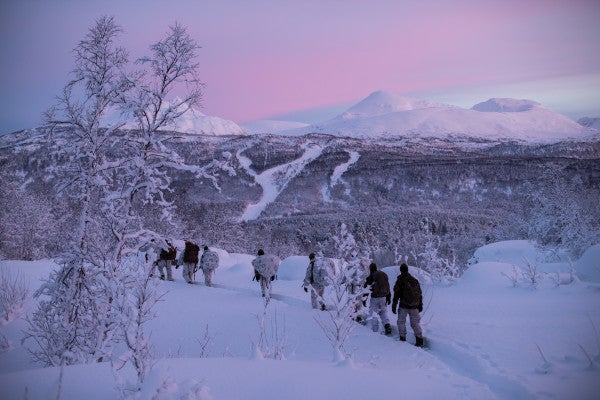 If you look at this photograph taken by Marine Cpl. Ashley McLaughlin long enough, you might find your eyes shuffling around the “happy little” snow, trees, and mountains.

Though it seems like a painting from Bob Ross — the former airman-turned famous painter with an afro who never makes mistakes (just “happy little accidents”) — the photo shows U.S. Marines and Norwegian Army soldiers conducting cold weather training in Setermoen, Norway in Jan. 2019.

It's also downright gorgeous and majestic.

So perhaps it's no surprise that McLaughlin got first place for the shot in the News Photo category of the Corps' Visual Information and Excellence in Communication awards, which were announced last week.

McLaughlin serves among many other talented colleagues, as dozens of Marines were similarly recognized as the best-of-the-best in graphic design, photography, video, and print for 2019.

For example, Sgt. Adam Dublinske scored first in the feature photo category for this downward-facing shot of Sgt. Chad Martinell, a reconnaissance Marine on the 11th Marine Expeditionary Unit, as he climbed a ladder up the side of the USS Harpers Ferry while conducting ship search and seizure operations.

The photo was taken in the eastern Pacific Ocean in Jan. 2019.

Dublinske and other public affairs Marines also shot and edited a video called The Pride of the Pacific, a visually-stunning 13-minute film highlighting the the 2019 deployment of the 11th MEU.

It won first place in the long-form production video category.

Meanwhile, the photo series category demonstrated how pictures, as the adage goes, are worth a thousand words. Cpl. Dalton Swanbeck (also of the 11th MEU) put together a spread of eight photos that featured grunts from 3rd Battalion, 5th Marine regiment setting up a forward refueling point for helicopters during training in California in Feb. 2019. Swanbeck took first place.

And Lance Cpl. William Chockey took second place for his series called “The Stables,” in which he went behind the scenes at the Marines' mountain warfare training center in Bridgeport, California. Besides handling cold weather and mountaineering training for Marines, MWTC also teaches special operations troops how to ride, load, and maintain horses and mules while deployed in austere environments.

You can see the full gallery of winners here.