The Air Force is out early with its Christmas list: It wants 74 new squadrons and possibly tens of thousands... 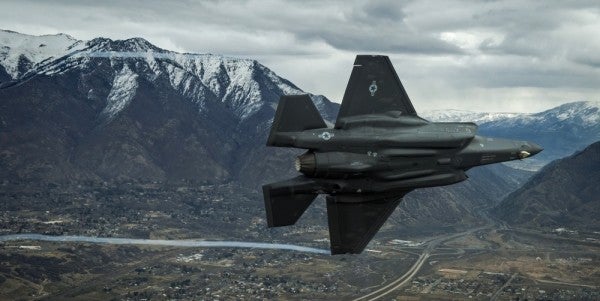 The Air Force is out early with its Christmas list: It wants 74 new squadrons and possibly tens of thousands more airmen by 2030. Meanwhile, Space Force is estimated to cost $13 billion over the next five years, Defense One first reported on Monday.

But if Democrats win control of the House in the upcoming midterm elections, Congress could turn off the spigot of defense spending.

Your friend and humble Pentagon correspondent asked Air Force leadership directly if the United States can afford both an expanded Air Force and an independent Space Force given the costs involved.

“In March, we were asked: ‘What do you need to execute the defense strategy,” Air Force Secretary Heather Wilson said at a media roundtable at the Air Force Association’s annual conference in National Harbor, Maryland. “We should know the answer to that question. We’re not naïve about the financial constraints within which we make decisions. But we also should know what is required from the perspective of those who plan and develop military forces to execute that strategy.”

So far, the Air Force cannot say how much the new units and personnel might cost. Todd Harrison, with the Center for Strategic and International Studies, estimates the extra squadrons will cost $13 billion for operations and maintenance and another $5 billion annually for personnel. The service’s plan to expand will also cut into money that could go into buying modern aircraft, such as the F-35 Joint Strike Fighter and B-21 Raider, he said.

Republicans in Congress are taking a “wait and see” approach to the Air Force’s proposal to expand and the costs of standing up Space Force as the sixth military branch. Sen. James Inhofe, who recently became chairman of the Senate Armed Services Committee, did not address those issues directly but talked about the need to repair damage to the military caused by years of budget cuts.

“Digging out of the readiness hole will be a long process, and preparing for future challenges will require tough choices about resources,” Inhofe, a Republican from Oklahoma, told T&P; in a statement. “As the committee looks toward the FY20 authorization process, we will need to balance priorities like aircraft maintenance and the pilot shortage with questions about how we plan to organize for emerging threats in space. In the coming months, we look forward to hearing from both civilian and military leaders, as well as outside experts, about how we can strike the right balance while ensuring Congress adequately funds our military to meet the challenges we face.”

However, Rep. Adam Smith, who could become chairman of the House Armed Services Committee if the Democrats take the House, sounded skeptical of the Air Force’s plans to get bigger.

“It’s reasonable that the Air Force is doing studies about its future, but they are only concepts and at some point the Air Force will have to deal with budgetary realities as well,” Smith, a Democrat from Washington, told Task & Purpose in an email.

When asked about Smith’s comments on Tuesday, Wilson said the Air Force has an obligation to tell the country what it will take to implement the National Defense Strategy. The extra squadrons will be needed to defeat the threats the United States will face starting in 2025.

“That should be what the country wants their leadership of the Air Force to do – to show them what is required,” Wilson said. “Then there is a conversation of choices that are made about what America can afford.”

Separately, Wilson sent a Sept. 14 memo to Deputy Defense Secretary Patrick Shanahan, in which she estimated that Space Force would cost $3 billion in its first year and $10 billion over the course of the next four years. On Tuesday, Wilson called those figures “conservative. Again, Smith did not show enthusiasm about opening Congress’ wallet.

“This is an initial estimate, but it suggests just how costly President Trump’s plan for a separate ‘Space Force’ would be,” he told T&P.; “That is a major reason why I am opposed to his request.”

Smith has long telegraphed to the Pentagon that the Democrats would cut defense spending if they took power. In April, he warned Defense Secretary James Mattis that the Pentagon needed to plan “for a lean future.”

“We are looking at an over $1 trillion deficit this year,” Smith said at an April 12 hearing. “We just cut taxes by over $2 trillion; increased spending by somewhere in the neighborhood of $500 billion in the face of a now nearly $22 trillion debt. Going forward in the next decade … understanding our fiscal restraints and dealing with them is going to be a critically important part of making sure that our military is ready to do what it can do. We do need to get the budget under control.”

While no one can predict what the voters will do until the day of the election, if there is a “Blue Wave” this November, plans for a bigger Air Force and an independent Space Force could be sacrificed on the altar of fiscal responsibility.