There's a difference between saying "yeah, we'd love to hire veterans" and you know, actively doing that. 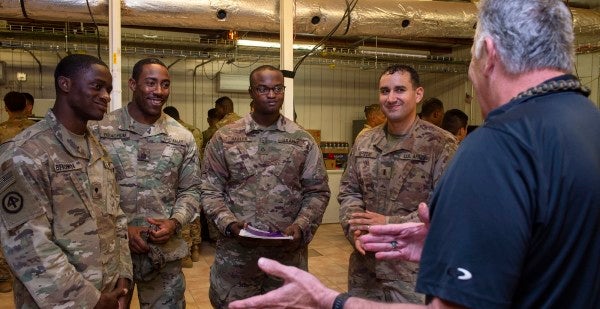 A new report from the U.S. Chamber of Commerce and MetLife indicates that a lot of small businesses may want to hire veterans, but only one in 10 have actively done so.

Task & Purpose was provided a copy of the Small Business Index for the third quarter of 2019, ahead of the report's official release on Sept. 10, so we figured we'd take a moment to break down the key findings and answer some pertinent questions: Why do small businesses want to hire veterans; who's deliberately doing it; and what's standing in everyone else's way?

Based on a survey of 1,000 small business owners, an overwhelming majority (roughly 80%) of small businesses say it would be good for business to hire veterans, but fewer than half (46%) reported hiring a veteran, and only 10% have intentionally recruited veterans.

As far as why businesses want to hire veterans, on the whole they're seen as having more positive attributes: Disciplined; Punctual or Timely; Team Player; Loyal; and Hard Working.

“Veterans are proven learners with a passion for teamwork and a commitment to results,” Joe Shamess, the co-founder and owner of the vet-run company Flags of Valor said in a statement provided to Task & Purpose.

So, yes, small business owners are all about hiring vets, but there's a difference between saying you want to hire vets, and actively seeking members of that community out.

However, those numbers inch up when you take a closer look at veteran-run companies:

While the Index doesn't say why companies aren't actively hiring veterans, it does suggest there's a lack of exposure between non-veteran business owners and the community they're trying to recruit out of.

“Beyond donating to veteran causes and celebrating Veteran's Day, few small businesses report participating in other veteran-related activities or catering to the needs of veteran employees,” notes the report.

The Small Business Index results showed that 88% of all small businesses — vet-run or otherwise — agree that there should be a more formal program in place to help prioritize the hiring of veterans.

While the smallest of small businesses tend to struggle when it comes to hiring veterans, those on the bigger end, seem to making some headway:

Finally, if you are a vet looking for a new gig at a small company, according to the report you'll have a slightly better chance in the South where 51% of small businesses have hired veterans, and in at small manufacturing companies, where 63% have done so.