How The Private Sector Can Get On Board With Hiring Veterans

Over the last few years, the Obama administration has pushed hard to ensure that veterans receive preferential treatment in the... 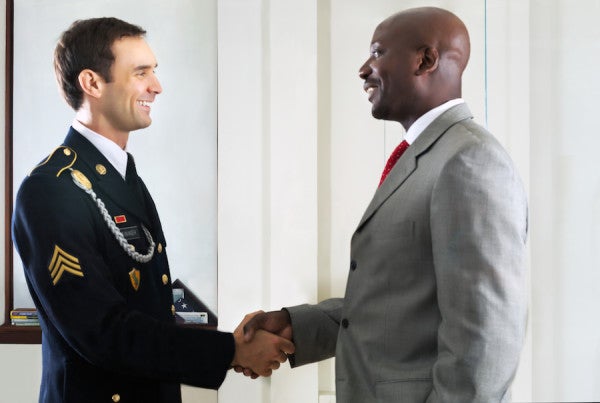 Over the last few years, the Obama administration has pushed hard to ensure that veterans receive preferential treatment in the hiring for federal jobs. This policy is meant to recognize the often-inherent disadvantage veterans have competing for civilian jobs after they leave military service. For post-9/11 veterans, their civilian counterparts were moving up the corporate ladder or completing college when they were undertaking multiple combat deployments.

According to a recent Washington Post article, “veterans who meet certain criteria related to where, when and how long they served and whether they were injured go to the head of the line when they are considered for civil service jobs. Troops with combat injuries or those disabled during their service get higher preference.”

Unfortunately, a similar effort to prioritize the hiring of veterans has not been as widely spread across the private sector. At the end of 2013, according to the Bureau of Labor Statistics, the unemployment rate for veterans in 2013 was 9% compared with an overall unemployment rate of 7.2%. This is a troubling trend.

Historically, veterans have had difficulty finding employment due to the difficulty employers often have in understanding how military experiences translate into comparable civilian skillsets. While this issue still remains relevant, evidence suggests that it is being eclipsed by other concerns that are perpetuated by ill-informed stigmas and an ever-growing civilian-military divide. For instance, extensive media coverage of veterans with post-traumatic stress who commit crimes may create an inherent albeit unintentional bias among some civilian employers. As a result, some employers are more likely to view all veterans as suffering from some form of depression or mental illness and are less likely to consider them as viable candidates. The image of an American veteran has come to symbolize a PTSD-ridden individual damaged by years of combat just as much as it symbolizes the all-American hero who fought bravely for his country.

One way to improve private-sector hiring of service members is to recruit more veterans into the private sector hiring process. The involvement of veterans in the hiring process of private companies will serve as an important bridge between veterans seeking employment and those private companies looking to hire veterans. Doing so will help ensure that someone with an understanding of the military experience can translate the skillsets and abilities of potential hires into civilian qualifications. A veteran advocate within the private sector can also prevent unintentional misunderstandings or misconceptions about a veteran’s experience and help the veteran successfully transition to a new working environment and function within a corporate culture. Veteran hiring advocates within human resources departments of private companies will serve as a mirror to what essentially already exists in the public sector, an institutionalized understanding of the military experience within the hiring organization.

Ultimately, employment for veterans in civilian jobs outside the civil service will only begin to improve when employers recognize the implicit value of military experience and the skillsets that veterans can bring to the table. Private sector companies need to make a concerted effort to employ veterans by using other veterans in the hiring process and drawing upon the experiences and methods of the federal government. Both veterans and the private sector will ultimately benefit from increasing veteran employment and by ensuring that the unique skillsets and experiences veterans offer can be fully integrated and captured to support the private sector’s needs. The first step is to bring veterans onboard who can institutionalize the process and serve as a bridge between the private sector and the vast pool of qualified veterans transitioning to civilian employment.