For eight years, a Marine named Baddy personally protected the president, sniffing meticulously for bombs on 25 domestic and international... 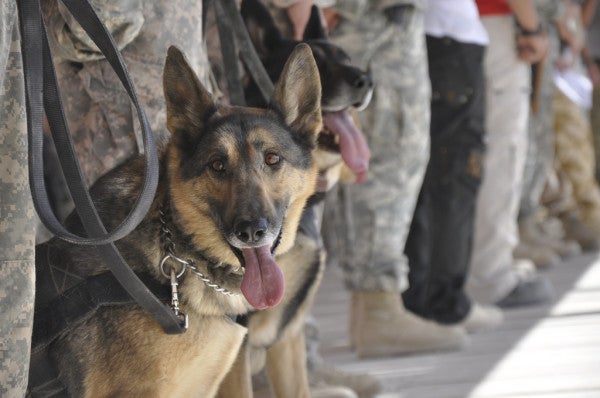 Baddy, who happened to be a Belgian Malinois canine, served with the Marine Corps HMX-1 canine squadron. His handler for much of his service was Sgt. Charlsie Hoffman, who adopted Baddy as soon as he was retired from his duties with the Marines.

“Baddy was my fellow Marine right by my side that said, ‘I will work hard for you and I will die for you if necessary,’” Hoffman told Yahoo News’ Andrew Romano, who wrote in detail about her and Baddy’s tragic story.

When he was still young and strong, the military offered Baddy the best available veterinary care to stretch out the length of his service as much as possible. But that stopped the moment of Baddy’s retirement.

Before 2000, government military working dogs like Baddy were simply euthanized upon retirement. But that year Congress passed a resolution to facilitate the adoption of retired canines by former handlers and other individuals. Still, the military would do nothing to help transport Baddy from Quantico, Virginia, to Hoffman’s home in Los Angeles, nor would it contribute a dime to help treat Baddy’s hip dysplasia, which the canine Marine had developed while still in the service.

It was the same story in August 2014, when Hoffman received the news that Baddy had prostate cancer. She raised $12,000 to pay for special therapy through helpful individuals responding to her GoFundMe crowdfunding webpage. Again, she received no support from the military that had drafted and trained Baddy to serve.

But the therapy didn’t work, as the cancer spread to Baddy’s lungs and bones. Hoffman had to find more money to extend the life of her best friend and former brother in arms. Putting herself through the University of Southern California while working part time and living with her parents, Hoffman’s veterinarian bills eventually surpassed $35,000. Then she lost count.

Along the way, Hoffman had to grapple with how much money to pour into treatments for each complication, like a swollen prostate that prevented Baddy from urinating and a severely swollen leg that would probably keep recurring. Hoffman weighed whether to pay herself for surgeries, successive rounds of conventional chemotherapy, and unconventional chemotherapy.

Each time, Hoffman chose not to leave Baddy behind. Then one morning in late February 2015, Baddy began pacing endlessly around the house, barely noticing when Hoffman worriedly called his name. The pain from blood clots had become excruciating, and nothing more could be done.

After Baddy’s Feb. 25 death, Hoffman called the Department of Veterans Affairs for help with a funeral memorial service honoring Baddy, just like any other veteran. The staff member hung up the phone as soon as Hoffman mentioned Baddy was a dog.

In 2012, Democratic Sen. Richard Blumenthal and Republican Rep. Walter Jones drafted legislation that would have required the government to transport retired military dogs for adoption, establish a system of veterinary care for them, and reclassify them as true members of the armed services rather than “equipment.”

The military completed the reclassification on its own by March 2015, but the other provisions only became law after the language was altered from specifying that the military “shall” provide care and transportation, to instead state that it “may” provide it, reported Yahoo News. This effectively made it optional, not required.

“They changed the language so they wouldn’t have to do anything,” Ron Aiello, a Vietnam veteran running the U.S. War Dogs Association, told Yahoo News. “Everybody was saying, ‘Oh, it’s so wonderful! It passed! These dogs are finally going to be taken care of!’ So I told people to read the bill, and I was right. It’s been a couple of years now. Nothing is happening.”

For now, the best bet for retired military working dogs to receive proper care is with the private Red Bank Veterinary Hospital in New Jersey, which since November 2014 has provided free specialized veterinary care to canines who served in the military.

But Hoffman still believes it’s the military’s responsibility not to leave anyone behind, human or canine. “They work for you so selflessly,” Hoffman told Yahoo News. “The amount they do for this country is humbling. And they do it all without asking for anything in return. You want to go the extra mile for them because you know they would do the same for you.”

Learn more about Baddy’s story in the video below.