What The Army-Navy Matchup Could Mean For College Football

Oh how far we have come. The Army-Navy football game has always been a source of pride and patriotism for... 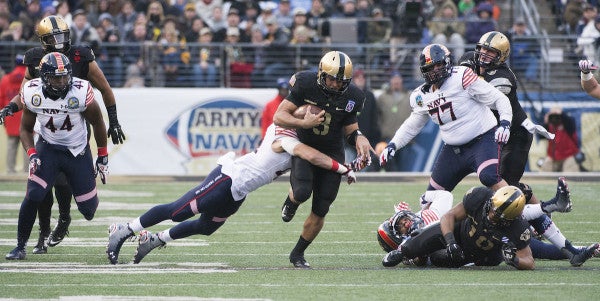 Oh how far we have come. The Army-Navy football game has always been a source of pride and patriotism for those both inside and outside of the military. But starting this year, “America’s Game”— the only true amatuer college football game — has a chance to make a real impact on the college football world.

In May, Army, Navy and CBS announced their refusal to change the date of the annual Army-Navy game slated for Dec. 12 this year to adjust to the final College Football Playoff rankings and with good reason. It is not for the ratings or money that come with being the only college football game on that particular Saturday. It is to showcase what is truly unique about service academy football.

This game is normally planned a week after the traditional end to the college football season and after the final rankings are put out by the College Football Playoff selection committee. Due to the Navy joining the American Athletic Conference and its previous decade-long success as a Division I independent school, there is a real possibility that the Army-Navy game result could affect already established matchups in a New Years Six Bowl, as well as several second-tier matchups affiliated with the Group of Five conferences.

Presuming the Navy is the highest-ranked team from the Group of Five conferences, it would eligible for an automatic berth in a New Years Six access bowl (most likely Fiesta or Peach). The chance of this scenario happening is not out of the question. The Navy enters this season coming off an eight-win campaign, a strong showing against NCAA football champion Ohio State and a Poinsettia Bowl victory against San Diego State. SB Nation currently has Navy second in its pre-season power rankings for the AAC. A return of star quarterback Keenan Reynolds and a favorable regular season schedule put the Navy Midshipmen in a good position prior to the start of the season.

If the Navy was to be that highest-ranked team with an access bowl spot and then subsequently lose to Army in “America’s Game” after the end of the regular season, that loss could drop Navy down to a lower bowl and replace it with the number two team from the Group of Five. This could start a chain reaction. A complete reshuffling of bowl matchups, promotions, and travel considerations would possibly take place for those teams in the Group of Five as well — all within one week. The first AAC bowl matchup — the AutoNation Cure Bowl — is slated for Dec. 19.

Athletic directors from Army and Navy have been adamant about keeping the contest a stand-alone game and with good reason. Last year’s game drew its highest rating in 15 years with a 4.5 rating and 10 share in Nielsen-rated markets. Each rating point accounts for slightly more than one million homes viewing the game. This was better than last year’s PAC-12 championship matchup between Oregon and Arizona and the Big Ten title game between Ohio State and Wisconsin.

“We have no intention of moving it. None,” Navy athletics director Chet Gladchuk told USA TODAY Sports last month. “It would show that we've realigned our priorities in a way that doesn't complement our mission. We can't do it. It's something that's that special.”

As a premier college football matchup, the Army-Navy game is the last bastion of student athletic football as we once knew it. Last year’s game produced the first NFL draftee in more than six years for either Army or Navy with Joe Cardona being selected in the fifth round by the New England Patriots. Before that, you have to look to the Army’s Caleb Campbell, who was taken 218th overall in the 2008 NFL Draft by the Detroit Lions. To put that into perspective, the 2014 NCAA title game between Ohio State and Oregon had seven total picks taken in the NFL draft between the two teams.

It is no secret that the future of these service academy kids will unlikely be playing for any NFL team. More importantly, the seniors from each team know that when the final whistle blows, they will swap uniforms and become professional officers in a variety of roles, many of them dangerous.

The simple fact is America needs to see this game by itself with no other college football distractions. There will be plenty of opportunities to watch superior college athletes, who will some day go on to play in super bowls and command millions of dollars in lucrative contracts with the NFL. However, to watch individuals in a stand-alone game, who then go on to serve their country in our armed forces, is a contract America should honor.

But, allow your mind to wander a bit. Let’s hope there is a point in the near future, possibly this year, where these two teams are more than a feel good marquee matchup. A chance for either Army or Navy to play spoiler with the current college football bowl system would be grand. It would elevate the game beyond its current status and provide the game with the football respect it deserves.

The College Football Playoff management committee has certainly taken notice of this timing conundrum by addressing it at Collegiate Commissioners Association meetings. The fact that they are concerned about the impact an Army-Navy game outcome could have on the 2015 college football bowl picture is a victory in and of itself.

Wouldn’t it be special for a group of true student athletes to wreak havoc on a system that has, for all intents and purposes, left them behind?