Though for-profit institutions have been preying on soldiers since World War II, the enactment of the 1998 90-10 rule has... 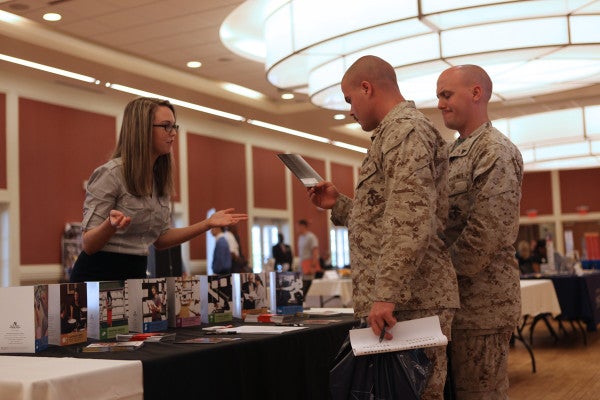 Though for-profit institutions have been preying on soldiers since World War II, the enactment of the 1998 90-10 rule has given rise to more deceitful tactics that hone in on veterans’ G.I. Bill money.

The rule, which states that no for-profit institution can receive more than 90% of its revenue from Title IV student aid from the federal government, has a loophole by way of the G.I. Bill, which is not counted as federal student aid. Although the Department of Veterans Affairs implements its own 85-15 ratio rule, which requires no more than 85% of a for-profit program's students receive VA funding, this does not affect the 90-10 rule — making G.I. Bill students highly desirable for admissions.

However, as the Department of Education seeks to close the 90-10 loophole, and for-profits come under greater scrutiny for predatory recruiting practices, these institutions are seeking new ways to bypass greater regulation.

A recent study by senior fellow Robert Shireman of The Century Foundation found that some for-profit colleges are changing their statuses from for-profit to nonprofit in order avoid restrictions on receiving student aid. According to Shireman, these “covert for-profits,” as he refers to them, can exist because:

… while the Department of Education relies on the Internal Revenue Service’s judgment of which institutions are and which are not valid nonprofits,the IRS rests its determination on the declarations and self-regulation by the trustees of these nonprofits, based mostly on an honor system. As with other taxpayers, the IRS relies on the honesty of the individuals and corporations that file tax returns, an honesty that is tested only in case of an audit, which often takes place years afterward.

Through four case studies based on hundreds of pages of documents obtained from government agencies, the report reveals a “dangerous regulatory blind spot” with the two federal agencies each wrongly assuming that the other is monitoring the integrity of the nonprofit claims of these colleges.

For the covert for-profit, the switch from for-profit is not typically motivated by benevolence, but rather a desire to obtain the protections afforded to nonprofit institutions. From a business standpoint, the financial benefit of being a nonprofit is exponential. The status allows for numerous state and federal tax exemptions, in addition to the elimination of the 90-10 rule.

The concern with for-profit colleges making this switch is that “at every turn in the educational enterprise, the owner’s profit motive can distort the educational mission, making owner-operated schools more aggressive and singly-focused on maximizing return, even to the point of self-deception,” wrote Shireman.

To attract veterans, a number of these education programs boast high post-graduate employment numbers, which often turn out to be falsified, much like in the case of Corinthian College. The school is currently embroiled in a lawsuit for misrepresenting job placement rates to students and investors, advertising programs it did not offer, and subjecting students to unlawful debt collection practices. In the summer of 2014, Corinthian, which had more than 70,000 students across 100 campuses, was ordered by the Department of Education to shut down 12 of their campuses and sell off the others. Many veterans in attendance were left with nowhere to go, no transferrable credits, and no money for school.

University of Phoenix is facing similar issues. In early October 2015, the Department of Defense suspended University of Phoenix from its tuition assistance programs. The decision comes after an investigation by Reveal, which suggested that the institution is in violation of an executive order meant to prevent for-profit colleges from gaining preferential access to the military.

Currently, there is no mechanism in place to restore G.I. Bill funding to veterans whose colleges have been shut down as a result of illegal financial activities. As a result, the VA is currently working to provide veterans with adequate information on all schools that take tuition in the form of the G.I. Bill prior to enrollment, to prevent them from being scammed.

“There are too many for-profits that are more interested in getting the dollars, picking up the revenue … adding to their bottom line,” Delaware Sen. Tom Carper told the Atlantic earlier this year. Carper is a sponsor of the Military and Veterans Education Protection Act, a bill aimed at closing the loophole. “They’re more interested in that than they’re interested in making sure a GI—man or woman—gets the kind of education that will allow them to provide for themselves and their families for the rest of their lives.”

As schools like Herzing University, Remington College, and Everglades College — all case studies within Shireman’s report — make the transition to nonprofit, the IRS is in seemingly uncharted territory as far as preventing financial abuses. As nonprofits, these schools have far more money to use as they see fit. This leaves veterans unprotected from predatory recruiting practices.

When these institutions start the transition to nonprofit status, it is often necessary to use nonprofit tax savings to pay down the loans taken to buy out shareholders. But Everglades College, for example, was loaned a significant amount of money from Arthur Keiser’s family, which previously owned a number of the schools being purchased and turned to nonprofits — meaning they still maintain a great amount of personal stake, and potentially influence, in the college's interests.

Additionally, true nonprofits are meant to avoid all conflict of financial interest through the hiring of an unpaid, thereby impartial, board of trustees. As a number of these college have made the switch, the impartiality of administrators has come into question by the Department of Education.

The standards of the programs have also been debated, with a number of accredited colleges refusing to take credits from these institutions in the event of a student transferring. In 2013, Herzing University was forced to settle with Minnesota's attorney general after opening a medical assistant training program that was not accredited.

In the report, Shireman wrote, “There is a real danger of this approach creeping into traditional higher education and undermining quality.”

Shireman noted that there are two real differences between for-profit and nonprofit tax laws: The first is that donations to nonprofits can be deducted from a donor’s income, reducing income tax. The other is that net income isn’t subject to corporate income taxes.

The potential financial liabilities from the tax returns of the schools mentioned within his report could run into the hundreds of millions of dollars. Covert for-profit institutions are in the business of misleading consumers, evading taxes, and undermining regulations that apply to all other nonprofit colleges seeking to provide education to students instead of profits to company owners.

“If the colleges are not truly the non-profit entities they claim to be, then many of these funds are being claimed inappropriately,” wrote Shireman.