On March 24, a group of student veterans spent the morning on Reddit answering questions about a new program to... 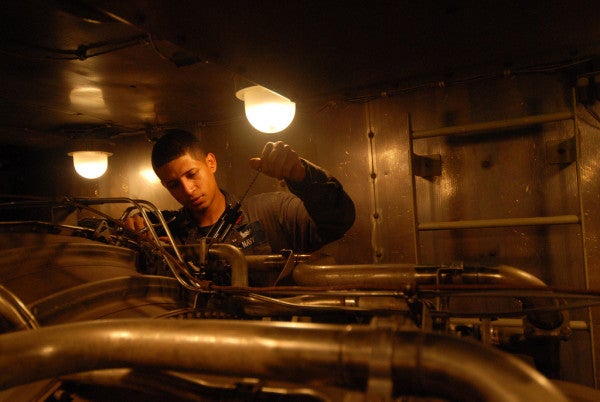 On March 24, a group of student veterans spent the morning on Reddit answering questions about a new program to help vets find desirable, lucrative careers. This group is part of the West Coast pilot called Troops to Technology Workforce Development Initiative, or T3WDI, a new type of veteran employment initiative, which launched last year based off a Department of Energy program at Oak Ridge National Lab.

The veterans engaged in the Reddit post are all individuals who separated from the military within the past two years. They are like most other veterans who recently left the service — not sure what they want to do, and wary of false promises made by businesses, colleges, and even the Department of Veterans Affairs. Despite the lack of clarity, everyone in the group — who all entered the pilot through Las Positas College in Northern California — managed to get internships working at Lawrence Livermore, one of the most advanced technology labs in the country. And now they are receiving the training and education they need to get hired after graduation, if not before.

Until recently, Paul Cordner was a machinist mate in the Navy. Now he is interning for Lawrence Livermore National Lab and working toward a two-year mechanical engineering technology degree at Las Positas College in California. Via email he described the program’s benefits in a way that should resonate with many vets: “Before [T3WDI], I had never really had the chance to see what a career I am working toward was like first hand.”

The main difference is that T3WDI isn’t about any one job or one veteran. Brynt Parmeter, the retired Army colonel who orchestrates the pilot program, thinks about things differently. “It’s a two-fold problem,” he said in an email. “Reduce the skills gap in advanced manufacturing, and reduce un- and under-employment among transitioning service members.” Now he travels around the country talking to companies and schools about how they can work together to build bridges between a military and commercial skill set.

The T3WDI approach focuses on skills, not veterans. Former service members just happen to be the best people for the job. “It’s about improving the capacity of the Advanced Manufacturing and Technology sectors by increasing the number of people who have the skills required to fill their current and future vacancies,” says Parmeter. The program works with any collection of educational groups and businesses that offer a clear pathway to a job.

This is a completely new way of increasing employment. Everything about T3WDI and its West Coast pilot shows how it diverges from business as usual. The Reddit AMA is a great example. Instead of exaggerated claims by the program about how you can always get a job, the actual veterans in the program answered personal questions about the culture, the day-to-day work and responsibilities, as well as the struggles they face trying to balance school, work, and family. It’s an unfiltered look into education as a veteran.

In response to a question about culture, former Marine Corps Cpl. Fernando Campos said, “eople definitely look up to you to do the right thing, professionally. So as veterans, fitting in, is not a problem.” The program is intended to help people get the information they really need from other folks just a few years ahead of them dealing with the same stuff.

T3WDI is not a solution to every aspect of veterans employment. It is, however, a good attempt at a new way to get vets stable, high-paying jobs. There are currently 600,000 unfilled advanced manufacturing jobs across the country, and more on the way. Veterans will be a big part of the return of manufacturing to America, and manufacturing will be a big source of good jobs for veterans.

Editor’s Note: The author works with Brynt Parmeter, who is quoted in this article.