“I always say gunships are a team sport; you really can’t do something like this without a great team." 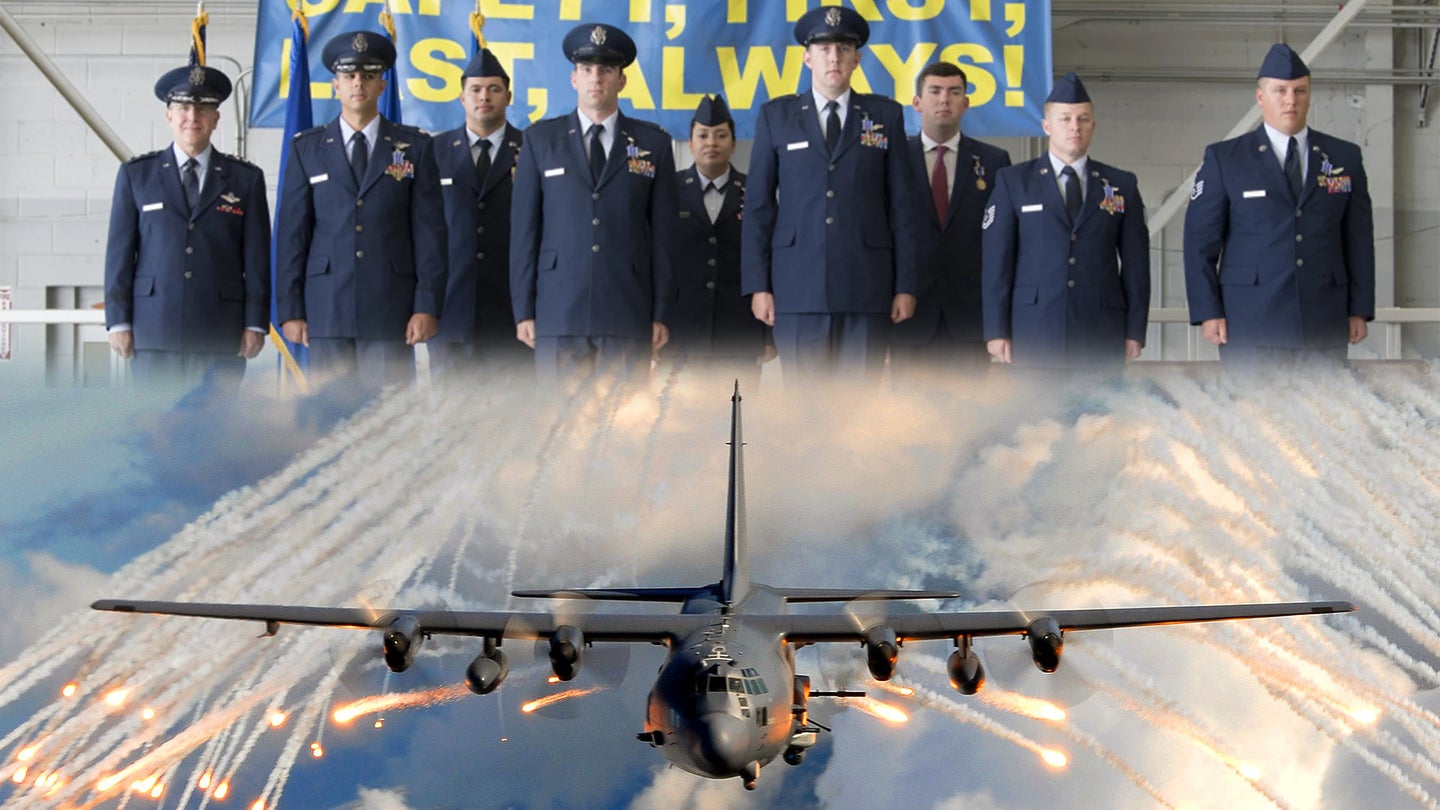 The crew of Shadow 71 pose after receiving the Distinguished Flying Cross and an Air Medal during a ceremony at Hurlburt Field, Florida, June 22, 2021. Shadow 71 was an AC-130J Ghostrider flight that directly supported American and Afghan forces during an ambush and subsequent firefight, repeatedly engaging multiple enemy positions while simultaneously coordinating a multitude of other support functions in the air. (Air Force photo by Tech. Sgt. Victor J. Caputo)
SHARE

An Air Force AC-130 gunship crew was recognized at Hurlburt Field, Florida on Tuesday for saving the lives of 88 American and Afghan Special Forces members during a fierce battle in Afghanistan in September 2019.

Five of the crew members aboard the AC-130J Ghostrider flight “Shadow 71” received the Distinguished Flying Cross, and four others received Air Medals, according to a press release from the 1st Special Operations Wing.

The 1st Special Operations Wing declined to share more specifics of the operation, such as the objective of the mission, the number of enemy fighters involved and the number of casualties, citing operational security.

“I always say gunships are a team sport; you really can’t do something like this without a great team,” said Air Force Lt. Col. Christopher McCall, Shadow 71’s aircraft commander. The commander is also usually the pilot of the aircraft. “Shadow 71 has talent from front-to-back.”

The eighth highest award for bravery, the DFC is awarded to any officer or enlisted person of the U.S. military for heroism or extraordinary achievement while participating in aerial flight. The Air Medal is the ninth-highest and is awarded to U.S. military and civilian personnel for single acts of heroism or meritorious achievements while participating in aerial flight.

Shadow 71 is the latest in a 54-year line of AC-130 aircrews who provided clutch air support for U.S. and allied troops under fire. Last spring, an AC-130U crew was awarded two Distinguished Flying Crosses and 12 Air Medals for phenomenal gunnery above a firefight against ISIS fighters in Afghanistan in April 2019.

“I would have to reach for examples like Normandy, Iwo Jima or Hamburger Hill to appropriately convey the degree to which the enemy were prepared and ready for our assault,” wrote one airman about the battle the AC-130U crew helped win that day.

The latest AC-130 model, the AC-130J Ghostrider, has a particularly intense reputation for death and destruction. Air Force officials have called it “the ultimate battle plane,” and a “bomb truck with guns on it.”

The Ghostrider’s 30mm cannon in particular is “almost like a sniper rifle. … It’s that precise, it can pretty much hit first shot, first kill,” then-1st SOW commander Col. Tom Palenske told Millitary.com back in 2017, adding that the aircraft is “going to be the most lethal, with the most loiter time, probably the most requested weapons system from ground forces in the history of warfare.”

Palenske was right, and the Ghostrider was soon working overtime in Afghanistan. “Every night, the AC-130J is flying,” Col. Terence Taylor told Stars & Stripes in 2019. “The people they are supporting are requesting them every single night.”

The Ghostrider could get even deadlier with the addition of a directed energy weapon (that means a laser) that Air Force Special Operations Command said would be ready sometime in fiscal year 2022, which is coming up fast.

But as the crew of Shadow 71 proved, their training and conventional weapons suite are already doing more than enough to back up American ground troops when they need it.

You can read the full DFC citation below:

Watch next: The Final AC-130U Spooky Returns From Combat Deployment