When Colleen Cekovsky’s husband, Christopher, deployed to Afghanistan in 2014, she was left alone looking after two young children, until... 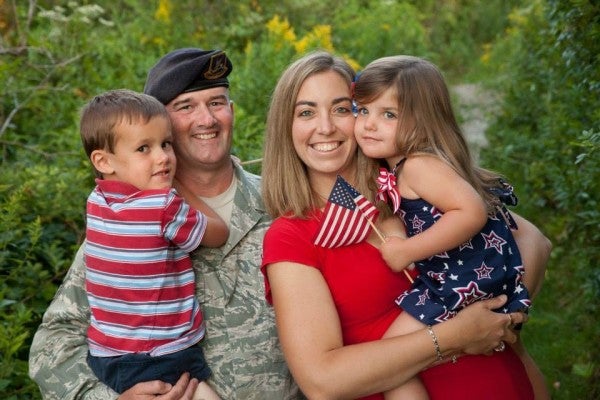 When Colleen Cekovsky’s husband, Christopher, deployed to Afghanistan in 2014, she was left alone looking after two young children, until her neighbor, Joy Goulette, stepped up to help. Goulette, who has three small children of her own, set up a network of contacts in their neighborhood in Westfield, Massachusetts, in which participants took turns writing notes of support and cooking meals.

Cekovsky began calling her neighbors her “dinner angels,” because they consistently brought meals in the evening, the two women explained in an interview with Task & Purpose.

Related: The 5 rules for balancing your military career and family life »

“I really didn’t think it was a big deal, I was very surprised this all happened. I also didn’t know how much she appreciated it,” said Goulette, who did this once before when a friend of hers deployed to Afghanistan in the early 2000s. “For me it was a very small thing I did for her, but it really did mean a lot to her because she felt included while her husband was gone, and I’m glad that I did it.”

Cekovsky’s husband serves in the Army National Guard, and because they’re not stationed on or near a large military base, there’s not a lot of immediate support or understanding for what a family goes through during a deployment, she explained, which made the notes and meals all the more meaningful.

A photo of some of the notes Colleen Cekovsky received from her neighbors.Courtesy photo.

“This was our first deployment to a war zone. My husband had other shorter trips to non-war zone areas,” said Cekovsky, who explained that Chris was deployed to Bagram Airfield in Afghanistan from October 2014 to April 2015.

“The beginning was difficult in that the light at the end of tunnel seemed so far away,” said Cekovsky. “The notes that came with the meals, that’s what kept me going. It gave me something to look forward to every week.”

Fifteen people participated regularly, and quite a few had never met Cekovsky before, she explained.

“Here were people who knew nothing about me, nothing about my family, yet they were willing to take the time and make a meal for me and write out a very nice card offering their support and their encouragement.”