What’s more terrifying — or maybe awe-inspiring — than a ferocious canine charging across the battlefield, hot on a terrorist’s... 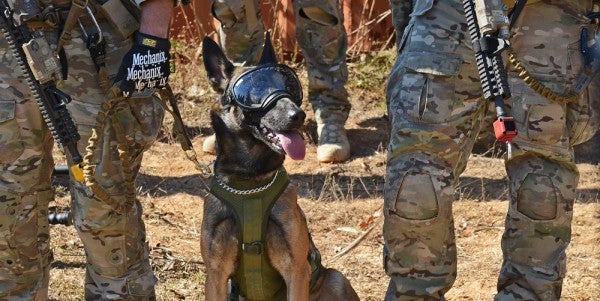 What’s more terrifying — or maybe awe-inspiring — than a ferocious canine charging across the battlefield, hot on a terrorist’s heels? A canine that can execute a high altitude jump, and then proceed to maul America’s enemies, naturally.

Called “Jump The Dog,” the competition invites inventors to design oxygen masks for dogs to wear while conducting high-altitude, high-opening (HAHO) jumps with special operations units, according to Military.com.

While some military working dogs do jump out of perfectly good airplanes strapped to the chests of their special operations handlers, canines are for the most part precluded from performing high altitude jumps. The specially designed masks would fix that.

They must come in small, medium and large sizes and demonstrate a true seal — which might be tough, given a dog’s fur. According to the rules, the competitors will be testing the masks on this “Canine Model” — though “giant plush doggy” is probably a more accurate title.

The competing teams are free to use new hardware, software, and electronics in their prototypes, but the product must be public and free under an open-source license, according to the competition’s rules.

It’s unclear if anyone’s considered how a dog will react to jumping from altitudes as high as 35,000 feet, but it’s a safe guess that they’ll be a lot more useful on the ground than other animals. When’s the last time you heard someone gearing up for a mission say “Man, I wish we had a cat”?