U.S. Special Operations Command is still in the market for a lightweight, compact personal defense weapon chambered in .300 Blackout 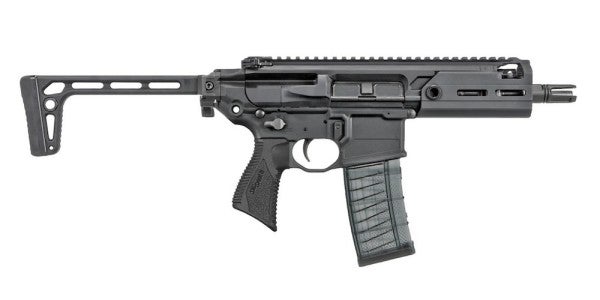 It's been more than three years since U.S. Special Operations Command signaled its intent to pick up some new personal defense weapons, and so far SOCOM is still on the market for a fresh PDW.

Despite procuring a handful of Sig Sauer MCX 'Rattler' PDWs in February 2018 for testing and evaluation, SOCOM is still in the market for a lightweight, compact system chambered in .300 Blackout.

While SOCOM initially issued a request for information for a new PDW that back in March 2017, the command issued another announcement in November 2019 in search of “a highly concealable .300 Blackout upper receiver group (URG) and buttstock kit solution for the M4A1 platform,” according to Defense Media Network.

The PDW solution “should consist of .300 BLK URG, 7.62 suppressor, folding buttstock, 5.56 training solution, reconfigurable ergonomic components, and 300 BLK magazines,” according to the solicitation.

According to budget documents, SOCOM planned on procuring 250 new PDWs in fiscal year 2020.

While SOCOM spokesman Hawkins declined to elaborate on what additional PDW systems the command was currently evaluating, the latest issue of Special Operations Outlook spotlighted the MDX family of weapons from Maxim Defense — described as “born from the SOCOM PDW solicitation” — as a potential solution.

Indeed, Maxim Defense used the most recent SHOT Show in Las Vegas, Nevada, back in January to highlight the MDX line. From Defense Media Network:

One of the companies working toward a PDW solution to match that requirement is Maxim Defense, which used the SHOT Show timing to highlight its full family of MDX weapon systems – consisting of the MDX:505/PDX (5.5-inch barrel), the MDX:508 (8.5-inch barrel), and the MDX:510 (10.3-inch barrel) – with company literature noting, “The entire MDX line in 5.56 NATO is sponsored by The Maneuver Center of Excellence and part of Army Expeditionary Warrior Experiment [AEWE] in 2020. Maxim is also attending Force-on-Force experiments with the U.S. Army, U.K. Army, and the Australian Army January through March 2020.”

Additionally, it stated that the PDX, “Born from the SOCOM PDW solicitation,” was now available in .300 BLK.

SOCOM declined to elaborate whether the MDX series from Maxim Defense was formally under evaluation by military officials. But as SOCOM's Rattler contract in 2018 noted, the command isn't ruling out any contenders: “any responsible source who believes to be capable of meeting the requirement may submit a capability statement, proposal, or quotation, which shall be considered by the agency.”

Translation: If you've got a PDW rattling around in that brain of yours, you'd better dust off those designs.