On Dec. 5, Tibor Rubin, a Hungarian-born Holocaust survivor and Medal of Honor recipient, died of natural causes at age... 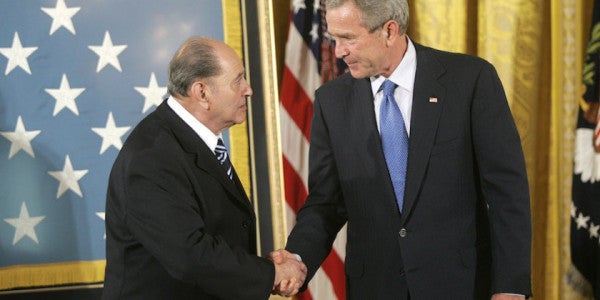 On Dec. 5, Tibor Rubin, a Hungarian-born Holocaust survivor and Medal of Honor recipient, died of natural causes at age 86. Rubin survived 14 months in Mauthausen concentration camp until it was liberated by U.S. forces in May 1945, reports the Los Angeles Times.

After vowing to make it to America and join the Army as a way to repay his liberators, Rubin had the chance in 1948 when he enlisted and was sent to Korea as a rifleman. In July 1950, Rubin was asked to stay behind to hold a hill as his company withdrew, and at dawn, Korean regulars attacked. Rubin repelled the attack, single handedly holding his ground for 24 hours. He later said, “I didn't have too much time to get scared, so I went crazy.”

After being wounded that November, Rubin was captured and sent to a Chinese-run prison camp where the hard-learned lessons of Mauthausen helped save not just his life, but the lives of his fellow soldiers. After rejecting his captors’ offers to send him back to Hungary, Rubin slipped out of the camp, broke into a storehouse, and returned with food for his fellow prisoners, many of whom were starving. Rubin remained a prisoner of war for 30 months.

Rubin left the Army with two Purple Heart medals, though he was recommended for awards for bravery. He was finally awarded the Medal of Honor on Sept. 23, 2005.

Upon awarding Rubin the Medal Honor, President George W. Bush called him “one of the greatest Jewish soldiers America has ever known.”