Afghanistan left a ‘moral injury’ on American veterans. Here’s how they can start healing

The cost of the moral injury from Afghanistan has yet to be fully realized. Here's how America can stop abandoning its partners. 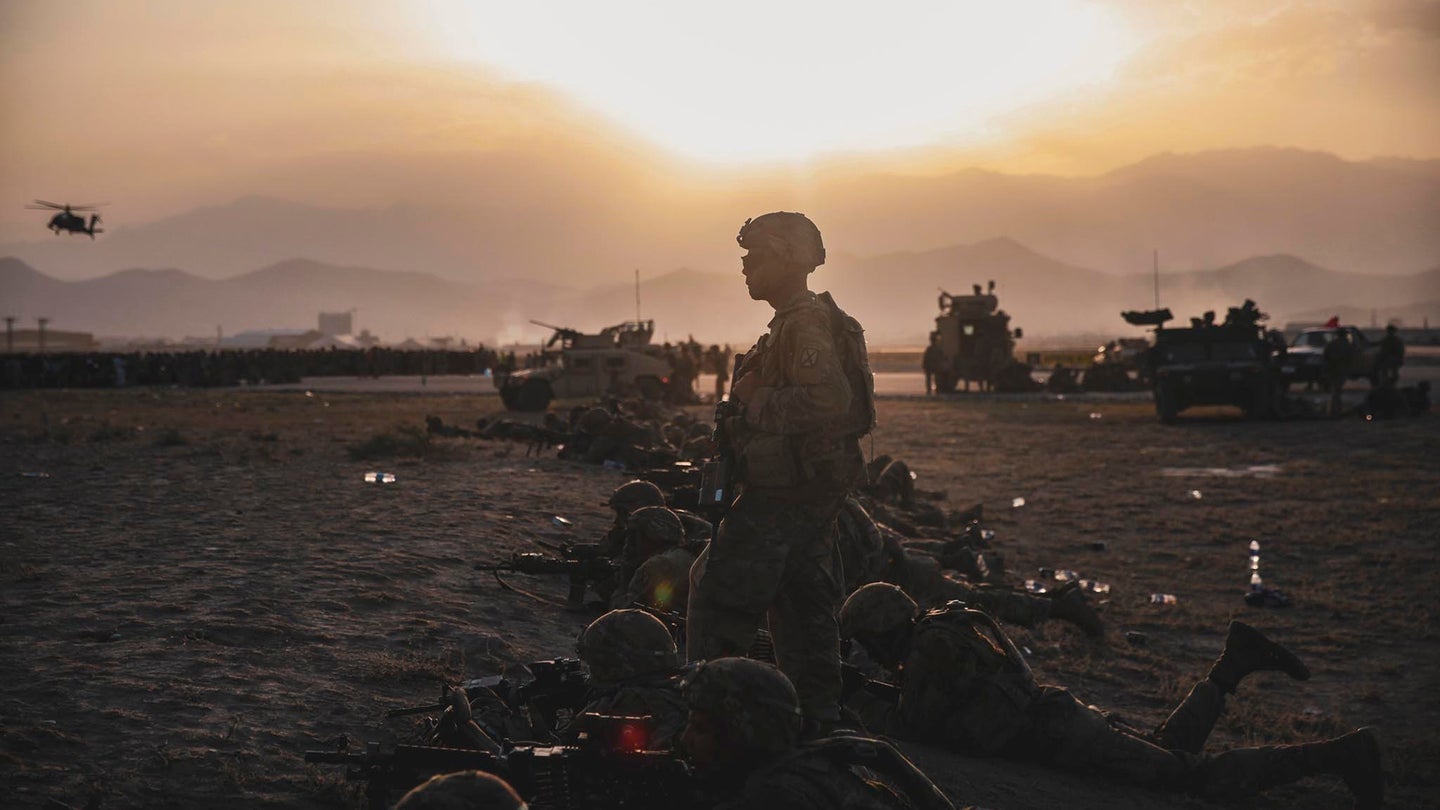 I was fixated on the footage coming out of Kabul on August 15, 2021, when my phone rang. Jane Horton lost her husband, Chris, in Afghanistan in 2011. She’s one of the most resilient women I know, someone who turned her grief into an active campaign of support for Afghanistan veterans and our mission there. But she was sobbing as she watched what I was watching: “My husband, those that died, and all of you guys don’t deserve to be tied to this bullshit. You were there to serve your country and give your lives if asked. I feel like my heart has been ripped out all over again.”

When I turned down battalion command and retired from the Army in 2013, disgusted with the wrong-headed strategy in Afghanistan and the careerism of senior military leaders that allowed it, I thought I had put Afghanistan behind me. But suddenly it was all I could think about.

We were cutting and running, leaving behind so many Afghans we had promised to stand beside. This betrayal was felt throughout the service community. More than three million Americans served in the Global War on Terror. They and their families shed blood, sweat, and tears. “What was it all for?” so many were wondering.

The motto of the Special Forces is De Oppresso Liber, which means “to free the oppressed.” But as Green Beret Master Sgt. Geoff Dardia told me, “Rather than liberate the oppressed, I feel like we oppressed the liberated.”

Nearly a year after the abandonment of Afghanistan, many veterans are still trying to honor America’s promise to the Afghan people, trying to help their partners survive the brutal Taliban takeover. They have depleted their checking accounts and cashed out their 401Ks. Ben Owen, a veteran helping Afghans find a safe passage with his non-profit Flanders Fields said to me, “Even my kids’ college funds have been wiped out trying to help with this mess.”

That may sound extreme to many people. But what choice do these veterans have? Some promises are written in blood.

American service members are trained to stand by their partners until properly relieved of their post. One year after the collapse in Kabul, there doesn’t appear to be any relief in sight for these volunteers. The U.S. government has done little, intent on turning the page on the Afghan withdrawal in order to save political face. Our politicians, diplomats, and senior military leaders don’t grasp the magnitude of the burden they’ve cast upon these veterans.

Imagine a friend or family member contacting you, begging you to help them as predators actively hunt them down. As the keeper of this lifeline, deep down you recognize there is nothing you can do to stop it from happening today, tomorrow, next month or next year. Yet, outwardly, your moral responsibility is to keep them hopeful and—to the best of your ability—alive.

The cost of this moral injury has yet to be fully realized. Some former members of the U.S. Special Operations Forces have left the military or retired in disgust. Many others on active duty are determined to leave uniformed service sooner than planned. I fear we will also lose many more veterans to suicide. Recent estimates suggest that 30,177 active duty and veterans of the post-9/11 wars have died of suicide—compared to 7,000 killed in 20 years of combat—with the record numbers coming in the last several years. With 73 percent of the 775,000 Afghan war veterans saying they feel betrayed by the withdrawal, will this moral injury drive even more to acts of despair?

One general officer, who was deeply involved in the Afghan evacuation and responsible for leading one of the nation’s premier combat units, told me in an interview in early 2022 that he was surprised to hear of the Afghan abandonment affecting so many. “I thought they would have gotten over this by now,” he said.

Well, they haven’t, and the longer our general officers/flag officers (GOFOS) go without acknowledging this injury to those who served so faithfully, the worse things will get. We need only to look at how moral injury decimated an entire generation of Vietnam War veterans to know how this ends.

From the Vietnamese Montagnards to the Afghan Commandos, America is developing a nasty reputation for the abandonment of its allies. According to Brookings, most Americans believe that the United States has a moral obligation to resettle our Afghan allies within our borders. More than three-quarters of Afghan war veterans say this would improve their mental health and sense of wellbeing.

Throughout my post-abandonment interviews with dozens of special operations active duty personnel and veterans, one question kept coming up: “Where were the generals?” NCOs and junior officers wanted to know why the flag officers didn’t put their rank on the table and formally call out the flawed political actions in the public domain. They could have warned how abandoning our allies would impact national security or of the dire threat to veterans’ mental health. Instead, their silence was deafening. Sure, some worked behind the scenes to help Afghans to great effect, but we look to our GOFOs to be public facing, not operating in the shadows at a time when this kind of immoral act is in play. Silence in this type of wholesale abandonment doesn’t make you a “quiet professional,” it makes you complicit.

And finally, many in our veteran ranks are less interested in what Generals McKenzie, Petraeus, Clarke and others think should have happened in Afghanistan, as the abandonment fades into the distant horizon. That ship sailed a year ago. It was lower-ranking veterans, far more junior, who made that case, and they did so with almost no GOFO support publicly. To do so now is tone deaf to the level of veteran betrayal, and adds more fuel to an already raging fire of moral injury. Your sergeants, junior officers, and veterans are more interested in immediate help in dealing with the current problem of Afghan abandonment and veteran moral injury.

This needs to start at the top. President Joe Biden promised on the campaign trail two years ago to honor the “sacred obligation” to our veterans. Yet, in the latest State of the Union, he didn’t mention the Afghanistan withdrawal, the efforts to save our allies, or the 20 years of sacrifice involved. Here are some immediate actions our elected and military leaders can take:

In a sense, the goal here — or rather, one of the biggest ones — needs to be to stop the long cycle of partner abandonment and to ensure that it never happens again by the U.S. The intent is not to point fingers or play the blame game. We all made mistakes in this long war. But, only when our warriors see a sincere effort to rectify this systemic failure of partner abandonment, can we start to move toward moral recovery.

Dressed in his characteristic flannel shirt and ball cap, a former Green Beret icon and member of Task Force Pineapple named “Donny” sat in my office staring into his coffee. The Afghan evacuation was just a distant memory. In the final hours of Operation Pineapple Express on August 26, Donny had guided hundreds of Afghan Commandos and their families to safe passage before the ISIS-K suicide bomb detonated.

None of that mattered now though. It is the ones left behind who are haunting Donny. One of the Afghan Special Operators he’d been moving from safe house to safe house had just run out of time in Kabul. The Taliban had found him, tortured him, and killed him. Tears streamed down Donny’s cheeks. “If I had known back then, what I know now,” his voice trailing off. Silence as he stared at me, his chin quivering. “If I’d known how we would treat our Afghan Partners, I would never have walked into the recruiter’s office after 9-11.”

The current approach of leaders putting their heads in the sand, like nothing is happening is unacceptable. Failure to directly address this vast moral injury could cause our veterans to simply check out and disconnect from civil society. It’s happening already. In these times of low trust and division, this loss of the veteran population as our national moral compass is something we can ill afford.

Lt. Col. Scott Mann is a retired Green Beret with over twenty-two years of Army and Special Operations experience around the world. He has deployed to Ecuador, Colombia, Peru, Iraq, and Afghanistan. He is the CEO of Rooftop Leadership and the founder of a 501c3 committed to helping veterans tell their stories in transition. Scott’s upcoming book on the Afghanistan withdrawal, Operation Pineapple Express, will be released by Simon and Schuster on August 30, 2022.

Correction: An earlier version of this piece incorrectly said Flanders Field CEO Ben Owen is a combat veteran; he was Army infantry, but was injured before deploying and did not see combat. We regret the error.