Called Millennium Challenge 2002, the idea was simple: to develop and implement training and doctrine that could be changed quickly to utilize developing technology and adapt to varying enemy tactics. The Cold War tactics the U.S. military trained on for decades were out the window and a new war was on the horizon. 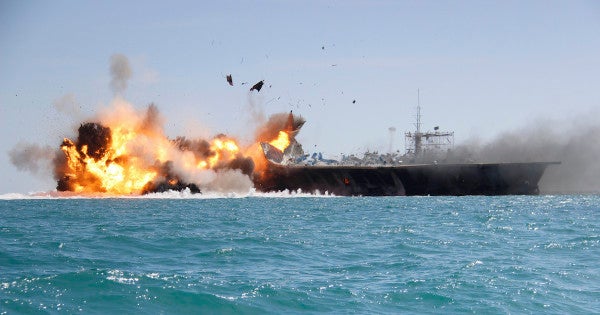 Back in 2002, nestled in that year and a half when Afghanistan was in full swing yet Iraq was still a twinkle in Donald Rumsfeld's eye, the U.S. military held its most ambitious war game in recent memory.

Called Millennium Challenge 2002, the idea was simple: to develop and implement training and doctrine that could be changed quickly to utilize developing technology and adapt to varying enemy tactics. The Cold War tactics the U.S. military trained on for decades were out the window and a new war was on the horizon.

It was a total disaster.

Lt. Gen. B. B. Bell led the American Forces Blue Team against his enemy Red Team, conveniently left unnamed but bearing a striking resemblance to Iraqi and Iranian defense forces. The Reds were led by retired Marine Lt. Gen. Paul Van Riper, known at the time as a controversial yet effective Oppositional Forces (OPFOR) commander. Van Riper knew his side suffered a technological disadvantage and adopted asymmetrical strategies to use against the American forces — with devastating results.

The Blue Team delivered an eight-point ultimatum to the Red Team, intended to culminate in their complete and unconditional surrender. Van Riper, who knew his fictionalized country would never surrender in the face of American aggression, opted for a different response.

Using low tech communications such as light signals and motorcycle messengers to relay his plans to his forces, Van Riper's OPFOR eventually unleashed chaos by confusing the ultra-sophisticated Aegis radar system of the looming U.S. Navy fleet with a barrage of missiles. Once they were blinded, speedboats laden with explosives on kamikaze runs came barreling in and took out nineteen ships.

The attack took ten minutes and resulted in 20,000 casualties for the Blue Team. It was a humiliating episode: the United States, the foremost military power on the planet, had just suffered a humiliating defeat at the hands of a smaller and lesser-equipped force. The Blue Team hadn't just lost — it had lost miserably.

When you spend a quarter of a billion on a war game designed to prepare you for the real thing, you can't lose. Literally, your forces cannot lose unless you want to stand in front of a sitting defense secretary and explain why a fleet of American naval ships were destroyed in less time than a pizza delivery.

Then again, that's not always a bad thing: It's good to fail completely and utterly in training because you can't snap your fingers and refloat a destroyer in real life. Indeed, the MC2002 leadership replayed the scenario and dispensed with the speedboats, not because Blue Team 'knew' the Reds were coming, but because they treated suicide bombing by boat as a credible threat and were appropriately prepared. This was the whole point of the war game in the first place; this is why you train.

But the most embarrassing element of MC2002 wasn't the Blue Team's failure, but the questionable constraints on Red Team.

The overseers of MC2002 told Van Riper he wasn't allowed to shoot down the V-22 Osprey tiltrotor aircraft or C-130s incoming with ground forces; he was told their offensive weapons needed to be out in the open to be sighted and destroyed by offensive forces, and they were directed to not use chemical warfare against paratroopers dropping in. In essence, Red Team was not allowed to do anything which would cause the Blues to lose so embarrassingly again.

For the cynic (or the veteran who has spent a lot of time around U.S. military bureaucracy), it is easy to roll your eyes and agree that of course the U.S. military would cheat to win in their own fake war. However, in war games, military planners must establish constraints due to unavoidable obstacles like time, environment, or even just regular shipping traffic. After all, you aren't conducting real combat operations, and no one wants to delay a cargo ship laden with only the finest of imported spatulas.

Consider that chemical weapons (the whole excuse for an Iraq invasion in the first place) were removed entirely from the equation. General William Kernan, commander at the time of the U.S. Joint Forces Command, explained in a 2002 interview that chemical weapons were banned during airborne operations because his forces a 36 hour window to do those operations. If there was a threat of chemical weapons being used on a drop zone, friendly forces would find somewhere else to land, but for the sake of conducting war games within the timetable and areas given, restrictions must be made or you end up wasting the time of the 82nd Airborne who came all this way to jump out of an airplane.

“If you'd have put, say, persistent chemicals on the area in which you were going to employ those forces, we would have waited,” Keenan said. “We didn't have the luxury of waiting.”

On top of the constraints placed upon the Red Team, the Blue Team in MC2002 had a few of their own questionable tricks up their sleeves. The Allied forces were given access to experimental technology that was either untested or still in development (which we all know always worked the first time with no problems.) They even had access to technology that still doesn't exist now in 2019, like effective airborne laser weapons. This is the equivalent of booting up a video game and then immediately smashing the cheat codes.

The question here isn't if the deck was stacked against the OPFOR. Even JFCOM, in their after-action review, acknowledged that free play was constrained to deliver a win for the good guys in the end. The question, as one should ask about any large scale military exercise that costs lots of money, is far simpler: did we learn anything?

That depends. Van Riper knew Red Team couldn't compete against the Blue Team's technological advantages, both real and experimental, so he fought as an insurgency. Even with the constraints put on the Red team, Blue Team couldn't complete all their goals while dealing with Van Riper's asymmetric assault though they destroyed much of Red's warfighting capabilities, their regime was preserved and survived in the end.

This is probably the most important takeaway of MC02 that no one talks about: When completely unfettered, Red destroyed a fleet in 20 minutes, but when reigning in the enemy Reds and fighting with a stacked deck, Blue still couldn't complete all their objectives. Red maintains their dictatorship and lives to strengthen, rearm, and build again. You'd think that, after seeing the same thing happen during Operation Desert Storm, that command might pause and reconsider stepping into Iraq, especially when you're training with capabilities that won't be at your disposal or even exist

Seventeen years later, it's difficult to know if MC2002 taught our forces anything in preparation for the invasion of Iraq invasion. We began ground invasion into Iraq using force on force violence, yet the U.S. was completely unprepared for sustaining a force against an insurgency. Even the nation building we attempted was such a disaster, the only ones who came out on top was Iran. MC2002 was meant to prepare U.S. forces for Middle Eastern conflict, yet we went into a war in Iraq in 2003 before any of the lessons learned could be implemented.

The real lesson learned from MC2002 shouldn't be that, when fighting an enemy who can only fight as a decentralized insurgency, we can't win even with a stacked deck; it's that the most advanced theoretical weapons won't neutralize a force sustained by hatred or ideology. If we wanted to learn anything, MC2002 should have been a war game with no war, a war game that starts not with guns or sanctions, but with negotiators. Eighteen years into a war against an insurgency, and we still struggle to learn that lesson