What it was like fighting on Iwo Jima, according to a Marine Medal of Honor recipient

"I could no longer be the person I was prior to the Marine Corps." 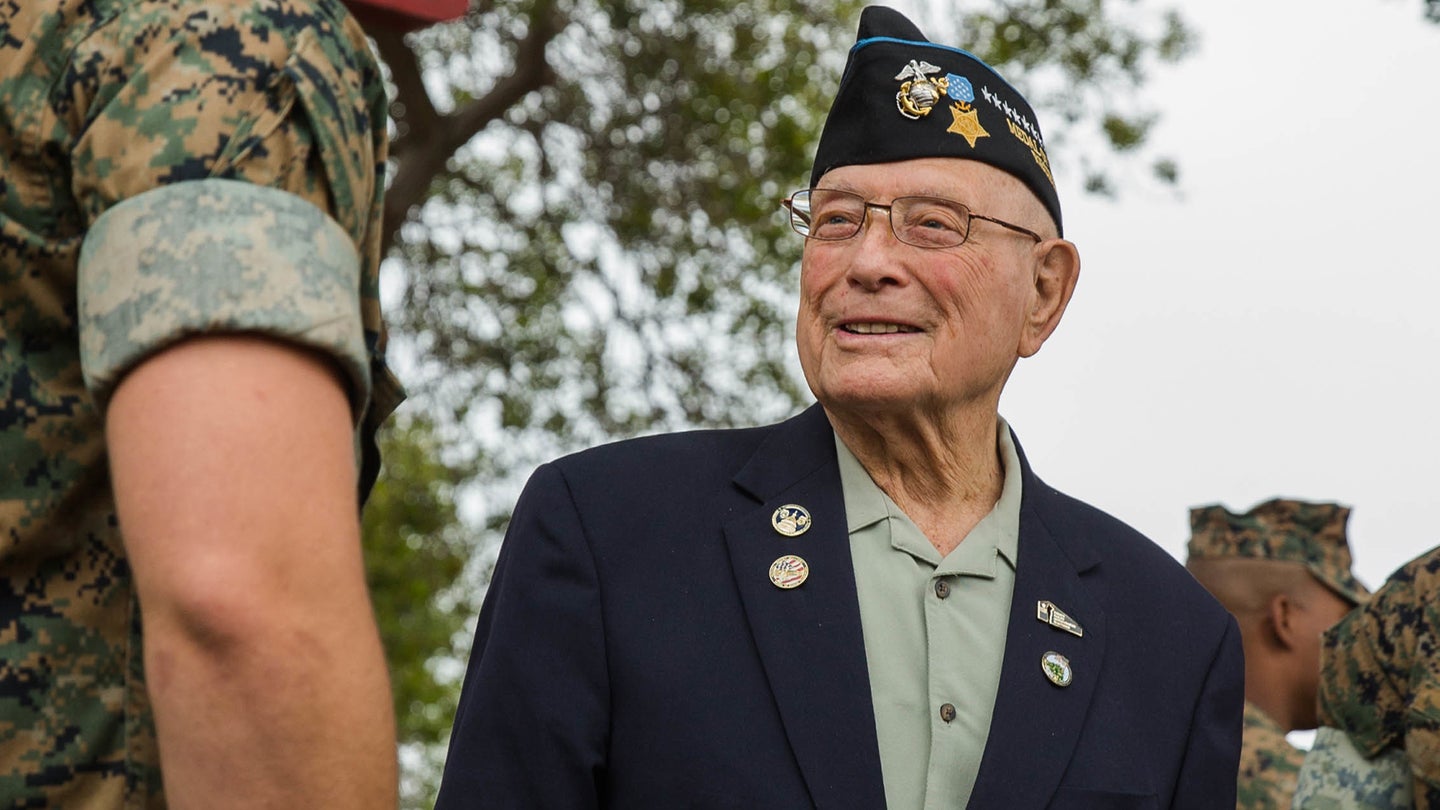 To Hershel “Woody” Williams, the Medal of Honor he wears around his neck does not belong to him. It’s not because he isn’t worthy of it, he undoubtedly is. For Williams, the medal belongs to the men who never made it home.

On Feb. 23, 1945, Williams was a 21-year-old Marine corporal fighting in Battle of Iwo Jima, one of the most brutal and unforgiving battles in American military history. The fighting was horrific, and the events of that day have stayed with Williams for decades.

On the small and heavily fortified volcanic island, Williams repeatedly assaulted enemy positions armed with a flamethrower and demolition charges in order to clear the way for the Marines who remained pinned down under the brutal enemy onslaught.

Over the course of four hours, Williams attacked a system of fortified concrete pillboxes. He fought the enemy at point-blank range when they charged him with bayonets. At one point, he climbed atop a bunker, inserted the nozzle through an air vent and unleashed a burst of flame that killed the occupants. However, he did not do it alone. He is emphatic about this. Two of the four Marines tasked with covering Williams as he assaulted the system of Japanese bunkers gave their lives to ensure he was successful.

He wears the Medal of Honor for them, he says.

Williams was presented the nation’s highest award for battlefield bravery by President Harry S. Truman on Oct. 5, 1945, and in 1969 he retired from the Marine Corps as a chief warrant officer four. These days, the 97-year-old Marine veteran spends his time working with the Hershel Woody Williams Medal of Honor Foundation, a nonprofit group dedicated to erecting monuments in honor of the families of fallen service members.

Williams spoke with Task & Purpose about how his time at war, and the many years spent retelling the story of the Battle of Iwo Jima, have shaped his life; his sense of obligation as a Medal of Honor recipient; and what similarities and differences he sees between his generation and post-9/11 veterans.

Task & Purpose: After the Battle of Iwo Jima and since receiving the Medal of Honor, would it be fair to say that your life changed, probably pretty dramatically, and if so, how?

Hershel “Woody” Williams: It was very difficult for me, as a country boy having been taught all my life you do not kill — that was strictly enforced in my family. That you didn’t kill anything uselessly, whether it was a bird, a chicken, or anything. You just didn’t do it. It was quite an adjustment that I had to make to condition myself, that now I’m going to have to kill other people. That was a terrible adjustment for me.

I had never heard of the Medal of Honor, all the time in my career in the Marine Corps, Medal of Honor was never mentioned. … I had decided it was just a medal, but I realized the day after I received the medal that it would have a tremendous impact on my life.

I watched an interview that you did awhile back for Medal of Honor oral histories, and you talked about that meeting with the commandant, can you tell me what he said?

The one thing that has always stuck with me, the little bit that I do remember was one of the very early things that he said. We went into the office, each individual by themselves. Nobody was in the office of the commandant except you and him. … I didn’t know it it at the time, but A.A. Vandegrift was also a Medal of Honor recipient from Guadalcanal, so he knew more about what was coming my way and what the recipients would face, than the average individual because he’d already been there. … But he said to me: “That medal does not belong to you. It belongs to all of those Marines who did not get to come back home.”

So to me, he was saying that the only reason that I have the medal — that I had been fortunate enough to receive the medal — was because others made the sacrifice that made it possible.

For the last 71 years you’ve chosen to talk about the battle, about your service, and about the medal. What is it like reliving that day? Is it cathartic? Is it challenging? Can you tell me a bit about that experience?

I don’t consider it challenging, I guess. I do consider that the only reason that I’m able to recite my story, of what I did, was because of the help of other Marines. There’s one word in my citation that if I could take out, I would. It has always bugged me that it says in my citation “he went forward alone.” Number one, I was not alone. Number two, if it hadn’t been for the Marines supporting me, shooting at the Japanese in order to keep them from being able to shoot me, and killing some of the Japanese that were shooting at me, I have no assurance that I would be here. So I don’t consider it a challenge … You do what you are trained to do, and you can only do what you do because of that training. If somebody hadn’t train me to do the job that I was ordered to do, there’s no way I could have done it. I could not have done anything alone.

When you tell the story of that day, are you thinking about the Marines that were there with you? Who are you doing it for?

Well, basically not for their benefit. They’re not here. Two Marines gave their life that day, on February the 23rd, 1945, protecting mine. I say almost every time I begin to speak: This medal does not belong to me. I wear it in honor of those Marines who gave their life protecting mine. So I do it if we can say for — I do it for them. Without them I could not have achieved what I did. I don’t do it for me.

Do you feel that there are some things that are true of all wars?

All wars are going to cause grief because the purpose of a war, unfortunately, is to kill the other person. In the process of doing that, on the winning side or the losing side, there are going to be deaths and there’s going to be grief. There’s going to be sorrow. That’s part of war. I have said many times over the years, surely there is somebody in this world that would be smart enough to figure out a way where we can get along without having to kill each other.

We have people who can figure out how to kill each other, but why can’t we have someone smart enough to figure out a way that we can come up with a system that says we can resolve this problem without having to shoot each other. It’s my prayer that that’s going to happen, sometime in the history of America.

I’ve said many times, using the analogy, if I wake up dead some morning in my bed…

That’s a funny, people usually laugh when I say it.

Well if I wake up dead some morning in my bed, I am doing what is natural for me to do. I must die. I have no choice in that, but for an individual to go to war and be willing, not necessarily wanting, but to be willing to put himself in a position that he knows he could be killed for a cause of freedom, is so much different than somebody who dies of a natural death. He’s not doing it for him. He’s doing it totally for somebody else. Often times, I think far too many times, for people that really do not want it and do not appreciate the opportunity that we are attempting to give them.

Now, in your talks and speeches in recent years, have you spoken with or met any Marines who fought in Iraq or Afghanistan? Did you see some similarities or identify with the younger generation of Marines?

I saw some similarities but the principal similarity as far as I’m concerned, I run into this a lot … but I am finding, and this is my own diagnosis, and I could be clear out in left field, but what I’m finding is: The average Afghanistan and Iraq veteran is very proud of the fact that he served his country and he’s proud of the branch of service in which he served. I find that almost 100%, but the thing that I don’t find is any pride of accomplishment. World War II guys, even Korea, and Vietnam those guys felt there was some accomplishment because there was change that resulted from all the sacrifices that were made. World War II was a very proud group of people because we actually won the war. That gave us something we could actually brag about if you want to use that term. But I find in the Afghanistan and Iraq veterans, there is nothing they can actually say they are extremely proud of in the way of accomplishing something that resulted in the better.

You’re a Marine, I’m a Marine, I get the sense that some of the camaraderie, the bonding, the closeness, the loyalty to the Corps, I find that it is slipping in the newer Marines. They’re not joining or becoming a part of Marine units like the Marine Corps League, or the Marine Corps birthday balls or functions where Marines are involved. … We’re losing that.

What is it that you think makes a good Marine?

Related: Ty Carter explains what it’s like to wear the Medal of Honor