We have just one burning question: Why? 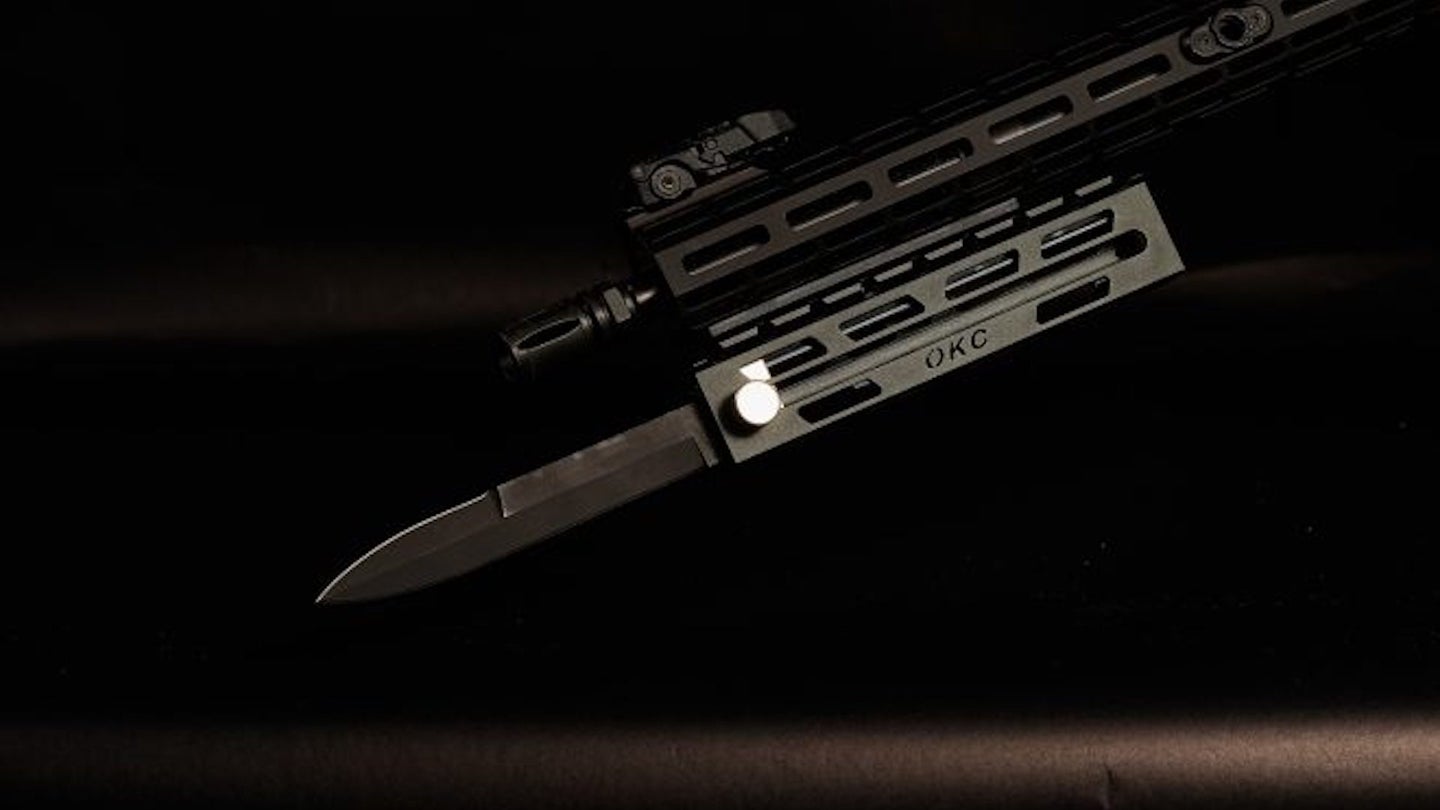 Bayonets have been around ever since some 17th-century trooper in Bayonne, France said to himself, “Hey, what if we turned these muskets into spears that can also shoot bullets?” But even though the most recent bayonet charge in military history was just over a decade ago, the practical use for bayonets is pretty much always in question in a modern warfighting ecosystem defined by drones, precision-guided munitions, and high-tech optics. Military historians even argue that bayonets became largely obsolete with the widespread proliferation of the machine gun during World War I.

Apparently, the folks over at the Ontario Knife Company disagree with that sentiment, since not only are they the primary provider of the Marine Corps’ bayonet, but they also recently revealed, well, this masterpiece: a spring-loaded, out-the-front, single-action, super-steel, bayonet-grind, Picatinny rail-mounted bayonet.

“OKC has been making high-quality bayonets for the U.S. military for decades, and this new retractable bayonet design is unlike anything we’ve ever created before,” said Kenneth Trbovich, president and CEO of the Ontario Knife Company, in a statement surrounding the release of the new bayonet in early July. “With its unique retractable feature, premium materials used, and ability to easily mount to your AR or any Picatinny Rail System, it truly is a multifunctional blade and we’re excited to launch it to the civilian market.”

The idea of a retractable bayonet isn’t necessarily new, with the first U.S. patent for one filed in the early 20th century. Hell, the Chinese Type 56 famously featured an integrated folding spike bayonet that sets it apart from nearly every other Kalashnikov variant. As recently as SHOT Show 2018, Massachusetts-based Paper City Firearms flaunted a 4-pound tubular bayonet:

But the OKC retractable bayonet is something else entirely. Done with carbon steel bayonets that lose their edge from atmospheric factors alone? Well, don’t worry, this thing’s made of S35VN. Don’t have a bayonet lug on your rifle because it’s from that decade between 1994 and 2004 when President Bill Clinton’s assault weapons ban was in effect, or just want to attach your bayonet to a pistol? This thing mounts to any Picatinny-style accessory rail. Don’t feel like carrying a whole knife in a sheath? This thing is a true-blue single-action switchblade. Worried that out-the-front knife actions are notoriously weak and probably aren’t the best for forceful stabbing at the end of your barrel? Two words: Switchblade. Bayonet. This thing apparently solves every problem out there short of world hunger and the series finale of Game of Thrones.

But it still leaves the burning question: Why?

When I first saw the press images that came out regarding the OKC retractable bayonet, my first thought was that it was one of those April Fool’s gags that weapons manufacturers will put out every year, like the Hi-Point Firearms’ YC9 “Yeet Cannon” which still hasn’t come out. So I emailed OKC and was basically like, “Dear Ontario Knife Company, Explain. V/R Matt Sampson” because I was sure this was some sort of joke. It wasn’t: an OKC marketing representative responded that this “is an actual product, but it has not been released yet.”

If you’re one of those people who thinks that the retractable bayonet is a good, practical idea, buckle up, because without ever having met you I’m going to speculate as to what kind of person you are and what kind of products you’d buy.

This bayonet seems like something that came out of the same school of thought that graced the gun community with the Gripknife, the Blunt Force pistol bayonet, or the gift to every immediate action drill that involves smacking the baseplate of your magazine, the Manly Innovations (yes, really) Magazine Base Interchange system, or MBX.

If you just Googled any of those things and thought “hey, that looks like a cool idea,” then maybe this retractable bayonet is for you. Maybe you’re the kind of person who thinks Marcus Fenix of Gear of War was onto something with his fashion choices and in his choice of attachments for his Lancer.

Since I now have such a clear image of the buyer for something like the retractable bayonet, let’s talk about the actual rifle that would be most appropriate for it. It probably looks something like the ridiculous rifle design in the latest Chris Pratt vehicle, The Tomorrow War, where someone decided that the best thing to pair with a 7-inch barrel was an ACOG. The rifle is probably an airsoft replica since I’m going to assume that you’ve either got the good sense or lack of cash to not register an SBR that looks like this abomination and so we’re going to put an orange tip on the barrel. You probably spent all your money on HERA furniture and a drum mag of some sort because you saw the 60-round count of the MA5B Assault Rifle in Halo and were like “damn, I want that,” so here’s your Magpul D60. Because you spent all your money on drum mags and mall ninja furniture, even Holosun optics are off the table, so NCStar and Sightmark are it for now. But hey, at least you got to slap a sick-ass Punisher skull on your receiver because nothing says “Punisher skulls are still cool” like a switchblade bayonet.

Voila. As you can see, graphic design is my passion.

All of this said, I think the part about this whole retractable bayonet that really surprises me is that it came from the Ontario Knife Company of all places. Usually OKC is a sober, conservative, almost boring knife manufacturer that makes serious tool knives. This is something that I’d expect from SOG, or maybe Cold Steel. But as we saw a few weeks ago, other typically serious knife manufacturers are now doing things just for fun like the so-called Space Force Ka-Bar, and it’s not something that I can hate in concept.

I don’t know how much this thing is going to cost, but honestly, the retractable bayonet is something that’s so bonkers, so stupid, so “bro, why did you do that,” that if you want to buy one just for the fun of it, I’d say go ahead. We have but one request: if you end up actually shelling out good money for this thing, send us a note and let us know how it handles.