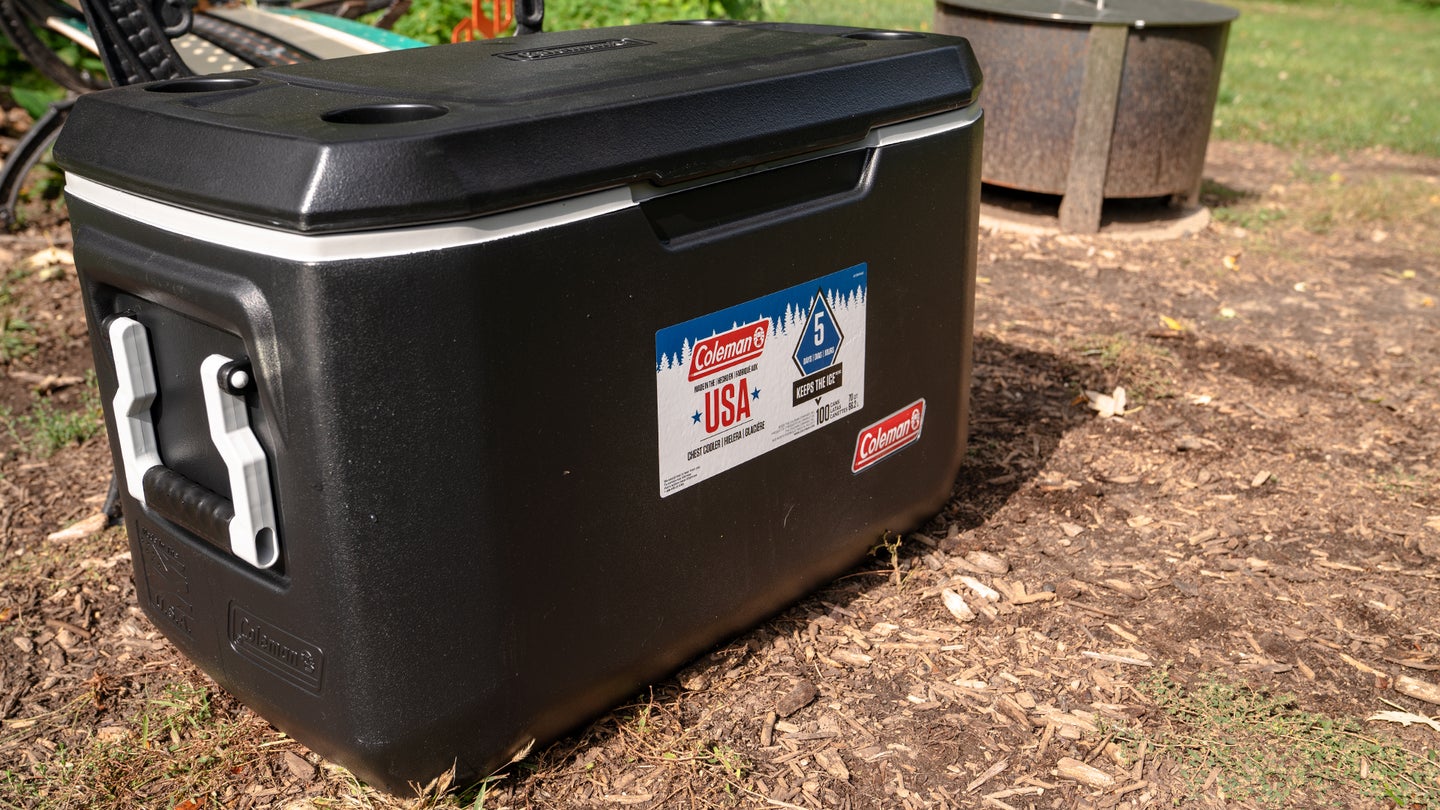 Football season is upon us again. I wait all year to hear the intoxicating sound of pads making contact, read hilarious student section signs, and rip the last patches of hair from my head when my team insists on running a delayed handoff up the damn middle on third and long for the fifth series in a row (or maybe that’s just an Oklahoma State thing). At least I can count on my consolation beer being cold. Thank goodness for that.

Buying a cooler used to be a pretty straightforward affair; all you had to do was choose your size and find a color you liked. Designer-brand coolers have changed that. Companies like Yeti, Kong, and Rtic will happily charge $300 for a 70-liter cooler, so it can be hard to know what’s right for you. As long as Coleman offers the Xtreme 5 at $69.99 on sale, I have to think there are better places for your money (namely, the contents of the cooler) if your budget looks like mine. That price puts the Xtreme 5 in between the premium brands and the generic coolers that make me question their build quality.

Is the Coleman Xtreme 5 cooler a high-value target or a cost-cutting alternative? I loaded one up with a few bags of ice and a selection of Wisconsin’s finest brews to find out.

The Xtreme 5 looks like the size I’d bring to a tailgate or weekend camping trip. The 70-liter capacity is listed as being able to hold 100 cans, but that depends on how much ice you include. I typically use a heavy hand with ice, and the inside of the Xtreme 5 leaves ample room for food and drinks.

I suspect that one of the ways Coleman keeps costs down is by making the Xtreme 5 out of traditional injection-molded plastic rather than the insulated polyethylene you’ll see on some coolers. I’m sure it’s easier to dent this kind of material, but it looks like it will hold up well as long as you don’t abuse it.

At this price, it’s nice to see a few convenience features that separate the Xtreme 5 from entry-level coolers. Most notably, the lid is able to support 250 pounds. Having an extra seat and place to stack your belongings is good, but I’m more interested in what that rating says about the cooler’s overall durability. It also includes four cup holders and a ruler for the anglers among us. The fit is snug — it takes some effort to open and close, but that’s one of the ways this cooler keeps temperatures under control, and Coleman claims it can preserve ice for five days.

How we tested the Coleman Xtreme 5 cooler

I’m not about to phone it in for my loyal readers, so I ran down to the gas station and picked up three bags of ice and a 12-pack of Spotted Cow. One bag provided a base layer of ice, and the other two went on top of the beer. Coleman’s instruction manual (yes, for a cooler) specified that packing ice on top of food and drinks is more effective than the other way around. The ambient temperature was about 75 degrees (all degrees here are Fahrenheit, the official temperature scale of countries that have been to the moon).

Right away, the cooler dropped to 40 degrees. I sampled one of the beers to verify that it, too, was pleasantly chilled, which it was. The FDA recommends that refrigerators are kept at or below 40 degrees to prevent the growth of bacteria, so initial signs suggested that a well-iced Coleman Xtreme 5 would be an acceptable place to store packages of uncooked meat.

The temperature hovered there for two hours before dipping further to 38 degrees. I checked every hour, expecting to monitor a gradual increase as the sun and warm air saturated the insulation. To my surprise, the opposite happened. By the time I went to bed, the temperature had reached 34 degrees. When I woke up, the thermometer read 30 degrees on the dot. When lunch rolled around, the cooler was at a happy 34 degrees with solid ice cubes still holding strong.

It would be nice if I could just buy the best products available with no questions asked, but my bank account’s balance doesn’t have enough commas for that. Like you, I have to find some kind of middle ground between affordability and performance.

Bang for the buck is one area where the Coleman Xtreme 5 is very strong. Its job is to keep food and drinks cold, and it does that exceptionally well. Not only did its internal temperature stay cool 24 hours after I filled it with beer and ice, it actually fell from an initial 40 degrees to an overnight low of 30 degrees. Its 70-liter capacity is large enough for a family cookout or several days at a campsite. You could stock it with drinks and leave it in a boat all week. It has cup holders and hinged handles for convenience, and it’s a hell of a lot stronger than the flimsy styrofoam coolers at the gas station. I’ll be honest in saying that it doesn’t offer the same kind of performance and durability as trendy, more expensive coolers, but it’s also about a third of the price.

While I wish the Xtreme 5 was a little more robust, its lightweight construction does make it easier to transport. Coolers are awkward to carry because of their size and shape, even when they aren’t particularly heavy. This one weighed in at just a touch more than 10 pounds with a 12-pack of cans and three bags of ice; totally manageable. When empty, it’s light enough to toss in the car with one hand. Barbeques shouldn’t feel like unit PT, after all.

What we don’t like about the Coleman Xtreme 5 cooler

There’s a lot to like about the Coleman Xtreme 5 cooler, but the attractive price didn’t happen by accident. If there’s one criticism to be made, it’s questionable durability. My test cooler functioned without issue, but long-term success is a bigger challenge. I like that the thin walls are light, but they can’t be expected to hold up to bumps and scrapes as well as heavy-duty coolers. They’re also what the hinges are screwed into, so a clumsy hand or strong wind could rip the screws out of this cooler before you know it.

None of these drawbacks are a reason to avoid the Coleman Xtreme 5, but you should be aware of them before braving offshore wind or inviting your rowdy friends over on gameday.

There were two main questions that kept coming to mind during this test:

In terms of effectiveness, this Coleman punches above its weight. In fact, the only concern I had was that my beer would freeze because the cooler’s internal temperature stayed at 30 degrees overnight. Not only is it effective enough for a hot summer cookout, but I’d also trust it with a week’s supply of food at a campsite. Remember that I tested this cooler with three bags of ice and opened the lid every hour (during the day) to read the thermometer. More expensive coolers have their advantages, but I can’t fault the Xtreme 5’s ability to stay cold.

This might not come as a surprise, but the high-dollar coolers do have some justifications for their high prices beyond the label on the lid. While the Xtreme 5 performed admirably sitting in my yard, moving it made me question its longevity. My three bags of ice and 12 cans of beer combined with the cooler for a gross weight of 10.2 pounds. At that weight, the handles exhibited noticeable flex when I picked up the cooler. The hinges were functional, but I know those screws are barely held into the injection-molded plastic wall.

I’d feel comfortable icing down food and drinks for a picnic if I could park nearby. I’d also use this to get cold groceries home in the summer. For heavy-duty things like packing meat home from the deer stand or providing enough beer for an all-day tailgate, I’d prefer something stronger. Breaking a handle or hinge under those circumstances would be a serious downer, to say the least––and could potentially even constitute a party foul.

Coolers are obviously designed to keep temperatures down, but their insulation can also work the other way around. If you smoke meat, a cooler of this size is a great way to hold your finished meat until mealtime. Large cuts like briskets have notoriously unpredictable cook times, so I rely on a cooler to keep them hot and ready to serve whenever they reach the magic temperature of 204 degrees before I’m ready to serve. Instead of filling the extra space with ice, wrap the meat in foil and pack towels around it to fill the cooler. This will prevent it from overcooking and drying out, but it will still be hot and ready when your guests arrive.

FAQs about the Coleman Xtreme 5

Q. How much does the Coleman Xtreme 5 cooler cost?

A. I found it on sale for $69.99. That’s a lot easier to stomach than some of the trendy high-dollar coolers out there.

Q. How much can I fit in the Coleman Xtreme 5 cooler?

A. Coleman rates the Xtreme 5 as a 100-can cooler. The 70-liter capacity is enough room for food and drinks for several people.

Q. How long does ice last in this cooler?

A. Coleman claims that the Xtreme 5 can preserve ice for five days. Your results will depend on the ambient temperature, what kind of food and drinks you store, how much ice you use, and how often the cooler is opened. Five days is definitely attainable, though.

Q. How does Coleman compare to other cooler manufacturers?

A. A lot of people would argue that premium cooler prices have gotten out of hand lately, and they have a point. Do brands like Yeti outperform Coleman and Igloo? Maybe in certain circumstances, but you need to care a whole lot about your cooler to justify spending that kind of money on one.

Q. Does this cooler have wheels?

A. There are wheeled versions of the Xtreme 5, but the one I tested did not have wheels. A cooler this big can definitely get heavy. If that’s an important feature to you, check carefully when you place your order.

​​Scott Murdock is a Marine Corps veteran and contributor to Task & Purpose. He’s selflessly committed himself to experiencing the best gear, gadgets, stories, and alcoholic beverages in the service of you, the reader.