This sleek travel coffee press is one of the lightest on the market. 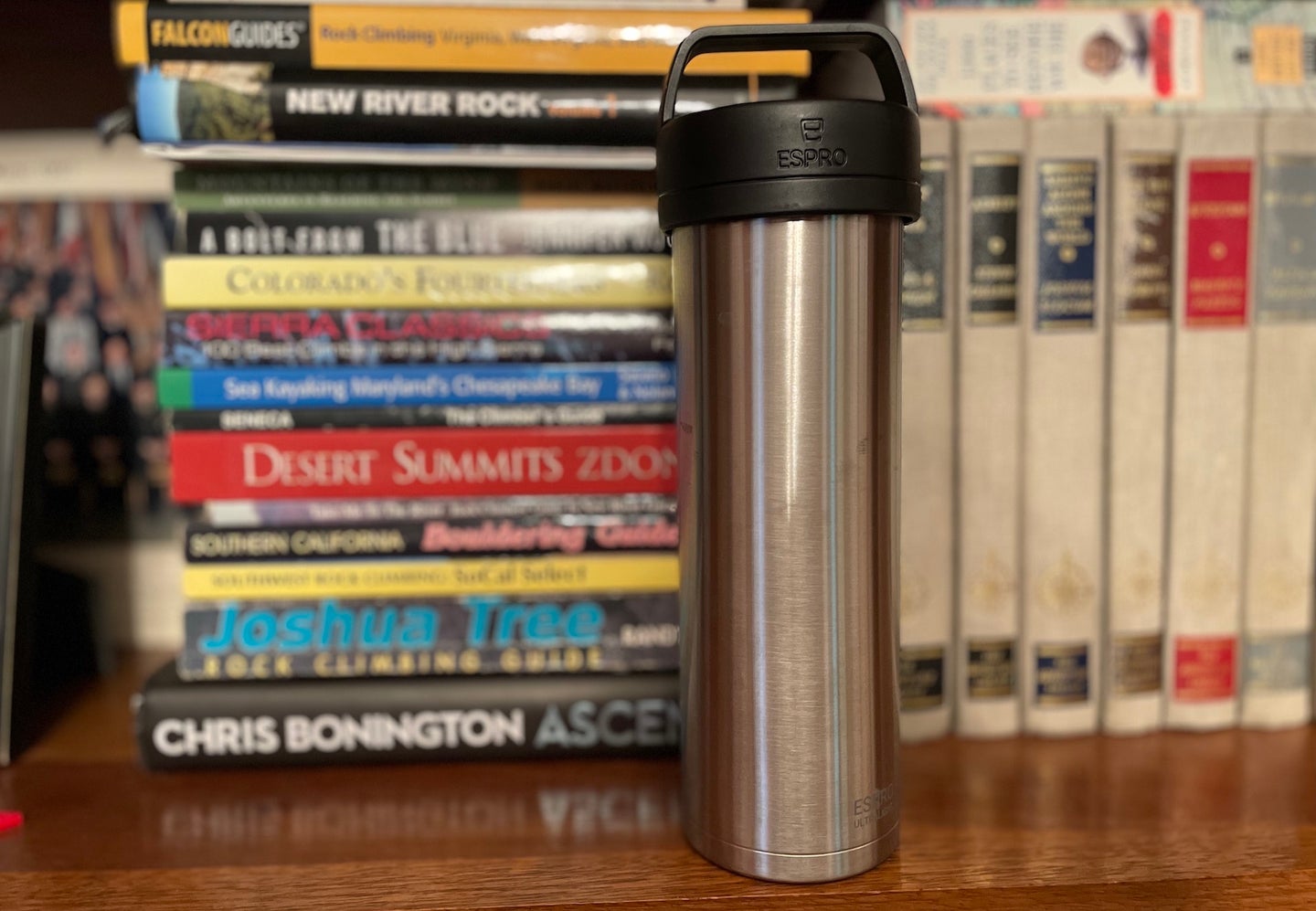 I spend a considerable amount of time in the backcountry each year. My wife and I are section hiking the Appalachian Trail and I’m always looking for new, lighter equipment to lessen our load. After 20 years of using overbuilt, heavy, and poorly designed Marine Corps gear, I’ve become a fanatic on carrying just the essentials and cutting weight where I can. One thing I won’t sacrifice on the trail, however, is good coffee. Let’s face it: Living in the outdoors can bring both breathtaking beauty and a fair amount of suffering, so it’s important to start each day right.

For me, that begins at nautical twilight with a hot brew and a thought or two about how far humanity has come over the millennia. Scientists and historians have tracked down the origins of the human cultivation of coffee to the Ethiopian plateau in the 9th century. Local legend has it that a goat herder by the name of Kaldi discovered the stimulant effects of coffee after watching his goats eat the red berries and do crazy shit all night. Our man Kaldi took his observation and shared some of the berries with a local monk who, in monkly fashion, handcrafted a brew from the seeds and found that he too felt a similar buzz as the goats. So the monk told the abbot, and the abbot, realizing he could keep his monks awake longer to pray and copy ancient texts, made coffee the official beverage of his abbey.

Now, we’ve come a long way since Kaldi and his goats, and you don’t have to be a monk to handle a modern coffee press. Today, we’re testing the ESPRO P0 ultralight coffee press to see how it stands up.

The ESPRO P0 ultralight coffee press arrived in a recycled cardboard box with minimal packaging or extraneous waste. I dug the minimalist approach, absence of single-use plastics, and sleek, modern design. In fact, the only marketing materials that accompanied the press was the easy-to-remove label that briefly described the product in English and French.

The ESPRO P0 is made of a double-insulated stainless steel body and a BPA-, BPS-, and phthalate-free black plastic lid and plunger filter. It is capable of making 12 ounces of coffee and the total internal capacity is 16 ounces (473 mL). It’s also pretty light at just under 10 ounces (276 grams).

How we tested the ESPRO P0 ultralight coffee press

I used the ESPRO P0 exclusively for a week to make my morning brew and tinkered with various coffee grinds, coffee and water ratios, water temperatures, and brew times. I always follow the manufacturer’s instructions to a T on the first test, and then tinker to dial things in to get the best brew.

Before we start any coffee device evaluation, it’s essential to ensure you have the right stuff to craft your brew. Great coffee comes down to several key elements:

Test 1: Thermal efficiency. When it comes to stainless steel vacuum insulated thermoses, we like to see them keep hot things hot for at least four hours, cold things cold for five, and iced drinks icy for about 20. I filled the ESPRO P0 ultralight coffee press with boiling water, measured it with a deep-fry thermometer, put the lid on, waited four hours, and then took a second measurement. At time (T) = 0 minutes, the water temperature was 200 degrees Fahrenheit, and at time (T) = 4 hours, the temperature was 142 degrees Fahrenheit, a drop of 58 degrees. Now, 142 degrees is still pretty warm, but it won’t scald the typical tongue. Dr. Sam Mandell at the UW Medicine Regional Burn center says anything over 160 degrees Fahrenheit will cause a burn. Coffee at 180 to 190 degrees Fahrenheit can scald. The downside is that you might need skin grafts. The upside is that you might be able to find an ambulance-chasing retired staff judge advocate and sue McDonald’s for $3 million. So be careful, ya idiots.

To test the ESPRO P0’s cold-keeping abilities, we filled it with 45 degrees Fahrenheit water, capped it, waited 5 hours, and checked again. The water temp was 54.7 degrees Fahrenheit, a gain of 9.7 degrees. That’s not bad. While still cool, it wasn’t cold but it was still refreshing.

Test 2: Portability. The ESPRO P0 is light and compact at 9 inches tall and 2.5 inches in diameter. I carried it around in my backpack and it fits nicely in my truck’s drink holder. The cap also has a loop that is big enough to accept a carabiner, so that’s a plus for securing it to the outside of a pack if you prefer. Just make sure the lid doesn’t come unscrewed. I like to keep things like this stowed inside my pack, especially when climbing. I had a one-liter Nalgene water bottle come hurtling down from 100 feet above while climbing once and it just missed me. Not cool.

Test 3: Ease of use. The ESPRO P0 is Marine-proof. The directions are pretty simple: Get 15 to 22 grams of medium-coarse coffee, add water to the MAX line (about 428 grams), stir, wait four minutes, and plunge. Then, you can either drink it or screw on the cap and go. Easy peasy. I did find the diameter of the vessel and fill line to be a bit problematic: at 2.5 inches, the neck of the container is a bit narrow for most coffee scoops to navigate. A three-inch opening might be a bit better. Also, on several plunging attempts with the filter basket, coffee grinds and water overflowed out of the container and onto the counter. I was able to avoid this by filling the vessel about a half-inch below the recommended fill line.

Test 4: Capacity. A standard cup of coffee is 8 ounces, and the ESPRO P0 will make 12 ounces and hold 16 ounces (because the plunger takes up space in the interior).

Test 5: Delivery. I was able to make a decent cup of coffee using the manufacturer’s directions of 15 to 22 grams of coarse ground coffee per 428 grams of water at a four-minute brew time. I found 15 grams to be a bit weak, slightly sour, and under-expressed, but the 22-gram brew hit the mark with a bold, properly-extracted cup. Most baristas recommend a 1:16 coffee-to-water ratio for French presses, so I tried 26 grams of coffee at a four-minute brew and that turned out pretty tasty.

ESPRO claimed the double filter design stops the extraction of the grinds completely to prevent the coffee from being bitter. I wanted to test this because the best practice for the French press technique is to pour off the coffee immediately after plunging. So I made a brew and let it sit in the container for four hours. While the filter plunge kept the coffee grounds at the bottom of the vessel, the coffee tasted a bit bitter. I still stand by the recommendation to pour French pressed coffee off the grinds immediately after plunging, rinse out the thermos, and pour the coffee back in. You’ll get a better cup this way.

The ESPRO P0 is also designed to make tea. I’m not a big tea drinker, like Brandon Friedman at Rakkasan Tea Company, but I do like a good Yerba mate, which is a caffeine-saturated brew made in South America by the indigenous Guarani and Tupi communities from Ilex paraguariensis, a cousin of the holly plant. I put the Yerba mate leaves in the P0’s basket, dumped in some 160 degrees Fahrenheit water and brewed up a great drink. Mate has a unique, earthy flavor and you should give it a try sometime. I recommend Cruz de Malta Yerba Mate.

What we like about the ESPRO P0 ultralight coffee press

There’s a lot to like about the ESPRO P0 ultralight coffee press.

First, it’s ultralight. At 276 grams (dry weight) or just under 10 ounces, it won’t feel like a boat anchor in your pack. I was amazed at how easy the plunger cleans up with a quick spray of water. The P0 looks sleek, is well-designed, and is a snap to disassemble. It’s also dishwasher-safe. While most French presses are dual use (coffee or tea), I liked the design of the tea leaf basket in the P0. The double filter seemed to work pretty well at keeping sludge and grinds out of the cup, even though some inevitably slipped by. ESPRO provides six color choices and ensures the product is BPA-, BOS-, and phthalate-free so you don’t wind up growing tentacles out of your forehead. The lid has a sensible design and I like that you can fit a carabiner through the loop. The product is designed in Canada, which is a plus because they are some of our only friends left in the world. I also appreciated that the P0 was launched on Kickstarter in 2018 with a $58,000 capital raise. Most importantly, I was able to produce a solid, good-tasting cup of coffee with it.

While I generally liked the P0, there are a few tweaks I’d recommend for the 2.0 version. First, the opening could be a bit wider to accommodate coffee scoops. It’s a bit narrow. The filter plunger can be a bit hard to press even with coarse grinds. It’s not impossible, but there is much more resistance than a typical Bodum press. While I like that it was designed in Canada, it’s made in China. And it’s on the pricer end of insulated travel mugs at an MSRP of $44.95. Also, I was a bit underwhelmed with the capacity. While the vessel holds 16 ounces, it only makes 12 ounces of coffee due to the space the plunger filter takes.

I’m always down for a product that’s lighter and more capable than what I currently use, and the ESPRO P0 ultralight coffee press fits the bill. This is a buy, in my opinion. To increase capacity on backpacking trips, I might even ditch the French press insert, fill it with espresso shots, and later make Americanos by adding boiling water to each cup (2 ounces of hot water per 1 ounce of espresso). With a two-ounce shot of espresso, you should be able to get eight Americanos out of the flask.

Q. How much does the ESPRO P0 ultralight coffee press press cost?

Q. French presses are notorious for letting grinds and sludge through. How good is the P0’s filter?

A. The two very fine metal mesh filters and silicon plunger lip do a better than average job in filtering the coffee. While there was some sludge in the bottom of my cup, there was far less than when I used my Bodum press. The best way to get rid of it all is to run the coffee through a paper filter, and that takes more time and effort.

A. Absolutely. It’s also easy to wash off in the sink.

Q. What’s the body made of?

A. The body of the ESPRO P0 ultralight coffee press is made from stainless steel.