Essential drinking gear you never knew you needed (or wanted)

Now you’ve got everything you need to transform yourself into a kitted-out, booze-swilling Rambo. 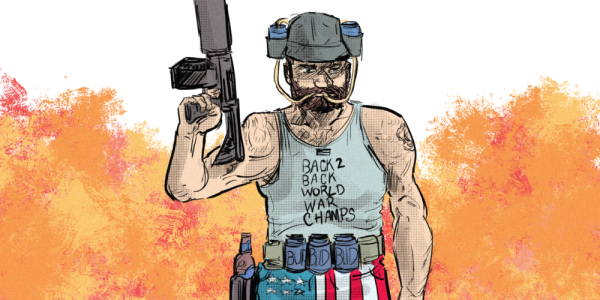 Editor's note: An earlier version of this article was originally published on March 3, 2017.

The internet is filled to the brim with random shit you can buy or build yourself, but a lot of the stuff out there just seems wildly impractical. It's kind of hard to imagine a situation in which you’d really need something like, I dunno, a beer holster.

That is, of course, until you begin scrolling around digital marketplaces and do-it-yourself sites looking at other beer-related gear and realize: “Holy shit, if I was a total drunk degenerate I could outfit myself with a full gear list for drinking, and go straight SEAL Team 6 on some PBR.”

Which is what I decided to do, starting with the beer holster, of which there are many variations. Some are designed in a blatantly western style, others are more ’Murica. Once you’ve got that locked down, and have trained yourself not to run when you have an open beer holstered, go ahead and grab one of the many, many beer bandoleers online.

Do you prefer a six pack's worth of cold Bud Light? Then here you go. For those seeking a higher level of drunken debauchery, there’s the 24-pack bandoleer, because light beer is basically water anyway. And of course, the pièce de résistance, the liquor bottle ankle holster, for those who want to be drunk in public, but don’t want anyone to know how it happened.

With ammo covered, how about weaponry. Yes, beer weaponry. Introducing the Can Cannon from the folks over at X Products. Probably the only time that it’s okay to mix drinking and shooting, the can cannon attaches to an AR-15 and lets you fire 12-ounce cans (or, as we like to think of them: “66mm can-ades”) up to 105 yards into the distance.

Which brings us to the final piece of gear: You need a helmet, and obviously, not any kind of helmet: a beer helmet, like this, which you can make yourself. This thing lets you swill down four cans (though since you’re making it yourself, you could have it hold more or fewer) before having to refill it. It also has the added benefit of protecting you from incoming cans shot out of a cannon.

Now you’ve got everything you need to transform yourself into a kitted-out, booze-swilling Rambo rocking a helmet with the words “Born to drink” written on the side of it.