Review: the Phalanx Defense Systems Stealth Operator is proof that universal holsters don’t have to suck 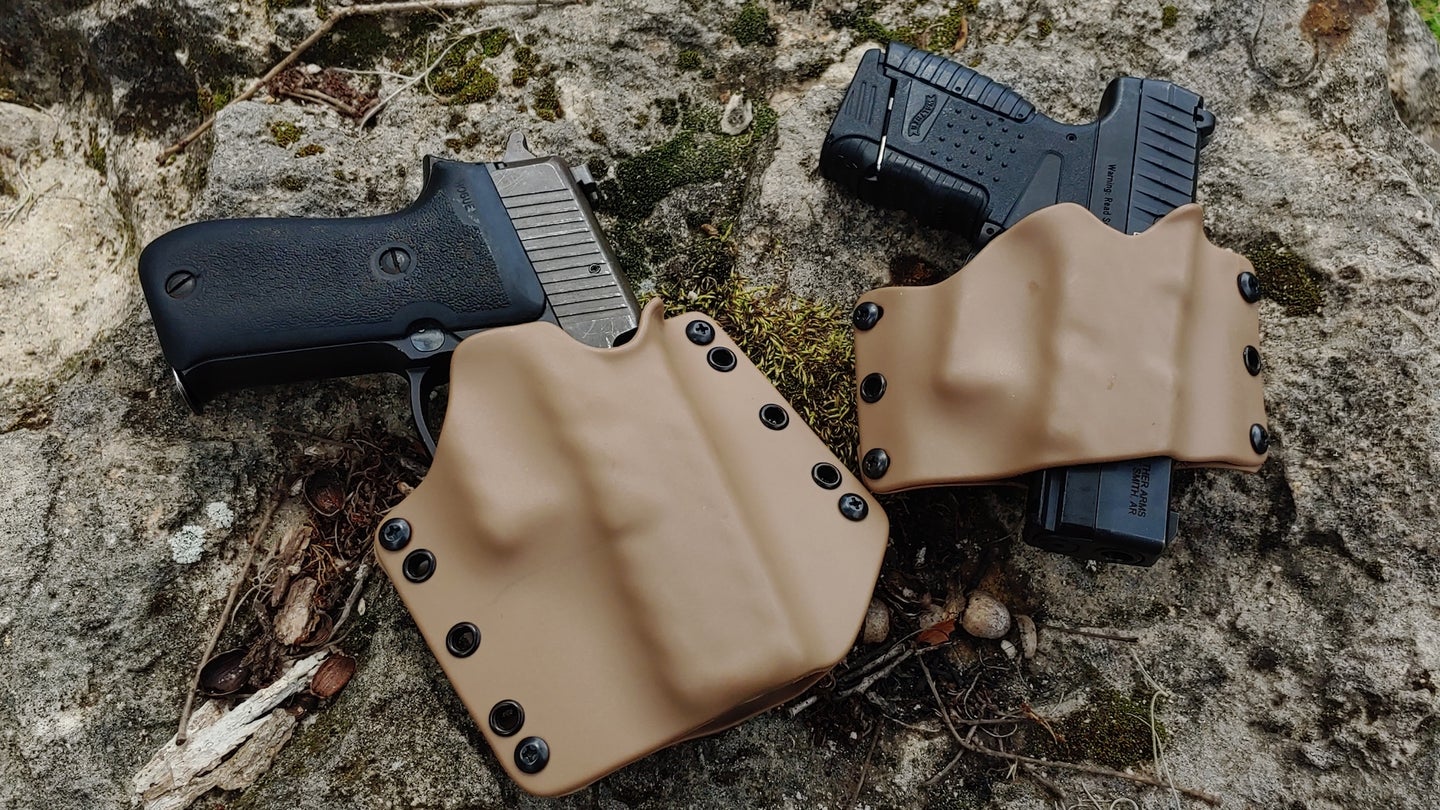 There was a time where I swore off universal holsters. If you asked me for holster advice, I would immediately discount anything universal. Back in the day, ‘universal’ holster meant a crappy soft nylon rig that allowed you to shove whatever gun you wanted into it with terrible retention, horrid trigger protection, and often crummy access to the firearm. Times are changing, though, and holsters like the Phalanx Defense Systems Stealth Operator, the Phlster Floodlight, and even the Blackhawk Omnivore have made it impossible to discount universal holsters completely.

I acquired my first Stealth Operator at a Gainesville, Florida gun store when looking for a holster for my PPS and CZ P09. At the time, I never thought a single holster would fit both, but the guy at the gun store swore by them. He offered me an out-of-the-package one to try out and imagine my shock when both guns fit and seemingly fit well. The Stealth Operator boasts compatibility with over 150 different firearms, and I purchased two that day, a compact and full-sized model. Since then, I’ve used both extensively for a wide variety of tasks, from gun reviews to concealed carry.

What makes these holsters different from most is the fact they are made entirely from polymer. Unlike soft nylon, these holsters offer a rigid frame versus a soft frame. Soft frames collapse and generally suck, but rigid frames allow easy reholstering, an easy draw, and most of all, a safe method of carry. I’ve tried half a dozen different firearms in these holsters, and each time the holster clicks in with ease. The click you hear is the sound of the ‘Frame Lock’ technology. The holster pinches firearms around the trigger guard. This offers a form of passive retention that ensures the holster stays in place without the need for a clumsy strap and button.

Each and every firearm I’ve clicked into place has had a protected trigger and offered me excellent access to the weapon. I’ve remained impressed with the system and with Phalanx Defense Systems in general. They are a Florida-based company that produces great products ranging from holsters to high-tech body armor and do tons for the community. Here’s why the Stealth Operator might just be your next universal holster of choice.

The Phalanx Defense Systems packaging is quite simple, consisting of a cardboard backer that allows the holster to be easily shelved. The latest incarnation allows you to try your gun while it’s packaged in the store, although you should ensure the store doesn’t mind you doing so.

Popping the holster out of the packaging takes no time at all, and you’re ready to go. Phalanx offers both outside the waistband and inside the waistband options, as well as mag pouches. In fact, you can find numerous combo deals that include two holsters or a holster and mag pouch combination.

The compact offers an open slide design to accommodate numerous small guns a bit better. The exposed barrel also allows for muzzle devices and similar attachments. The full-sized model extends the holster to envelop the entire slide. The full-sized model works best with guns-sized Glock 19 and up. The compact model can fit full-sized guns, but the longer barrels and slides make it possible for them to be bumped out of the exposed bottom holster.

The Stealth Operator comes in black or flat dark earth, and for the OWB models, we get polymer belt loops that fit up to a 1.75-inch belt. They are fixed in place, and even after years of use, the loops have never loosened. It slides on with ease and works fine with a 1.5-inch belt as well.

Stealth Operator holsters are injection molded designs that look as if they’ve been molded for your gun. Admittedly they can’t be molded for each and every gun, but they sure seem to be. The fit is near perfect, and the holster doesn’t seem to scrape or damage your finish if you’re picky about that.

The Stealth Operator isn’t a duty-style holster and has a gentle curve to help improve concealment. It rides tight to the body and makes it easy to stash under a t-shirt. Even big guns conceal with relative ease.

How we tested the Phalanx Defense Systems Stealth Operator holster

I wore the hell out of it. Well, I wore them both and brought them back to my concealed carry lineup. Admittedly, they left my waist when I upgraded to the SIG P365, and the P365 proved too small for the holster. However, I went back to my modern James Bond gun and carried the PPS M1 for my daily carry.

Around the house, I packed a Glock 17 or a West German SIG P220 in the full-sized holster. I wore one or the other all day, from the time I got dressed to the time I showered and went to bed. From a comfort perspective, I barely noticed them. Admittedly, the heftier guns pulled at my waist more than the PPS, but my belt did its job as well.

The holster has jagged points that poke and prod while carried. The holster stays put as well and doesn’t try to rotate or get away from me. It stays put and offers that consistent draw point.

Speaking of: can we test a holster without some range time? Well, range and dry fire time involving lots of draws. I started slow and dry and added speed as I warmed up. I committed hundreds of draws, both dry and live. Enough to get tennis elbow. It became an ASMR series of noises, with various clicks and bangs occurring in a steady, repeating, and consistent pattern. I got fast enough to complete the Collateral scene in which Tom Cruise executed a great box drill.

The holster’s cut makes it easy to get a grip on the gun and draw it with ease. I’ve used OWB rigs that take a chunk of finger when gripped wrong, but this isn’t one of those holsters. I could retrieve the weapon with ease and put it into play without issue. I can feel the passive retention release the weapon with every draw, and it’s consistent.

Drawing from awkward positions, like kneeling, bent over behind cover, and even on the ground, doesn’t offer any real challenge to the Stealth Operator. I can get the weapon when I want it and when I need it. I can do so safely without any interference with the trigger as I go from holstered to on target.

When it comes to replacing the gun in the holster, there are also no issues present. I can slide the gun back in the holster safely without any issues. As far as passive retention goes, the Stealth Operator grants you as much as it can.

That loud click and the Frame Lock retention works very well. Holding the holster upside down and shaking it won’t release the gun. It takes two hands and an overhead thrust to get the gun-free. With an unloaded firearm holstered, I executed a few box jumps and burpees wearing the rig, and the gun didn’t leave its assigned place of work or even shift. It’s not coming out without a dedicated tug.

After all these draws, jumps, and carrying, the holsters have stuck together without durability issues. I’ve had both since maybe 2015 or so, and neither has ever tapped out.

What we like about the Phalanx Defense Systems Stealth Operator holster

I love the fact that it fits so many guns securely, safely and offers a rather nice option for concealment. It made me always offer a caveat when I say universal holsters suck. Just as a concealed carry holster, I appreciate the ease of access, the comfort, and obviously, its close-fitting design that makes it easy to hide.

The impressive retention is worth noting. It’s surprisingly consistent among a variety of different guns. It clings tight to guns ranging from metal-frame, single-stack .45 ACPs like the P220 to modern polymer frame double-stack 9mms like the Glock 19.

From a safety perspective, the holster completely envelopes the trigger and protects it from being pulled. This is essential with any holster; an unsafe holster automatically gets tossed in the trash.

After six years of use, these things have helped up after innumerable draws and have been worn extensively. They are, without a doubt, super durable, and surprisingly well made. Oh, and by the way, they are also extremely affordable — and getting an affordable, American-made holster that excels in the basics of being an effective holster is often a challenge.

If you want to carry a plain Jain gun, then the Stealth Operator works well. If you want to go fully custom, you’ll have to look elsewhere.

The Phalanx Defense Stealth Operator provides a safe, accessible holster suitable for concealed carry and defensive use. They offer excellent retention, great fit, and make it easy to carry a wide variety of guns, but are perfectly suitable for just one gun as well. Add in the versatility and affordable price point, and it’s tough to beat. If you’re a gear head who loves to upgrade your guns, maybe look elsewhere.

Q: How much does the Phalanx Defense Systems Stealth Operator holster cost?

A: The Phalanx Defense Systems Stealth Operator retails for around $35 at Palmetto State Armory.

A: I’ve never used it, but yes, they offer a lifetime warranty.