Review: the Praesidus A-11 Marston Mat is a time-telling piece of D-Day

A fitting tribute to the storming of Normandy Beach. 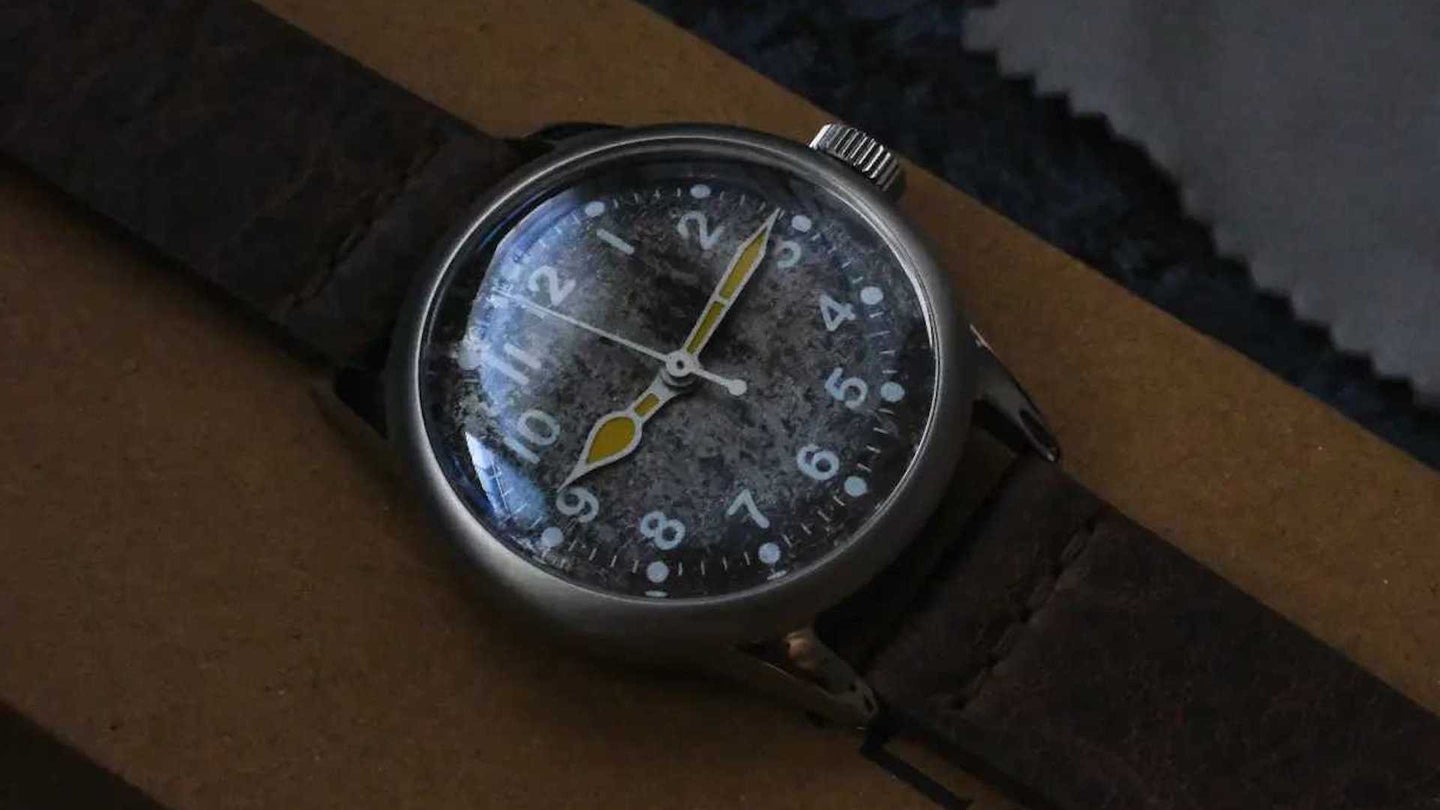 With their line of A-11 homage watches, Praesidus Watches wants to become a watch microbrand for World War II history buffs. The core design is based on the ubiquitous WWII wristwatch worn by many U.S. service members, a crucial part of combat timekeeping during the largest global conflict in history. We’ve previously covered the machinegunner-themed Vince Speranza watch, and while our opinions were mixed on how it performed as a watch, the themed nature of it was undeniably cool.

After publishing that article, representatives from Praesidus followed up to say that they had a new project: an A-11 watch that actually carries a piece of D-Day. They call it the “Marston Mat,” so named because it featured an actual piece of metal sheets by the same name. These sheets were deployed all over every battlefield of WWII to make field-expedient roads, landing strips, and — in the case of this watch — ramps for vehicles to get onto the shores of Normandy during the D-Day invasion.

Praesidus has leaned heavily into the WWII-themed watch angle, and by making the dial of the watch a piece of Marston Mat, they’ve crafted something that is a legitimate piece of history. This watch is limited to 200 pieces, owing in no small part to the fact that the dial has to be made of very rare material.

As a point of disclosure, Praesidus loaned us a single working prototype for the purposes of testing and photography. This article is not sponsored by Praesidus in any way, and they did not have any editorial input.

The Praesidus A-11 Marston Mat is 38mm in diameter, 12mm thick, and features 20mm lugs. It’s constructed from standard 316L stainless steel and features a box domed sapphire crystal to resemble the acrylic crystals of the original A-11 watches. Praesidus says they’ll ship the watch with a quick-detach brown leather strap and a green canvas strap. The version I was sent included the brown leather strap, which is made of a nubuck-style matte leather, and which is extremely soft, so that’s a huge standout feature.

The caseback is plain, featuring text that explains the brand, model, and where the movement is made. The sapphire crystal is high-domed and is extremely good-looking, evoking the original plastic crystals but with none of the durability concerns. The Marston Mat dial is speckled and looks very pleasant, however, at any viewing angle other than directly head-on, the numerals completely disappear, making this a difficult-to-read watch. The dial is the standard A-11 pattern, and Praesidus claims that the numerals and hands are painted in Super Luminova, but the lume is almost nonexistent on the model that I received, making this a very low-visibility watch.

I wore this watch everywhere I went for a week. I wore it in various lighting conditions and in different outfits. That included moving from bright to dark areas, measuring timekeeping, and evaluating long-term comfort. Overall, the watch performed very similarly in terms of fitment to the Vince Speranza, since it uses the same case and crystal.

The Marston Mat also carries over the tradition of having a super comfortable strap, albeit this one’s brown strap is much more wearable with casual outfits than the Vince Speranza’s black machine gun barrel-shaped strap. The lack of lume and the extremely glare-reflecting laminated Marston Mat dial means that this watch is basically unreadable except in the shade, due to the fact that sunlight washes it out and the lume struggles in low light. In fact, the dial is borderline illegible unless viewed from head-on in any lighting condition, due to the fact that the numbers are printed on, have no depth, and don’t have sufficient contrast against any sort of light reflection, which gets worse as your viewing angle gets lower.

In terms of timekeeping, the Festina Soprod P024 movement performed adequately well and averaged about +7 seconds per day. The P024 is hi-beat, a step up from the Seiko NH35 on the Vince Speranza, although the winding action was very gritty, and the automatic winding rotor is incredibly loud.

What we like about the Praesidus A-11 Marston Mat

This is a seriously cool watch. I spent a week walking around with a piece of D-Day on my wrist, and that can’t be stressed enough for the coolness factor. If you’re a huge WWII history fan, or if your unit was at D-Day and you want to have a piece of that with you, this is a great way to incorporate that into something that you can wear every day.

The strap is also super comfortable and is easily one of the softest and most pliable leather straps that I’ve ever worn, which is praiseworthy in and of itself. The choice of movement is a good one as well, since the P024 is a much better movement than the pedestrian NH35, although I would have preferred the more common Sellita SW200.

The whole purpose of a watch is that you be able to tell time with it, and while the Marston Mat A-11 does that, it only does so just barely. The fact that in anything but the most favorable lighting conditions make this watch almost completely illegible is a huge limitation and hinders the practicality of this watch to the point of making it purely ornamental. The movement is another sticking point, with the gritty winding action and loud rotor placing it a step below something like a Sellita SW200 in terms of premium feel, especially at this price point.

This is a great concept for a watch. The Marston Mat dial is a very nice touch, and having an actual piece of D-Day with me is a cool feeling every time I glance at my wrist. Unfortunately, this concept is imperfect, and needs work, given that the dial finishing causes the indices to disappear, and like the Vince Speranza edition, it has poor luminescence. These might be due to this particular watch being a prototype, but they need to be corrected, especially since the Marston Mat is pushing $600 in the sticker price. I’ll be keeping a close eye on the release model to see if Praesidus corrects these issues, which would make this watch a work of art as well as a truly practical time-telling device.

FAQs about the Praesidus A-11 Marston Mat

Q. How much does the Praesidus A-11 Marston Mat cost?

A. The retail price for the Praesidus A-11 Marston Mat is $595 at the time of writing.

Q: What is a Marston Mat?

A: Marston Mats, known also by their formal name of Perforated Steel Planking, were a type of metal grating laid over dirt, grass, and other ground to make an improvised pavement, allowing the construction of field-expedient roads, airfields, and ramps. These were used up until the Vietnam era, when the proliferation of jet fighters and helicopters meant that the holes in the grating would increase the risk of Foreign Object Damage, known to pilots as FOD, aka when debris gets kicked up by rotor wash or sucked into a jet engine. Learn more here.

A: Festina, under the brand Soprod, makes the P024 movement. It’s based on the classic ETA 2824 movement and is mildly more shock-resistant. Alternative Swiss movements are growing in popularity, as the megalith that is the Swatch group, which owns many popular Swiss brands and ETA movements, has clamped down on the ability for third-party microbrands to get their parts, giving other brands a chance to fill the gap. Learn more here.

Q: Did you know there were no Marines at D-Day?

A: Yes, I get to hear about it every June 6th from crusty West Point grads.