Review: the Praesidus Vince Speranza is a unique tribute to the WWII A-11 field watch

Is this watch as successful as its namesake? 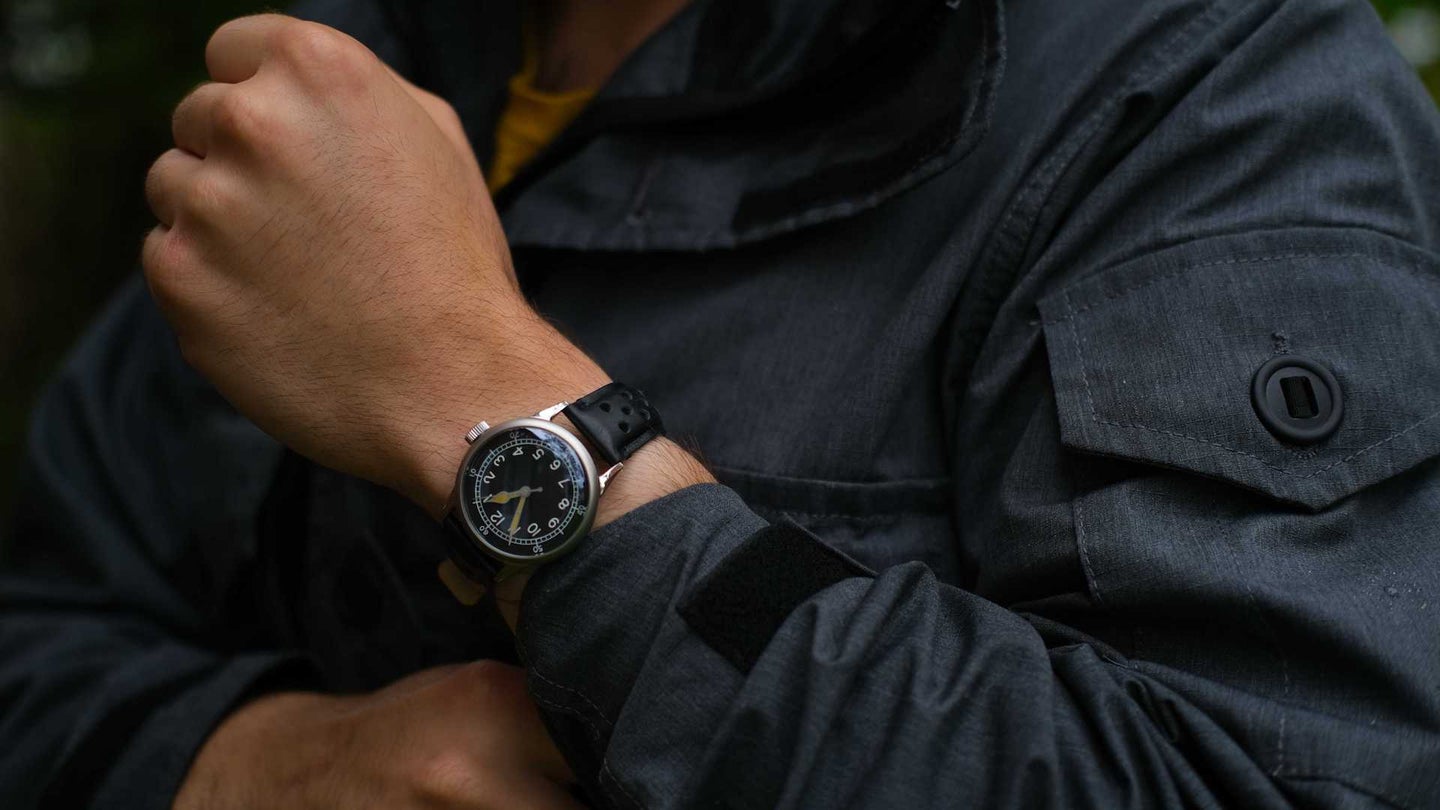 The venerable A-11 was a brass-cased, plastic glass, manual wind watch with a fascinating place in the history of timekeeping. Rather than being a single watch made by a single company, ‘A-11’ referred to a contract for Army Specification 55-1B, a navigation watch that was “reasonably accurate and waterproof.” These watches were barebones, utilitarian, and unglamorous. Today, despite having been made by companies like Hamilton, Bulova, and Elgin, surviving examples are not particularly expensive due to the fact that they keep poor time by modern standards, and aren’t meant to last very long.

Despite these flaws, the appeal of this style of watch has endured for decades, and companies like Hamilton have kept the A-11 spirit alive with their Khaki Field watches. Indeed, with the surge in so-called micro-brand watches in recent years, collectors, military nerds, and history aficionados have all been searching for the perfect A-11 watch reissue.  Enter Praesidus: Rather than trying to merely replicate the deliberately cheap, utilitarian characteristics of the original, the company introduced a line of improved A-11 watches with modern movements, improved build materials, and specific features designed to honor the watch’s World War II heritage.

The A-11 Vince Speranza edition sets itself apart from the rest of the Praesidus catalog not only in construction but also in the history that it honors. Praesidus doubled down on this unique design by getting Speranza himself to act as a design consultant and brand ambassador, making this possibly the only WWII-style watch advertised by a man who wore the original into combat.

For the purposes of this review, Praesidus provided me with an A-11 Vince Speranza for this article, although the company gave no stipulations regarding editorial input, and sent it fully aware that I’m a fairly exacting critic. Here’s what we like (and don’t like) about the new-and-improved A-11 — and why it might deserve a place in your watch collection.

The Praesidus A-11 came in a long, brown, cardboard box, with styling that reminded me of the boxes that WWII rations come in, both in terms of styling and their choice of text. The box contains the watch, held by elastic cords in a cardboard tray, as well as dog tags that indicate the watch’s specifications. Praesidus advertises that the retail version of this watch will feature a much more ornate converted Cigar Humidor case, adding to the “special edition” feel of the Vince Speranza edition.

The watch itself elevates the utilitarian styling of the original, adding a matte stainless steel case with polished lug tops, a very soft, specially-shaped leather strap, an automatic movement, and a highly domed box sapphire crystal, making the glass virtually scratch-proof. The case of this edition is 38mm or 42mm in diameter, much larger than the original 32mm, but more in keeping with modern sensibilities for a men’s watch.

The dial features artificially-aged luminescent paint on the cathedral-style hands, to mimic the look of the original watches, and plain white numbers with a railroad-style seconds track, with second numerals every 10 seconds. Notably, the dial features no markings, not even a brand name, which is in keeping with the original A-11 watches.

Enclosed within is a Seiko Instruments NH35 movement, a commonplace workhorse movement if a bit of a thick one, which does increase the case thickness of the Vince Speranza A-11. Praesidus offers an STP 1-11 Swiss movement, at an extra cost, as part of their Kickstarter campaign, but I can’t speak to the performance of that, as mine does not have that.

One of the most striking features of the Vince Speranza A-11 is the caseback, featuring a dedication to Vince himself, reading: “Praesidus, Type A 11-2. A 101st Airborne Division machine gunner at Bastogne, Vincent J Speranza Edition 001. “BATTLE OF THE BULGE,” December 16, 1944 – January 25, 1945.” This is punctuated by a gold-tone bullet that protrudes from the caseback, adding further visual interest, and a block of text that indicates that this watch is assembled in the USA, of imported parts.

The final distinctive feature is the aforementioned quick-release leather strap, which is made of very soft chrome-tanned black leather, and the tail of which is supposed to be shaped like the barrel of a Browning M1919A4 Machine Gun, including its conical M6 flash suppressor. This is a nice homage to Vince Speranza, but it leads to the watch having an unusually-shaped strap that makes it somewhat awkward to fasten.

How we tested the Praesidus A-11 Vince Speranza edition

For several days, I wore this watch and only this watch, and for every occasion ranging from going to the store to going on a date. The good news is that the case of the watch and styling of the dial goes with almost any outfit, and the watch is simultaneously unassuming at a distance, and very intriguing and engaging up close.

The strap is very soft, with Praesidus advertising the leather as being Italian in origin, and the perforated “rally” style strap adds to ventilation on those hot days, which is a welcomed addition. The size of the watch is just perfect on my seven-inch circumference wrist, looking understated and classic in style, while still remaining legible.

The watch is noticeably thicker than an original A-11, owing in no small part to the NH35 movement, which also features a “ghost position” where a date wheel would be, which the A-11 Vince Speranza doesn’t have. It doesn’t affect function, but it’s a sign that the Seiko movement was chosen for economical reasons, and is somewhat less thought out than the rest of the design.

The watch kept acceptable time, well within the allowable specs of the Seiko NH35, at an average of +10 seconds per day on the wrist. In low light conditions, this watch suffered hard. The numbers are legible in the dark, but the artificially aged hands barely glow, making this illegible after only a few minutes in the dark, and running contrary to the military character of this watch.

What we like about the Praesidus A-11 Vince Speranza edition

This watch is a really cool idea, releasing an A-11 Plus, of sorts. The addition of the high box-domed sapphire crystal is a great way to keep the look of the original acrylic without the scratch-prone characteristics. This is something I’d like to see expanded to their production watches, as I’m not a fan of mineral glass at all. The styling of the watch dial is also a definite win, as in daylight conditions, it looks like the ideal casual watch for on-the-go wear. The strap is supremely comfortable, and easily one of the nicer ones that come stock on a watch, even if the only one included is black, which is not my preference for a casual watch.

Another thing that might be important for people who prefer to shop American is that these watches are assembled by American workers in America, and while that’s probably a significant contribution to the price tag of this watch, some people are willing to pay extra to get extra. Finally, the backstory of this watch is really neat, and if you’re a fan of themed watches and military history, definitely consider this one.

The way I would describe the Praesidus A-11 Vince Speranza Edition is “close, but no cigar” to my overly-critical watch nerd eye. There are a lot of design decisions that hold this watch back from being perfect, and one of the biggest ones is the choice of movement.

The original A-11 was a very thin watch, housing a manual-wind movement, and this reissue uses a notoriously thick automatic movement. While I understand the desire not to make a one-to-one reissue, keeping the watch as close to the original as possible with a no-date manual wind movement would be preferable in my mind. The luminescence on this watch looks cool until you actually need to use it. It’s not like the artificially aged lume on the Orient Star Outdoor from our field watches article, where it still glows brightly despite the artificial patina, and instead makes the hands an afterthought in the dark, even after your eyes adjust to it.

The decision to brush the entire case but polish the top of the lugs is another confusing choice, as those lug tops are some of the most easily-scratched surfaces on any watch, and would likely benefit from the same bead-blasted finish. I’d prefer if the strap came with a brown option or NATO strap, but those are easily found aftermarket, so that’s barely a complaint.

The final and biggest complaint that I’ve seen with many evaluators is the cost and I can definitely see where they’re coming from. Premium materials aside, you’re paying for a field watch with a Seiko NH35 movement, which is nothing to write home about, and paying Hamilton prices for it. That price climbs even higher if you want to get the Swiss version. A lot of that cost comes from the very inspired design, premium features like the box domed sapphire crystal, and the American assembly, so it’s not like you’re paying money for nothing. It’s just a factor to consider.

The A-11 Vince Speranza edition watch is seriously cool. It successfully modernizes the historic design while paying homage to its military history and origin. Before it goes to market or in the future, I’d like to see Praesidus tweak things like the luminescent hands, the weird upper lug polishing, and offering different strap colors from the factory. Still, those who like this watch will love it.

I’d love to have an A-11 reissue that either uses the original acrylic crystal and a manual wind movement, and which fits into a budget price bracket, or a true super A-11 that features a more premium movement with this box domed sapphire crystal, and which does its best to be a premium take on the original concept. I’d also like to see a Marine Corps John Basilone edition, for obvious reasons, since the Army really gets to own the WWII media landscape thanks to Saving Private Ryan.

FAQs about the Praesidus A-11 Vince Speranza

Q. How much does the Praesidus A-11 Vince Speranza edition cost?

A. The price is $299 for the early bird NH35 pricing and $449 for the Swiss pricing, but the production model will be 31 percent more expensive, and there will be more premium packages offered for higher contributions.

Q: Who is Vincent Speranza?

A: Pfc. Vincent Speranza is an Army veteran of WWII, originating from Staten Island, New York. He fought in Europe with the 101st Airborne, going on to earn the Bronze Star Medal and the Purple Heart, among other awards. His oral history is well documented, so you can find out more information here.

Q: Who made the original A-11 watches?

A: The A-11 Watches were made by companies like Elgin, Waltham, Hamilton, and Movado. Other military watches of the era were made by Eterna, IWC, Bulova, Rolex, and Omega.