You’re Lost In Wilderness With One Piece Of Gear. What Is It?

You’re in a plane bouncing through a rough storm when the unthinkable happens and you begin to plunge toward the... 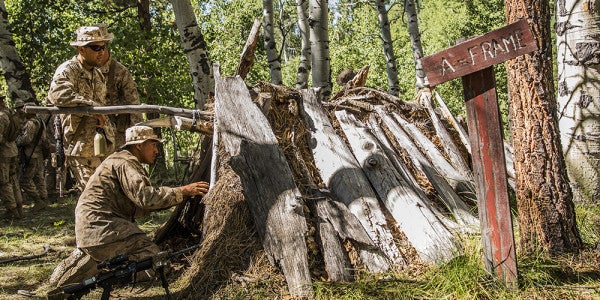 You’re in a plane bouncing through a rough storm when the unthinkable happens and you begin to plunge toward the wilderness below.

It’s okay, we’ve all thought about it. Something horrible happens and you’re stuck in the wild with just your wits and a few precious items to survive. What should you have and how do you make it through?

For help answering this question we turned to Mike Glover, an Army Special Forces veteran and the chief executive officer and co-founder of FieldCraft LLC, which teaches civilians how to survive natural disasters and extreme situations.

For this hypothetical scenario, we let Glover choose the locale before declaring his survival gear.

Sierra Nevada. Home to the infamous Donner Pass, this vast mountain range in the western United States is defined as much by its beauty as by its rugged terrain.

Glover, who's gone through Special Forces survival and urban survival training, said, “If I was in a situation where this is the one thing I had to survive, I could do what I need to survive, with a combat axe.”

What’s the first thing you should do?

“Your number one priority is finding a water source,” said Glover, explaining that your second priority needs to be finding or building shelter.

“As time goes by, you’re getting more and more dehydrated,” said Glover. “The first hours are critical.”

Your priorities are finding water to fend off dehydration and building a shelter to protect you from the elements.

Fortunately, Glover is in Sierra Nevada, and while the environment can be unforgiving — with 70-degree days turning into freezing nights — there are resources aplenty.

“If I don’t get to a point where I can build a fire and get my body heat under control before nightfall, I’m going to get hypothermic,” he said.

How do you build your shelter?

Once you’ve chopped enough wood to arrange a simple shelter for warmth, you should plan on building insulation to fill in the skeletal frame.

“I’m also building insulation with the axe by cutting off pieces of oak or pine,” said Glover, who stressed that you cannot overlook an opportunity.

For example, you can notch out pieces of wood to act as containers for water, and when your shelter is completed, you should begin gathering firewood.

Now that the most critical elements are taken care of, what else can you do with the axe?

“Having a weapon is the key to hunting, but having an axe that can actually make weapons is more important,” said Glover. “You’re not going to take down a large animal with a combat axe because you’re not going to get close enough.”

So put those day dreams of stalking and felling a deer with an expert axe throw to rest.

In addition to making spears or even a bow, you can also cut cordage to make snare traps, explained Glover, which brings us back to why the combat axe is such a good choice, especially in a wooded environment.

But in the end, simply having the right item doesn’t guarantee your survival.

“People die in survival situations because of their inability to think through situations and because of their lack of equipment and training,” explained Glover. “If you’re in the mountains and your go-to item is a combat axe and you don’t know how to use it, it’s useless.”