Few subjects related to military careers cause as much contention as the up-or-out system for promotion. Under this policy, a... 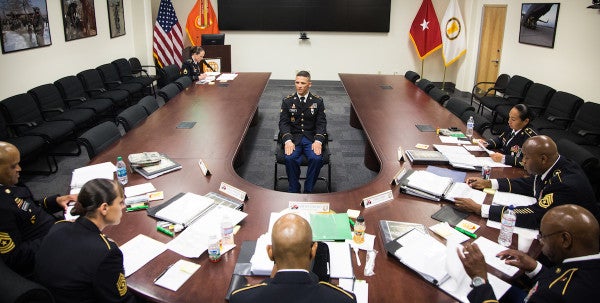 Few subjects related to military careers cause as much contention as the up-or-out system for promotion. Under this policy, a service member who is twice passed over for promotion is forced out of the military. Today, with few exceptions, service members are expected to keep climbing the ladder toward command or senior enlisted leadership positions. All of the services, in one form or the other, practice this. All of them are making a mistake.

The services must separate retention from promotion. This is so obvious it’s astounding it hasn’t been done already. Almost no organization other than the military has such a strict up-or-out system. The rest of the world acknowledges that some people excel at leading and managing others in the accomplishment of goals, while others excel at the work itself.

If you work at an automobile plant bolting on body panels, they may expect you to learn to install both the left door and the right door, but as long as you’re doing your job well, they don’t kick you out if you’re not managing the plant within 10 years. If you’re an accountant in a corporate headquarters, you can keep plugging numbers for a full career. They don’t expect you to work your way to CFO or GTFO.

Related: Why The Army Should Bring Back Senior Specialist Ranks »

The military has invested vast amounts of time and money in many of those currently passed over. They have incredible knowledge and experience that goes somewhere else when the military lets them go. Almost anywhere else, they’d be entering the most productive time of their working lives. Most of them were not found to be deficient, just not ready for the next rank. Getting rid of them has real costs.

When these people are kicked out, the military has to replace them. That replacement requires months of training and years of experience before he or she can truly take the place of the service member who was let go. This only makes sense in the most physically demanding jobs — and even in those, following strict physical fitness standards can mitigate concerns about keeping older troops.

This constant shedding of people who fail to get promoted also skews the numbers of people at each rank. We promote far too many people because of the way up-or-out is applied. Billets are often matched with rank not because they require that rank’s authority, but because they need a certain amount of experience.

In other words, the result of up-or-out is that almost everyone with a certain number of years in will have the same rank. So, for example, if a billet needs a pilot with 16 years of experience because of the subject matter expertise required, it is assigned a lieutenant colonel, even if that job has no supervisory responsibilities whatsoever. Senior ranks should mean being in charge of large numbers of people or other positions of high responsibility, not just filling a chair.

Up-or-out also means that anyone who intends to make a career of the military needs to pretend that he or she desperately wants to be a commander or senior enlisted leader. The institution is fully complicit in this, and rotates its people through schools and key developmental assignments that most of them will never fully utilize. This wastes both the individual’s time and the military’s resources.

The system isn’t working. By insisting on up-or-out, the military measures the worth of its people by whether they are judged worthy for higher rank, rather than proficiency at their job. Those two things are only sometimes the same thing.

Promotion boards still need to occur, just as they do today. The military could even make them more selective — once it abandoned the direct relationship between years of service and rank it would need far fewer O-4/5s and E-7/8s. However, those left behind ought not be shunted into the “above zone” for a perfunctory second chance before being subject to separation.

Being above zone for promotion shouldn’t be the kiss of death if an individual continues to perform in his current job. Keeping the retention board separate from promotion board would allow people to improve themselves before the next chance for promotion — giving them a chance to complete a key assignment or get more training.

Today, the typical scenario is that a service member not selected for promotion has one year to correct whatever the problem was. That’s hardly ever enough time to make a difference, so the individual fails selection a second time and is subject to separation.

Moreover, those found “not promotable” need to have other options available. The military should make much greater use of warrant officer and limited duty officer ranks, selected by competitive process based on demonstrated expertise and performance. A capable pilot, for example, might transition from a having a regular commission to being a aviation limited duty officer or even warrant officer in order to keep his expertise in the cockpit, instead of rotating through billets grooming him for command he either doesn’t want or isn’t suited for. For enlisted, all of the services would be well-served by instituting senior specialist ranks, similar to what the Army had until the mid 1980s. This would allow the military to keep and reward specialized personnel and to keep them in the areas of their expertise.

At the same time, we can’t keep everyone. Some attrition is for good reasons. Not everyone is meant for a career in the military, and not all of those who aren’t get filtered out at the end of their initial contracts. We also can’t just let people sit on their cans waiting for retirement. Some type of winnowing out still has to happen.

In a non-up-or-out system, officers would be subject to periodic retention boards. Re-enlistments would no longer be nearly automatic after the second term. People should either be pulling their weight on the way toward being a leader of a large unit or developing into a subject matter or skill expert. The overall retention rate would still be greater than today; at the same time, the military can’t let permitting a lack of advancement in rank be an excuse for laziness.

Individuals would be given guidance as to whether they should maintain a traditional career path toward senior leadership or are more suited to specializing. The military would get the most out of each individual’s talents, while saving time, money, and resources through reduced turnover.

No one is winning under the current system — not the military and not its people. The military has to keep high standards, while realizing that in the real world, every one of its people has different talents. If it is to succeed, it had better get them most out of each and every one of them.

~popular_source-pageview
carl forsling
senior specialist
up or out