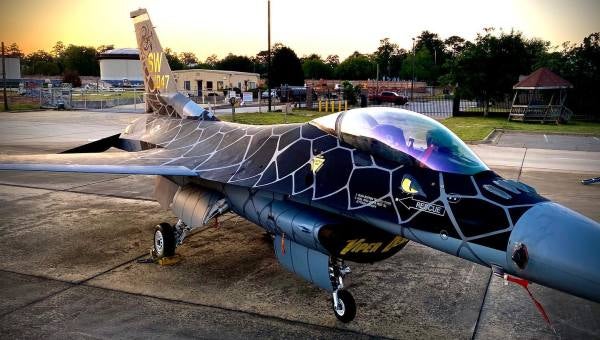 That at least is the impression one gets from new pictures of the team’s star jet, which now boasts an objectively awesome snakeskin paint job dubbed 'Venom' that ups the already-sky-high sex appeal of one of the world’s best multirole fighter aircraft to near-disastrous levels.

“Inspiring the next generation of pilots and maintainers,” the Viper team wrote modestly on its Instagram and Facebook pages on Friday, knowing full well that they just caused a nationwide wave of computer and smart phone problems from all the saliva slopping down on keyboards and touchscreens from the mouths of fawning aviation fanboys and fangirls like yours truly who greedily covet the Mach 2-capable aircraft.

Unfortunately, due to the novel coronavirus (COVID-19), we fans may not be able to enjoy this new paint job in person, as the Air Force has cancelled all large gatherings like airshows through June 30.

That could change after June 30, but for now we must be content to witness the Viper’s shining glory from afar.

Full disclosure: midway through writing this article, this reporter discovered that the Viper team made the paint changes over a month ago, making this reporter late to the game.

According to the Viper Facebook page, the team had been working on the project since December so that it would be ready for the 2020 airshow season. But then COVID-19 reared its ugly head.

“While it was scheduled to be completed in March, due to the COVID-19 pandemic we paused production to ensure the safety of our crews, but we're now proud to introduce you to 'VENOM’,” the team wrote. “The snake scales across the body of the aircraft fit the namesake of the jet and our signature black and yellow colors feature prominently from nose to tail.”

The team added that the project was meant as a special experience for fans and as an extra bit of jet fuel to inspire Americans to join up. And boy is it tempting.

But next year, Air Force, we request something along the lines of the Venom comic book super villain. Just a suggestion.