The Virginia-class submarine USS Indiana returned to its homeport in Groton, Connecticut in late September rocking what appears to be an unofficial battle flag 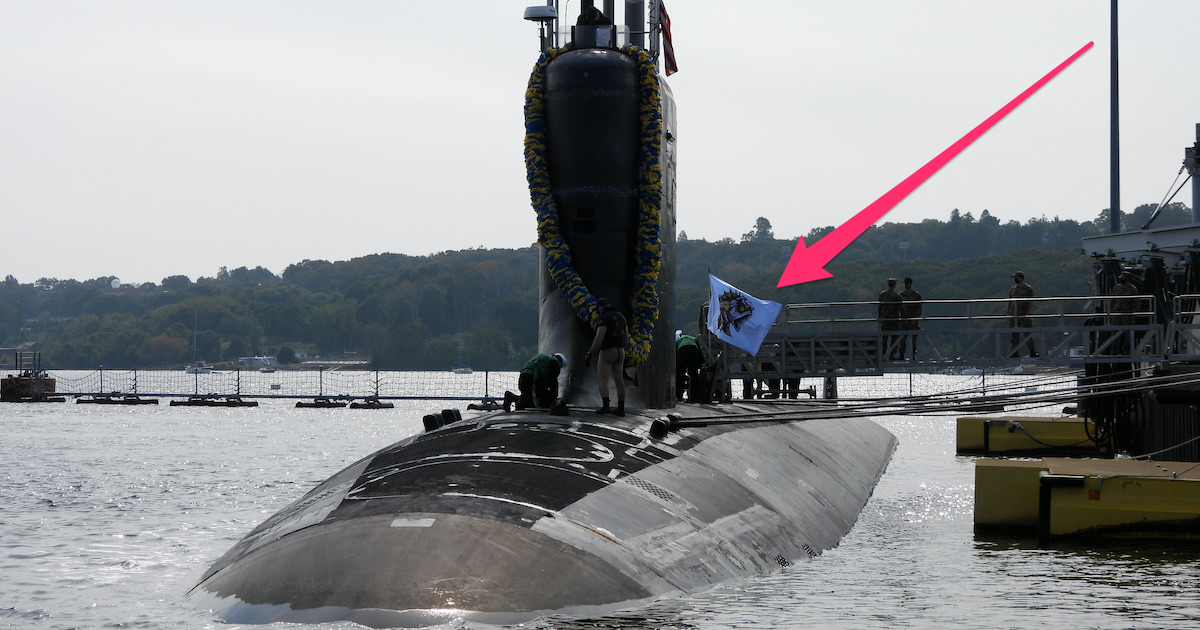 The Navy’s guided-missile destroyers aren’t the only warships that have taken to flying unusual banners on their way back to port in recent months.

The Virginia-class submarine USS Indiana returned to its homeport of Naval Submarine Base New London in Groton, Connecticut in late September rocking what appears to be an unofficial battle flag, according to photos published by the Defense Visual Information Distribution Service.

The flag appears to portray a belligerent fish wearing a pair of sonar muffs and brandishing a Mark 48 submarine-launched torpedo.

Like the submarine’s official crest, the banner also appears to contain the 19-star ‘Indiana Torch‘ emblazoned on the fish’s fin. Designed by artist Paul Hadley for the state’s centennial in 1916, the Indiana Torch was adopted as part of the state flag the following year.

Commissioned in 2018, the Indiana’s return to Groton marked the end of its maiden deployment, during which the submarine avoided most contact with the outside world in an effort to duck the reach of the novel coronavirus (COVID-19), according to the Navy.

Beyond two post visits to Rota, Spain, the ship spent its time executing Chief of Naval Operations Adm. Mike Gilday’s maritime strategy in the 6th Fleet area of operations, according to the Navy.

“Despite the challenges associated with COVID-19, the crew performed exceptionally well and conducted sustained operations at sea while demonstrating their nuclear-powered attack submarine’s endurance and capabilities to accomplish any assigned tasking,” Submarine Squadron 12 commodore Capt. Andrew Miller said in a statement.

“It is an extraordinary time in world history and Team Indiana has done a great job of maintaining forward-deployed operational readiness amidst a global pandemic for the last six months.”

How permissible it was for the Indiana to actually fly this unofficial banner is an open question. Like the USS Kidd’s Jolly Roger or the USS Paul Hamilton’s Moultrie Flag, the Indiana’s flag appeared just months after the Pentagon issued a memorandum restricting exactly which flags can be flown at U.S. military installations, an effective ban on the Confederate flag in the midst of a growing campaign to strip the symbols from bases across the country.

“Flags are powerful symbols, particularly in the military community for whom flags embody common mission, common histories, and the special timeless bond of warriors,” Defense Secretary Mark Esper wrote in the memo at the time. “The flags we fly must accord with the military imperatives of good order and discipline, treating all our people with dignity and respect, and rejecting divisive symbols.”

As Task & Purpose previously reported, the only flags explicitly permitted at U.S. military installations include flags of U.S. states and territories; military service flags, general officer and Senate-confirmed civilian flags; and the POW/MIA flag, among others. However, the Pentagon policy does allow units to fly “ceremonial” flags, although it’s unclear if the Indiana’s fish banner counts in this case.

Either way, we salute you, crew of the Indiana: Until someone says otherwise, let your freak flag fly.

Related: It’s not just the Confederate flag: the Pentagon’s new ban may apply to the Jolly Roger