Why Modern Veterans Should Come To Terms With Obamacare

A lot of military folks and veterans don’tlike Obamacare, and I understand why. Through our military service, we learned the... 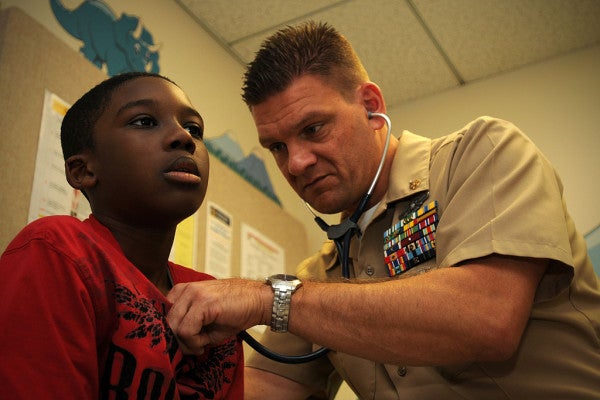 A lot of military folks and veterans don’tlike Obamacare, and I understand why.

Through our military service, we learned the value of self-reliance and accountability. Many veterans, myself among them, don’t like the idea of freeloaders who contribute nothing and receive loads of benefits in return. We also know that the Department of Veterans Affairs has its problems, and we don’t want to see the problems of government-run health care inch into the lives of other Americans.

Leaving the Marine Corps is what completely made up my mind on the Affordable Care Act.

When I separated from the service in October, I had a choice. I could join my wife’s insurance plan, or I could find my own coverage using the Health Insurance Marketplace, an online platform where you can shop for an insurance plan by browsing the options available in a particular state.

Using my wife’s plan would have cost me about $400 per month, and years ago, that would’ve been my best option; either that or contacting numerous health insurance companies, one by one, to compare rates and benefits.

By using the marketplace, I found a plan that provided me the same coverage as my wife’s employer’s plan for $150 less per month. That’s almost $2,000 per year in savings.

I didn’t receive any kind of subsidy for health insurance. My wife and I simply have too much income to qualify for a subsidy, and if you have employer-offered coverage, you can’t receive one. But the marketplace still saved us the equivalent cost of a good grocery run every month because it forces insurance companies to compete in a free market on fair terms with consumers.

And that’s really what the Health Insurance Marketplace is: A place where consumers can quickly and easily compare the costs and benefits of different equivalent products. It’s as socialist in concept as Wal-Mart or Amazon.com.

But here’s the thing, even at the marketplace rate health insurance is expensive. Coming from military life where insurance is a “no-cost” benefit, I had no idea how much, so I looked it up.

According to the Kaiser Family Foundation, it costs almost $17,000 per year for an average policy to cover a family of four. That made me to wonder how electricians, brick masons, and auto mechanics — folks earning maybe $40,000 per year — can can afford to insure themselves and their families. The truth is: they can’t, and that’s where the subsidies, supported by taxpayer dollars, come in.

But these subsidies aren’t a free ride for anyone. Yes, they reduce the cost of insurance based on factors like income and size of family, but in doing so, they enable more people to pay what they can, giving them an alternative to going uninsured.

Another unpopular facet of the Affordable Care Act is that can act like a tax, and that’s true. There is a tax penalty for those who choose not to insure themselves and their families. But, remember: This isn’t a tax on those who have insurance. This is a tax on people who aren’t getting insurance.

This tax serves as a financial incentive for folks to do the responsible thing. It discourages people from going without insurance, incurring large medical bills, and forcing hospitals to recoup losses through higher prices and increased insurance rates.

Is the Affordable Care Act perfect? No, of course not.

There are horror stories of folks losing their old plans, and being forced to pay more for a new one. But, keep in mind, if an old plan was tossed away, that means it was providing less coverage than a Bronze Plan under the Affordable Care Act.

So the act forces insurance companies to offer plans that actually do what they’re supported to do by offering benefits like semi-sane deductibles, reasonable co-pays and access to preventative health care — not just take in premiums for plans that offer “health insurance” in name alone.

A valid concern of many veterans, especially those who have dealt with the Veterans Administration, is a dislike of government-run health care, and I certainly appreciate any veteran who hopes to prevent other Americans from dealing with that kind of monster.

But the Affordable Care Act isn’t about socializing health care or bringing treatment under government control, but about putting laws in place so that consumers face insurance companies on understandable terms. We have similar laws in all manner of markets, from housing to credit cards.

Some folks argue that it doesn’t go far enough, that health coverage is a human right and should be granted to everyone at no cost. Others argue that even the subsidies go too far, and that those who can’t afford full premiums should find better employment.

But more often than not, it seems that the debate on the Affordable Care Act stalls in ideologies. However, that argument between socialized health care, and socialism in general, and a purely capitalist society is completely different than one on the strengths and weaknesses of Obamacare.

I believe we, as military veterans, are better than that, and we can rise above partisan rhetoric. If we’re going to debate the Affordable Care Act, let’s debate it on what it is: A capitalist solution to an enormous social problem.