These Veterans Are Realizing Their Dreams As Small-Business Entrepreneurs

During the Veteran Women Igniting the Spirit of Entrepreneurship event in Washington, D.C., on May 30, veteran and military-spouse entrepreneurs... 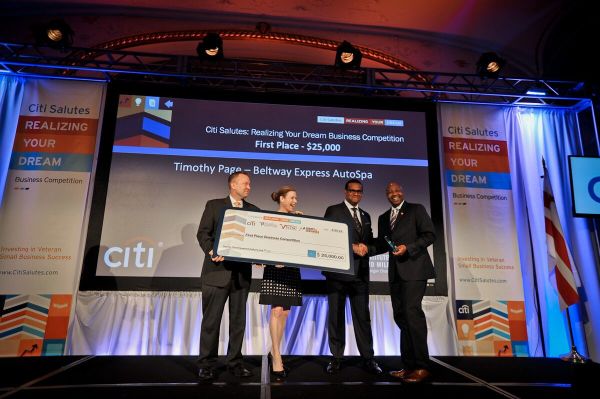 During the Veteran Women Igniting the Spirit of Entrepreneurship event in Washington, D.C., on May 30, veteran and military-spouse entrepreneurs gathered to workshop ideas, network and participate in break-out discussion sections.

The event was put on by the Institute for Veterans and Military Families, and included the Realizing Your Dream competition. Six finalists from the U.S. Small Business Administration’s Boots to Business and V-Wise entrepreneurship training programs presented their business models and competed for a share of $130,000 seed funding from Citi Foundation.

The competition involved a “Shark Tank”-style Q&A; session, based on the ABC television show format where contestants pitch ideas to a panel of well-known entrepreneurs. Coincidentally, last year’s V-WISE winner, Air Force veteran Kristina Guerrero, appeared on Shark Tank and walked away with a $100,000 investment in her business. This year’s winner for the V-Wise bracket was Air Force veteran Angela Cody-Roeget, and her startup company, Major Mom.

Angela Cody-Roeget, founder of “Major Mom,” speaks during the Realizing Your Dream Competition, May 30.

Cody-Roeget’s business model was born from her own experiences as a mother shortly after transitioning out of the military, where she worked as a nuclear and missile operations officer.

“I was in nuclear weapons most of my career. We have ops manuals and checklists and you do not stray from the checklists and ops manual,” Cody-Roeget told Task & Purpose in an interview. “That environment took my natural organizing skills and taught me how to take a lot of chaos and create order out of it.”

After serving on active duty in the Air Force for eight years, and in the reserves for five, Cody-Roeget realized the value of organization, and began to apply it in her own home, and then later, her friends’ homes.

“All of the moms I was meeting when I got out, civilian moms, that didn’t seem to know how to create order and organization, not perfectionism or anything like that, but just having a home for everything seemed to be foreign concept, like putting things away everyday,” she explained. Cody-Roeget’s business helps parents manage their home in a more efficient way. “So I started to grow a place in my heart for that, so I just thought it’s come so naturally to me why not just help people do this.”

For the Boots to Business bracket, Tim Page won first place for his Beltway Auto Spa, a car wash he plans to open at a key intersection in Washington. Page, who served as a signal officer in the Army for 26 years, went on terminal leave the day before the competition.

“Although I had a very successful career, I needed to have something where I had more in what I need to do for my future,” Page told Task & Purpose. He decided to leave active duty and create his own business after the 2013 government shutdown. “That correlated with my decision to retire, and the decision to go into business.”

The competition doesn’t just benefit the winners, but actually helps other participants as well, explained Mike Haynie, executive director and founder for the Institute for Veterans and Military Families at Syracuse University. “Whether or not someone’s walking away with money, they’re all walking away with a plan that’s much further developed than when they started.”

Both Cody-Roquet and Page attribute their success at the conference to what they learned in the military.