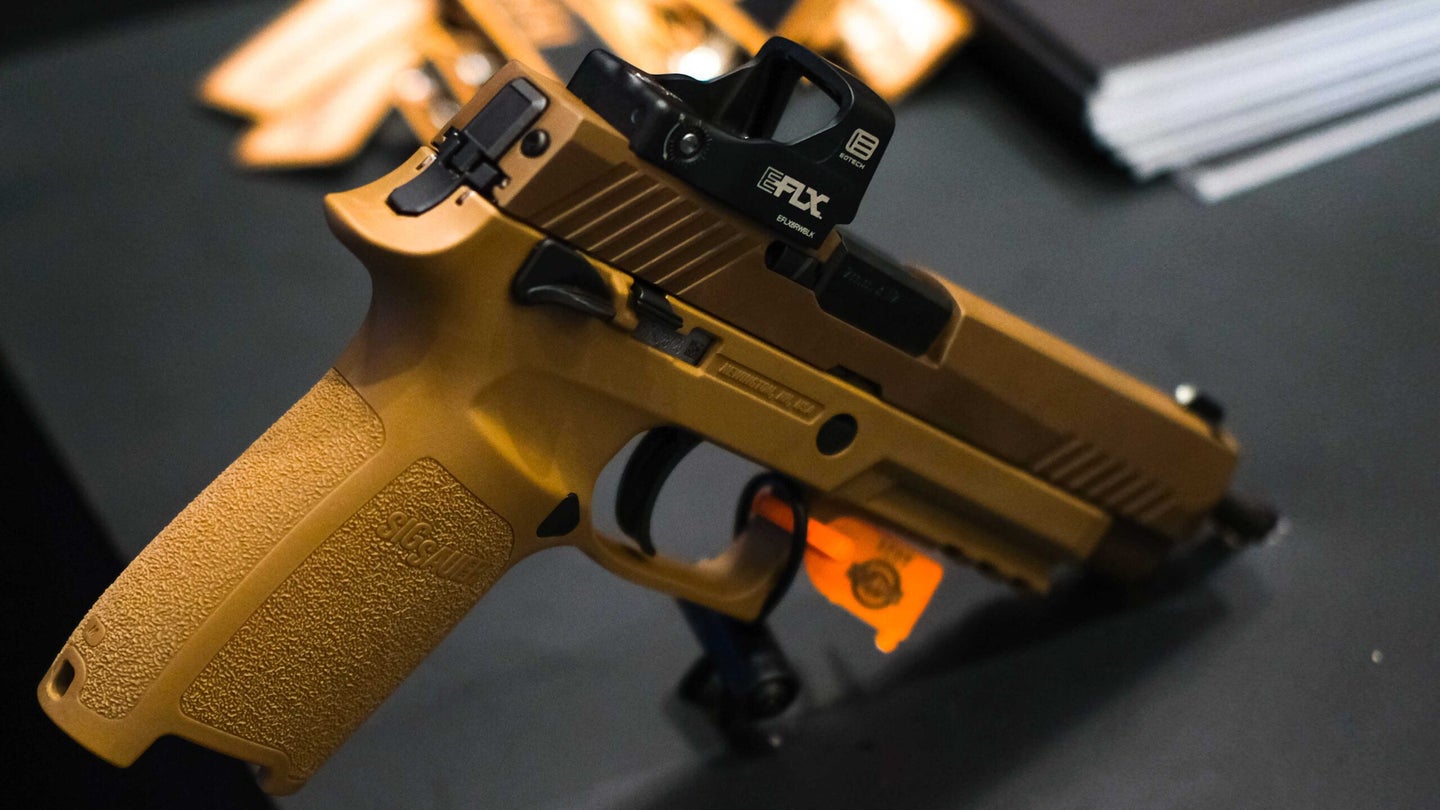 EoTech is no stranger to the world of powered optics, known primarily for their ubiquitous holographic rifle sights. However, the company hasn’t spent much time in the world of pistol red dots sights, a market currently dominated by the Trijicon RMR, Aimpoint ACRO, Leupold Deltapoint Pro, and Chinese brand Holosun.

EoTech opted to arrive fashionably late to the market at SHOT Show 2022 in Las Vegas, Nevada with the debut of the new EFLX pistol red dot optic.

“The new EFLX Mini Reflex Sight is EOTECH’s first venture into reflex technology optics,” the company announced. “Ideal for professional use, hunting, home defense, and more, the EFLX can be used on a variety of platforms.”

The obvious question that will face the EoTech in the coming months is whether the company has successfully crashed the pistol red dot optic party, or showed up a day late and a dollar short. But there’s also another question worth considering: Is this new optic good enough to become the U.S. Army’s new red dot sight of choice?

“We’re going after that M17 Army contract,” EoTech director of product management Mark Miller said at SHOT Show 2022. “This whole thing from the ground up was developed for that professional user.”

When the Army put forth contract requirements for the Modular Handgun System — now known as the M17 and M18 pistols — the service detailed a need for a sidearm that could mount a red dot optic. Of the options on the market, several Army units chose the Leupold Deltapoint Pro (DPP) and had the new handgun’s slide drilled to accept this optic. The problem, however, is that the DPP has a reputation among some firearms enthusiasts as fragile, a potential problem documented in detail in shooting expert Aaron Cowan’s brutal 2018 torture test of the optic. The other issue is that the DPP uses a different mounting plate than the Trijicon RMR or the Aimpoint ACRO optics that are currently in circulation within the U.S. military, and short of using an adapter plate or recalling and re-milling new slides for thousands of M17 and M18 pistols with an RMR-profile red dot cutout, the Pentagon is stuck with the DPP profile.

Enter EoTech, whose EFLX pistol red dot optic is specifically designed to drop into the DPP mount on the M17 and M18 pistols and, at $389 a pop with a comprehensive warranty, priced competitively with the hopes of scoring a contract with the Army. Pronounced “E-Flex” (no doubt as a play on “reflex”), the EFLX is an American-made, ruggedized, open-emitter pistol red dot. It either features a 3 or 6 MOA dot as its reticle and is powered by a single top-loaded CR2032 battery, providing it with a 20,000-hour battery life. The sight features simplified buttons for adjusting the brightness, a night vision brightness mode, and a 12-hour auto-off to save battery life. As a bonus feature, the EFLX features an aspect ratio that’s similar to the EoTech holographic sights, and which lacks the large, high-profile design of the DPP, which gives EoTech aficionados a further dose of comfortable familiarity.

The EFLX is more than just a contract snipe attempt: it’s a capable red dot that fits into an existing mount profile, meaning that the market isn’t getting yet another type of red dot to consider when gunsmiths are milling out a pistol slide. However, first impressions of the EFLX aren’t universally positive and compared to other red dots, this optic is light on features as well as price.

For starters, the EFLX opts instead for the 12-hour power-down feature, meaning that you’ll have to manually check to make sure the optic is powered up before use every day. By contrast, Holosun features “shake awake” technology on many of their optics, which means that even if you leave the optic on, it’ll enter into a sleep mode if you leave it motionless for a certain period of time, reactivating the moment that you pick the weapon up. This provides peace of mind that the optic will be ready no matter how long it’s laid dormant.

Another point of contention for some observers is the fact that this is yet another open-emitter pistol red dot. What this means is that the emitter is exposed to open air, and simply projects the dot through the use of a LED against a pane of glass. This is a con in some people’s eyes because it means there’s a possibility that dirt, moisture, or other debris will foul the optic and make it so that you can’t clearly see your point of aim. Closed-emitter sights like the Aimpoint ACRO protect the LED from these hazards and ensure that the sight is more durable, at the expense of some bulk and weight. Finally, the 20,000-hour battery life isn’t especially high when compared to the ACROs stated 50,000 and the RMRs stated 40,000.

As a final concern, EoTech still has to contend with the popular memory of the fallout over a lawsuit filed against their former parent company, L3Harris, regarding thermal drift in their holographic rifle optics. While EoTech has since rectified the issues that caused the controversy, many buyers approach the company with some hesitance now, and the episode may prompt some added skepticism from prospective buyers. That said, EoTech counters this with its rock-solid warranty policy, which should add a layer of confidence for those looking into the EFLX.

None of these cons are to say that the EFLX doesn’t serve a purpose, and it’s an optic that fits into a specific goal — which is to fit into the footprint of a Leupold Deltapoint Pro. The EFLX also fixes many of the issues of the DPP optic while also coming in significantly less expensive than the ACRO or RMR. In this regard, it seems to succeed, offering an unholy hybrid of an RMR and a DPP for less. However, only time and further testing will tell if the EFLX lives up to its stated goals — and if the Army will even consider adopting it as the new pistol red dot for the Modular Handgun System.