How 2 Chicago Vets Are Changing The Stereotypes Around Wounded Warriors

Editor’s Note: This article was written by Aaron LeMay, a Communication Chair for Roll Call Chicagoland and Recruiting Programs Specialist... 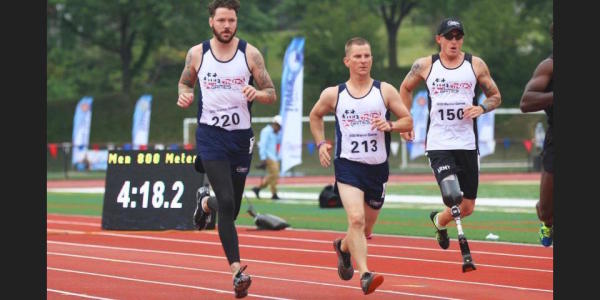 Editor’s Note: This article was written by Aaron LeMay, a Communication Chair for Roll Call Chicagoland and Recruiting Programs Specialist at Exelon Corporation, a Hirepurpose partner.

RJ Anderson Jr. and Ryan Shannon are two veterans who have overcome a lot more than most. In November 2012, Anderson was serving in the Army as a helicopter technician, when a motorcycle accident left him paralyzed from the chest down. Shannon suffered from a brain injury, a broken left foot that resulted in paralysis, and post-traumatic stress disorder after eight years in the Navy.

Like both men, and the 260-plus wounded warriors who are participating in this year’s Department of Defense Warrior Games being held in Chicago June 30 through July 8, the journey to get there has tested them over and over again. Like many, their journey has proven their resilience and what they are truly made of.

The Warrior Games, more specifically adaptive sports, has given Anderson and Shannon purpose again after their service and sustained injuries. Doctors told them they wouldn’t walk or run, but they were proved wrong. With school, family, and now the Warrior Games, this competition has given both men purpose and drive. The drive for them now is making the 2020 Paralympic Games in Tokyo where both will be looking to solidify spots to compete; Anderson in Shooting (air rifle) and Shannon in Sitting Volleyball.

While they both have been making various appearances throughout the Chicagoland area helping to promote the upcoming games, their stories and messages are being heard well beyond corporate sponsors and hosts. This message is hitting home for dozens of veterans in the Chicagoland area trying to overcome another challenge many veterans face: Purpose after service.

On June 6, Anderson and Shannon were featured in a panel discussion at the Roll Call Chicagoland veteran networking event as part of the professional development segment. They shared the struggles they have overcome and their personal journeys in finding their own purpose after service.

“These injuries don’t have to define us. That is what I told myself. All this stuff is happening and doctors said this and that, but why do they get to pick if I can go run again. Why can’t I choose that?” Shannon said. Shannon did teach himself to run again. He set two Warrior Games records last year in track.

Anderson also received devastating news when a doctor told him he would never walk again, but his drive and commitment ingrained from his military service would not allow him to give up. He is currently making great strides to walk despite what others have said.

During the panel, Anderson and Shannon both spoke of the motivation they gained while participating in the Warrior Games as they watched their fellow teammates. “The complexity, teamwork and the motivation and drive in my other teammates when they start picking it up and moving it really started driving me,” Shannon said.

“You have to allow yourself to be human. Things happen in life that are out of your control. It’s how you respond to it that matters,” Anderson echoed. “Things happen. You have to forgive yourself and push forward. Be better than what you were yesterday. Give yourself a goal and push for it. If what you’re doing isn’t working, try something new. You don’t know what you are made of until you step out of that box.”

While many of us will be cheering these athletes on from the sidelines of the Warrior Games, the attendees of Roll Call Chicagoland’s event have taken it a step further to truly build that network of support and camaraderie, which is something that keeps us all moving forward and driving powerful results.

Roll Call Chicagoland was formed by corporate and community partners, veteran affinity group members, along with non-profit agencies and educational institutions, who meet each month providing professional networking, support, development and camaraderie. Roll Call Chicagoland has answered the call and made a commitment to providing a best-in-class platform for those that dedicated everything to our country.

To learn more about the upcoming DoD Warrior Games and for ways to volunteer and attend visit www.dodwarriorgames.com.

If you’re a veteran, active-duty service member, reservist, spouse or someone looking to further engage with military talent and connect with other like-minded individuals to strengthen your career or journey, visit Roll Call Chicagoland at www.rollcallchicagoland.org.