The Case Against Isolationism, According To America’s Greatest Military Thinkers

Isolationism is on the rise in America. Promises of negotiating “beautiful, better deals” by imposing tariffs feed the appetite of... 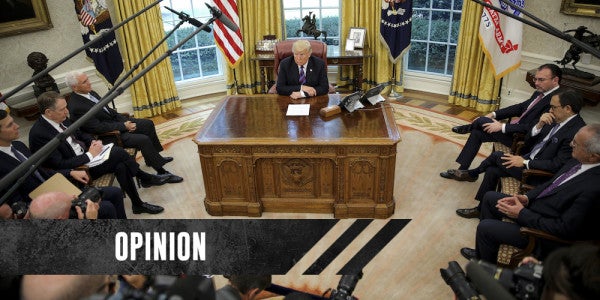 Isolationism is on the rise in America. Promises of negotiating “beautiful, better deals” by imposing tariffs feed the appetite of those who blame foreign trade for all of their domestic woes. Threatening to abandon allies in lands U.S. service members died in battle to liberate because “I don’t know why they’re there” is high statesmanship. The #MAGA crowd, however, can’t square why the U.S. military’s high command sides with the so-called “globalists” against them. Why can’t they see that ‘Murica doesn’t need the world?

The greatest military thinkers in our nation’s history beg to differ. To them, the United States is truly great, even providential, because our national character begs for engagement with the world at large. Negotiating “better deals” and then retreating inwards is more than ahistorical — it’s a cowardly refutation of our national character.

America has been open to the world through its seafaring commercial interests since the colonial period. Interest in building and maintaining a navy only peaked when commerce was threatened, particularly during the Quasi-War with France in 1798, the Barbary Wars beginning in 1801, and the War of 1812. Otherwise, America chose to keep its navy almost non-existent until the Civil War.

Captain Alfred Thayer Mahan saw things differently. Westward expansion was completed in the 1880s and the country’s population rose steadily. Watching from his post as a professor of naval history and tactics at the Naval War College, Mahan understood North America was too small of a place for Americans. New ports on the Pacific coast meant an increased American commercial presence in the Asian markets. A presence that would need defending.

Embracing Manifest Destiny, Mahan advocated for a navy that would enable Americans to vault into the world carrying that spirit with them. Mahan looked out at the world not with suspicion, but with an eye towards opportunities for greatness. Imbued with his own strong Episcopal beliefs, Mahan saw Americans themselves as the key strength of the U.S. Navy he envisioned.

“At bottom, however, the temperament of the American people is essentially alien to such a sluggish attitude,” Mahan noted in 1890. “Independently of all bias for or against protection, it is safe to predict that, when the opportunities for gain abroad are understood, the course of American enterprise will cleave a channel by which to reach them.” He was unequivocal in his lectures and writing; Mahan’s America was unafraid.

Securing American enterprise around the world required operational plans to support Mahan’s envisioned presence, and Marine Lt. Colonel Earl Hancock “Pete” Ellis embraced this vision of America as a force to be reckoned with. Protecting the nation’s trade, particularly in China by enforcing the Open Door Policy, was a matter of war and peace. Ellis predicted in 1921 that Japan would preemptively attack America over it’s expanding commercial enterprise. Unlike the isolationists of his time, he understood what the U.S. stood to gain from interacting with the world was worth the risk of incurring such an attack.

“In the past, the efforts of people’s have been concentrated on the development of local natural resources,” Ellis wrote at the Naval War College in 1911, “but as populations increased and local resources were exploited to the utmost nations were forced to seek outside activities. Today foreign trade is of vital importance to most nations and will in the near future become of vital importance to all.”

An America that isolates itself behind its borders was not an option. If the country was to prosper it needed to prepare for the conflicts commerce with regional powers might bring. Ellis envisioned a Marine Corps proficient in multiple missions, with amphibious assault as its primary specialty, to work towards this end. Thanks to Ellis, Americans had a framework for how to fight for their place in the Pacific during the World War II; indeed, he was the architect of the island-hopping campaign the Corps executed.

If America was to be active in the world, it had to be at the cutting edge of new technologies. Maj. Gen. William Mitchell of the Army Air Corps saw America and Americans as the leaders of an emerging aeronautical era. “We shall see a greater development of commercial aviation in the United States than in any other country in the world. Our country is suited to it…our people take to it very naturally.” An airplane’s ability to shrink distances meant new and improved commercial opportunities in addition to existing land and sea routes. Air travel, along with travelers, could not possibly be confined to a continent. Mitchell saw the development of air travel and its military applications as requiring as much courage as the first seafaring explorers. Americans had that courage.

Neither Mahan nor Ellis nor Mitchell claimed America would be perfect. But bending the world to America’s will wasn’t the point; the objective of Mahan, Ellis, and Mitchell was to gain prosperity and security for the United States. Culture and ideas, however, follow commercial interests. While each man advocated for hard power to establish a place among nations, the soft power that flows from such a place, however, can shape the world in more concrete ways than battleships, regiments of marines and bombers can. Americans are the conduit of both forms of power. Giving up on America’s place in the world means giving up on who we are as a people.