Actually, call him Lance Cpl. Boombastic. Here at Task & Purpose, we keep track of all the important news feeds:... 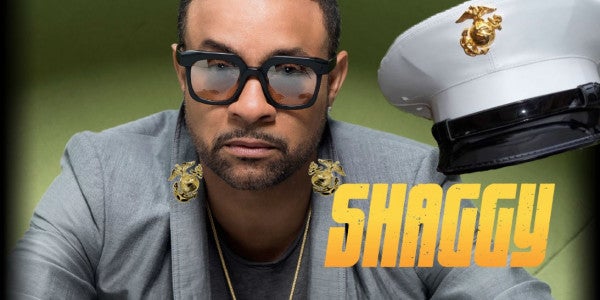 Here at Task & Purpose, we keep track of all the important news feeds: downrange news, service news, Shaggy news. So we were all over this morning’s Marine Corps Times announcement that Shaggy, he of the late-’90s dank ragga beats, is taking his international tour to three U.S. installations in Japan later this month.

The headline for their story: “Singer and Marine vet Shaggy to perform for troops in Japan.”

Somehow, in the two decades since his music got me to second base on a Virginia Beach dance floor during weekend liberty, I failed to learn that Shaggy was a fucking Marine.

This dancehall legend — whose hits include “It Wasn’t Me” and “Go Fuck Yourself” and who believes the way to defeat ISIS is to “bag some Jamaican weed and distribute it” to the evildoers — was, in fact, an artilleryman with the 5th Battalion, 10th Marines out of Lejeune, and he deployed to Saudi Arabia for Desert Shield and Storm in 1991.

Get yourself some Shaggy facts, courtesy of Military Times:

Not quite the model Marine — he was busted down in rank twice — he was better known for his colorful cadence calling and already had hit a single before he left active duty.

“The highest rank I got was lance corporal. My big problem was being AWOL. I was driving up to New York every weekend to do music,” he told Military Times in a 2011 feature story. “Sometimes I got back late. And I'm a guy with a big mouth, and I mouthed off a lot. So, you know, things like that will get you busted.”

Anyway, if you’re on Hansen, Atsugi, or Iwakuni later this month and want to catch Mr. Lover Lover singing about all the things Master Sar’nt says you oughtn’t do, check out the details here.

That still gives you a couple of weeks to get comfortable with certain facts. For example, though he swears that “Boombastic” definitely “has nothing to do with the Marine Corps,” Shaggy was, in fact, a fucking Marine, and your worldview must adjust to this new reality.