What’s really inside the gold ball on top of military flagpoles?

Inside is a razor blade, a match, and a bullet, or so the legend goes. 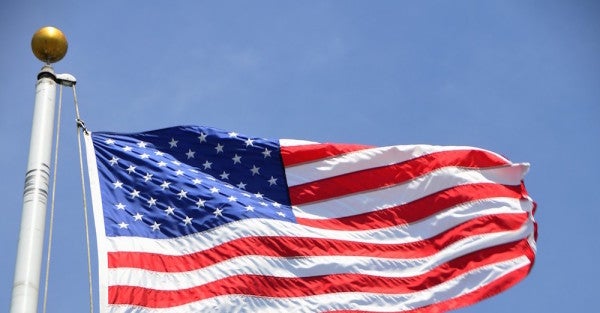 Picture this: International diplomacy fails, and the world spirals into war. Foreign armies invade America, dealing crushing blows, and you are the only person left to defend your base. Weapons are scant, but you need to keep Old Glory from falling into enemy hands. What do you do?

It’s simple. Scale the flagpole. At the top sits a little golden sphere known as the finial ball. Inside is a razor blade, a match, and a bullet. You must use the razor blade to cut the stars and stripes from the American flag, the match to burn the remains, and the bullet to defend the base or shoot yourself … depending on the circumstance.

At least, that’s what the legend says. And you’ll be hard-pressed to find a service member who hasn’t heard that story.

But the boring truth is that the finial ball is there for pole maintenance. “A number of military flagpoles were at one time topped with gold-colored eagles, but these proved impractical because flags would become hopelessly entangled on them during high winds; the switch to spheres eliminated this problem,” a fact-checking analysis from Snopes concluded.

Here’s The Ridiculous Story Behind A ‘Rock Or Something’

“Their purpose is to ornament solid flagpoles and keep water out of hollow ones,” according to Snopes, which said it was not surprising that the flag was the “subject of legend which brings together patriotism, horror, and whimsy in a curious belief that celebrates the bravery of American soldiers while reminding all that the duty expected of these warriors is limitless.”

While rating the myth as false, Snopes also noted that while “the flag has great symbolic importance, defending the bases over which it flies from attacking forces has far more direct and practical importance, and it’s hard to imagine any right-minded soldier’s taking time away from his duty of repelling invaders to engage in ritualistic flag destruction.” It’s also not plausible that a soldier would see overrunning enemy troops and take the time to climb a flagpole to retrieve hidden items, the site wrote. “Although this is a charmingly romantic bit of lore, it’s also a wildly impractical one.”

Despite how logical that sounds, all kinds of rumors about the contents of the ball continue to swirl across the services.

Some say instead of a razor blade, there is a single grain of rice meant to give a soldier strength to burn the flag and take his or her own life. Others suggest there is a penny, so America will never truly be insolvent.

In truth, if you find yourself alone, overcome by foreign fighters on American soil, the odds of being able to perform this flag protection ritual are highly unlikely. And it’s probably worth noting that capturing the flag isn’t exactly how nations win wars.