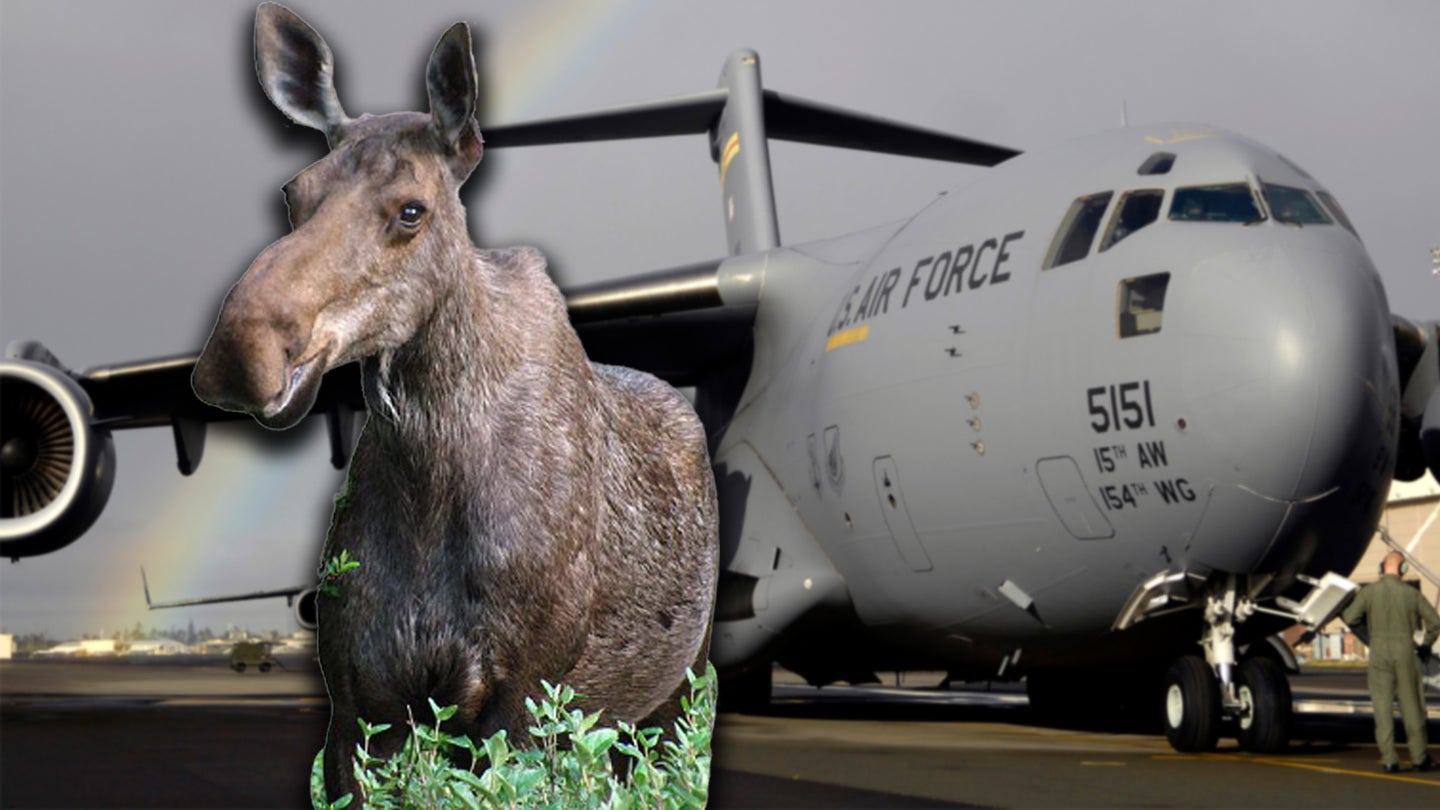 Air Force jets have a lot of great nicknames. The legendary A-10 Thunderbolt II attack plane is called the Warthog because of its weird-looking appearance and pugnacious, close-to-the mud spirit; the F-16 Fighting Falcon is called the Viper because it resembles the eponymous spacecraft in Battlestar Galactica (according to some accounts), and the sexagenarian B-52 Stratofortress is called the BUFF (big ugly fat f**ker) because, well, that’s what it is.

And then there’s the C-17 Globemaster III, the 30-year-old cargo jet that can do anything from drop paratroopers to carry a 69-ton M1 Abrams Battle Tank, and it’s got a great nickname: The Moose. While ‘Moose’ seems like the perfect moniker for a big, strong, slow-moving aircraft like the C-17, the real reason for the nickname may surprise you. The real reason, believe it or not, is because the aircraft actually sounds a lot like a female moose in heat.

That’s right, when it’s mating season for a female moose (called a cow), she emits a “wail-like bawl” while male moose respond with “a heavy grunt-like noise that can be heard up to half a kilometer away,” according to Canada’s Northwest Territories Department of Environment and Natural Resources.

How the hell does a C-17 sound like a cow in heat? The internet tells us why:

“During ground refueling, the aircraft has pressure relief vents, which when in use sound like a moose call!,” wrote the C-17 West Coast Demo Team in a Facebook post in September. And yes, you read that right, the Air Force has a C-17 demo team that performs at airshows throughout the year.

“Airmen have affectionately nicknamed the C-17, “The Moose” for the distinct sound it makes during refueling,” said Darrell Lewis, the historian for the 437th Airlift Wing. “When refueling, pressure relief vents on the aircraft make a moose call sound.”

Technically, the moniker even has its own line of unofficial merchandise.

“It is a popular nickname, with squadron posters and t-shirts dedicated to it,” he said.

“It’s pretty common to hear the C-17 called the Moose at work,” one Air Force pilot told Task & Purpose. “We are all part of the Moose Gang. Just as the C-130s are the Herc Gang, and the KC-135 are the Gas Wagon Mafia. It’s a cool uniter amongst aircrew.”

The “Moose” nickname is far from the only cool feature on the C-17. Despite its size, the Moose can fit into some pretty tight corners. According to the Air Force, the plane can land on runways as short as 3,500 feet (about two thirds of a mile). By comparison, the much-larger C-5 Galaxy requires about 6,000 feet at the absolute minimum, according to Travis Air Force Base and the Government Accountability Office.

The C-17’s high wings, slats and externally blown flaps give the plane the lift it needs to take off and land on such short stretches, according to the Air Force. Those features also probably come in handy when the moose droppings hit the fan, like in October when a C-17 made a belly landing at Kandahar Air Field, Afghanistan. The nose landing gear was stuck in the belly, but the aircraft came to a safe halt and no injuries were reported.

On top of that, the amenities in the C-17 are pretty slick: the plane comes with crew bunks behind the cockpit for aircrew to sleep in, a latrine, an oven, a hot pot, and a refrigerator.

“I really cannot complain about our aircraft because we have some really wonderful amenities that are provided and that make it a lot easier to do those long 17-hour legs or 13-hour non-stop on a single tank of gas,” said C-17 pilot Maj. Courtney ‘Voodoo’ Vidt on the Fighter Pilot Podcast last month. Fighter pilots, by contrast, are stuck in one seat in a tiny cockpit with barely any leg room.

“I have the utmost respect for fighters and especially for their ocean crossings,” she said. “I don’t know how they do it and I am so impressed that they do it.”

So there you have it: when it comes to carrying heavy objects onto tiny airfields, or just having a nice place to stretch your legs, the Moose is the plane to choose.